CT scan and MRI noted thickening of the superior and lateral rectus muscles and adjacent tissues in the left eye.

A 46-year-old African-American woman saw an optometrist because of 1 month of painless progressive vision loss in her left eye. She denied any double vision, flashes, floaters, redness, headaches or jaw fatigue, but she admitted to a 100-lb. weight loss over the last year, which she attributed to personal tragedy and stress.

She had no ocular history and had never had an eye exam. Her medical history was positive for hypertension, asthma, obesity and depression. She had a benign scalp nodule removed in the past. Her family history was significant for hypertension and stroke in her mother. The patient smoked half a pack of cigarettes a day for 30 years and initially admitted consuming half a pint of vodka a day four times a week, but later denied drinking any alcohol.

On examination, visual acuity was 20/20 in the right eye and counting fingers at four feet in the left eye. IOP was normal. The patient had decreased red saturation and brightness in the left eye compared with the right eye and a relative afferent pupillary defect in the left. She had proptosis of about 5 mm and slight restriction of left extraocular muscle movements. Anterior slit lamp exam was unremarkable. On dilated fundus exam (Figure 1), optic nerve pallor was noted temporally in the left eye with thinning of the nerve fiber layer. Bilateral prepapillary arterial loops were also noted at the optic discs. 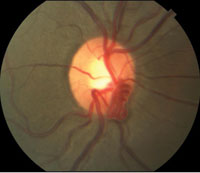 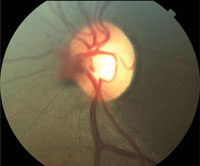 Humphrey visual fields 30-2 were done and showed peripheral loss in the left eye and a normal right visual field. Cirrus optical coherence tomography retinal nerve fiber layer analysis (Carl Zeiss Meditec) showed temporal thinning in the left eye only, and macula OCT was within normal limits. There was an elevated ESR of 41, but all other labs, including thyroid function tests, B12, folate and CBC, were normal.

A CT scan was obtained (Figure 2). The official reading from radiology noted “thickening of the left superior and lateral rectus muscles near the supraorbital fissure with medial displacement of the optic nerve and remodeling of the adjacent bone.” An MRI was also obtained (Figure 3), which showed “thickening and enhancement of the soft tissues adjacent to and involving the left superior rectus muscle worse at the limit of the orbital apex and extending intracranially through the superior orbital fissure with mass effect on the optic nerve, resulting in proptosis. There is also associated enlargement of the left lacrimal gland.” 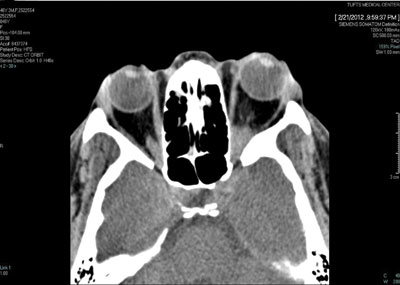 Figure 2. Orbital CT scan without contrast. Proptosis of the left eye and hyperostosis of left sphenoid wing are significant findings. 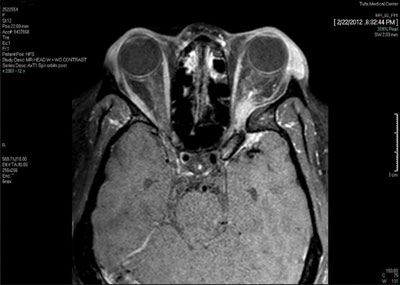 The differential diagnosis of painless progressive unilateral vision loss and proptosis includes neoplasms such as meningioma, optic nerve glioma or lymphoma, as well as vascular abnormalities such as cavernous hemangioma and inflammatory processes such as orbital pseudotumor, sarcoid and thyroid orbitopathy.

Although the radiology department favored pseudotumor due to the enhancement of the lacrimal gland and thickening of the superior and lateral rectus muscles, inflammatory pseudotumor is often painful and would not cause hyperostosis of the sphenoid wing. Lymphoma would look more infiltrative, and cavernous hemangioma has a distinctive appearance with contrast on MRI. The hyperostosis and intracranial extension with a dural tail is characteristic of sphenoid wing en plaque meningioma. Based on the radiologic appearance, neurosurgery took the patient to the operating room for a craniotomy and debulking. Pathology confirmed meningioma.

All meningiomas arise from arachnoid villi and may thus occur in any location where this tissue is located. Meningiomas primarily occur in women, with average age of onset of 50 years, and affect African Americans more than Caucasians. Meningiomas are among the most common intracranial neoplasms, with 10% to 20% of all brain tumors being meningiomas; 1% to 17% of all intracranial meningiomas are located in the sphenoid ridge, usually arising from the lesser wing. There may be a genetic predisposition linked to chromosome 22, which is also associated with acoustic neuromas. Female hormones may also play a role, with progesterone being the most likely culprit.

Like all meningiomas, sphenoid wing meningiomas are slow-growing and predominantly benign, but they can be locally aggressive and invasive, causing a variety of symptoms. Due to their location, they can invade the frontal, temporal, orbital or sphenoid spaces. Early symptoms in the sphenoid ridge often include orbital nerve compression and optic nerve atrophy, as we saw in our patient. There is almost always proptosis, which may be minimal if the meningioma is en plaque vs. en masse, so this can be missed on initial evaluation. Ocular motor nerve palsies and cranial nerve V involvement are less common. In later stages, increased intracranial pressure, seizures and mental status changes are seen. Foster Kennedy syndrome, in which ipsilateral optic atrophy, contralateral papilledema and anosmia are present, can occur if there is raised intracranial pressure with frontal invasion.

Treatment is aimed at local control. Early surgical decompression, via either frontal craniotomy or a combined orbital approach, is indicated if the vision is affected or if there is intracranial extension. However, visual acuity has not been shown to stabilize or improve with early vs. late surgical decompression. Complete surgical resection is typically not a practical goal, and this was not attainable in our patient due to invasion of the tumor near important structures. Sphenoid wing meningiomas are at a high risk for recurrence or progression, primarily due to the difficulty in obtaining complete surgical resection at this location. However, long-term stability has been proven to be achievable in most cases. External beam radiation may prevent or delay recurrence and may be recommended if subtotal resection is performed. Recurrence after subtotal resection can be as high as 90% at 15-year follow-up, so monitoring is important. Serial MRI scans are typically used to track patients; however, some studies have successfully used CT scans as a more cost-effective method for monitoring exophthalmos and recurrence, with patient outcomes being comparable to conventional screening.

Our patient had prepapillary bilateral arterial loops that on first evaluation were thought to be optociliary shunt vessels. However, the differential diagnosis for acquired optociliary shunt vessels includes central retinal vein occlusion, glaucoma, optic nerve sheath mass, idiopathic intracranial hypertension and chronic papilledema. If our patient’s abnormal vessels were associated with her meningioma or pre-existing papilledema, an asymmetric or unilateral appearance would be expected. Her retinal exam was normal, and the pre-papillary vascular abnormalities were bilateral and symmetric. These vascular abnormalities were determined to be congenital remnants of Bergmeister’s papillae, and their presence was thought to be incidental.

The patient underwent frontal craniotomy for debulking 3 weeks after her initial presentation. The surgery was uncomplicated, although the tumor could not be completely removed from her levator muscle. At her 1-month postoperative visit, her left eye vision had improved dramatically from counting fingers to 20/25, and she had mild left upper lid ptosis with residual proptosis. She will be followed with serial MRI scans to determine whether radiation therapy might be necessary in the future.