“There is no traditional hydrodissection, it uses less fluid, there is less manipulation, and [it has] potential safety advantages, which I think we’re all after,” Stephen G. Slade, MD, said at the American Society of Cataract and Refractive Surgery meeting in Chicago. “I think the goal for everybody is [to] see what it can do that we couldn’t do before with what we had.”

The new technique combines functions of the femtosecond laser with phacoemulsification to enable maneuvers that were previously impossible to perform. The reduction in cumulative dissipated energy, irrigation and number of instruments in the eye reduces postoperative complications such as corneal edema and endothelial cell loss, Slade said.

The procedure is particularly suited to patients with traumatic cataracts, low endothelial cell counts, dislocated lenses, pseudoexfoliation and weak zonules. With fewer instruments in the eye than the standard laser fragmentation method, the new technique eliminates the need to spin the nucleus manually, pre-chop the lens or tug the zonules, Slade said.

“It’s been shown already that this technology has the potential to offer an overall reduction in phaco power and endothelial loss and really make the surgery a little bit gentler,” he said.

The phaco tip is the first instrument to enter the eye during the first phase of the procedure, Slade said.

“What we’re doing with this technique is first making sure that the capsulorrhexis has been completed,” he said. “You come in with the phaco tip after you put viscoelastic in the eye and just ensure that the rhexis is free. Typically with this technology, they are free-floating, only attached to the cortex, but we’re able to just check and make sure.”

The second step of the procedure involves using the phaco tip to core out the center part of the lens nucleus, Slade said. A second instrument is used to break up the nucleus and remove the fragments.

“I like the technique because it’s so reproducible,” he said. “It seems to fit every type of nucleus that I know, except for very soft ones. After you core out the central cylinder, you can come in with the second instrument and the four quadrants break apart very nicely and you can drag them out. It’s just very elegant surgery.” 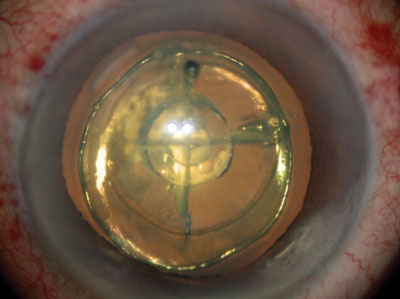 A gas bubble can be seen behind the nucleus in this post-laser, pre-phaco view. The gas dissects the nucleus and lessens the need to do any hydrodissection.

Slade reviewed a study in which 20 patients underwent the new procedure or standard femtosecond laser lens fragmentation with hydrodissection.

Slade and colleagues set out to compare the new technique with the conventional laser fragmentation technique in terms of phacoemulsification power and fluidics.

Harder nuclei were removed more effectively with the new technique.

“Cell counts were better. We had a reduction in flow for total amount of [balanced salt solution] that went through the eye. We also tracked this,” Slade said. – by Matt Hasson