Careful attention is needed to avoid intraoperative and postoperative problems.

Glued intrascleral haptic fixation of a posterior chamber IOL is a technique aimed at restoring pseudophakia in complicated cases in which the posterior capsule is either deficient or inadequate to support an IOL. Complications are an inherent part of any surgery, and knowledge is essential so that they can be avoided with this technique.

Intraoperatively, it is important to keep a close eye on all the proceedings of the surgery because a slight distraction can prove to be hazardous. Complications occur, but they can also be anticipated at times and dealt with accordingly.

Partial scleral thickness flaps are fashioned approximately 2.5 mm by 2.5 mm in size and are exactly 180° opposite each other. A scleral marker is stained with a dye and used to mark the site for the creation of the flaps. Variation in the fashioning of the scleral flap can lead to unfavorable outcomes such as eccentric flaps, perforation, irregular flap sizes and inadequate flap adherence after surgery. 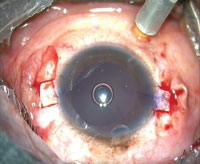 Figure 1. The scleral flaps should be 180° apart. These flaps are about 160° apart, which will lead to a decentered IOL.

When the scleral marking is not appropriate, eccentric flaps occur (Figure 1). Surgery should not proceed with such flaps, as sclerotomy is to be done beneath these flaps and a path created for the externalization of the haptics. This eventually leads to decentration of the IOL. A fresh flap should be created diagonally opposite to the previous one, and then only should the surgery be continued to the next level.

Perforation at the site of the scleral flap creation can occur when the surgeon fails to create a partial-thickness scleral flap and instead goes too deep. In such cases, the scleral flap should be sutured back to its bed and fresh flaps created at a different site after scleral marking.

Inadequate flap adherence after surgery usually occurs if the glue is not properly applied beneath the flap or if the flap is not pressed properly after the application of the glue. During the process of glue application, the scleral bed should be completely dry and the infusion should be either stopped or removed. If the infusion is kept on, then the glue gets washed away by the fluid leaking from the sclerotomy sites. Inadequate flap adherence can lead to hypotony, exposure of the sclerotomy wound or exposure of the haptic.

The success of glued IOL surgery depends a lot on the maintenance of infusion into the eye. At no point should viscoelastic be used to inflate the eyeball. The role of viscoelastic should be limited to the loading of the foldable IOL and protection of the endothelium. Infusion can be maintained in the eye with the help of an anterior chamber maintainer or a trocar cannula.

Sclerotomy is done with a 20-gauge needle beneath the scleral flap, approximately 1 mm to 1.5 mm from the limbus, and is obliquely guided into the mid-vitreous cavity. The needle should enter the eye behind the iris, and the tip of the needle should be seen in the mid-pupillary area. The needle is then withdrawn from the eye. Any deviation from this can lead to various complications, such as sclerotomy plane anterior to the iris, iridodialysis or hyphema.

Vitrectomy is a crucial step in this surgery, and a lot depends on how well it is done. Perhaps the most challenging aspect of removing vitreous from the anterior chamber is visualizing it. Because of the optical clarity of vitreous and its similarity to cortical fibers, a surgeon often must use indirect clues, such as peaking of the pupil, to determine the presence and extent of vitreous prolapse. Triamcinolone can be used to stain the vitreous; this ensures that no vitreous strand is present in the anterior chamber and that the pupil is totally free from vitreous.

During vitrectomy, iris chewing can occur if the surgeon is too fast or not cautious enough. Entrapment of the iris can also occur during the withdrawal of the vitrectomy cutter if it is not switched off. This leads to an irregular shape of the pupil postoperatively.

IOL drop is usually encountered in the early stages of a surgeon’s learning curve. Because there is no posterior capsule available for support, any error on the part of the surgeon during the handling of the IOL can lead to an IOL drop.

The unfolding of the IOL should always be gradual and slow. Abrupt unfolding leads to jerky movement, and the surgeon at times misses catching the tip of the leading haptic. A foldable IOL with a “pushing” mechanism should be preferred rather than the “screwing” mechanism. This gives better control over unfolding.

Improper handling of the haptics by a surgeon or an assistant can cause the haptic to slip back in to the eye and eventually cause an IOL drop.

The serrations of the glued IOL forceps are sometimes lost due to continuous reuse and sterilization. This decreases the grip on the haptic, which might cause it to slip back into the anterior chamber and, if not managed properly, can lead to IOL haptic breakage or IOL drop.

The haptics of the IOL break when undue pressure is exerted on them or while trying to hold the haptics not from the tip but somewhere midway along the length of the haptic during the process of externalization. This causes kinking of the haptic, and when an attempt is made to straighten, it breaks (Figures 2 and 3). 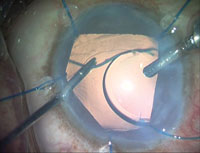 Figure 2. IOL haptic deformed due to the glued IOL forceps. 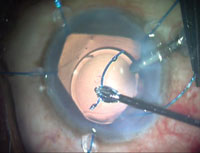 Decentration of the IOL can be encountered under certain conditions, including eccentric scleral flaps and improper tucking of the haptic. IOL tilt can occur if the IOL is not well centered.

A slight element of vitritis occurs with this surgery because these eyes are compromised and they have vitreous protruding into the anterior chamber. A thorough vitrectomy is advised for all these cases.

A surgeon usually comes across hypotony or choroidal detachment in cases of improper closure of the wound, large-gauge sclerotomy entry, or failure to inject air into the eye after the surgery. Once the speculum is removed at the end of surgery, the surgeon should check if there is hypotony and if present inject fluid into the eye through the clear corneal incision. The fluid will go into the vitreous cavity and distend it.

IOP may be elevated postoperatively because of any residual viscoelastic or postoperative inflammation, causing secondary glaucoma.

Cystoid macular edema occurs when there is lot of disturbance created by mishandling and mismanagement of the vitreous, which occurs mostly during vitrectomy or exteriorization of the haptics.

Improper management of the vitreous and traction on the vitreous strands can lead to retinal detachment in the postoperative period. Care should be taken in all cases in which this technique is combined with posterior segment surgery requiring pars plana vitrectomy.

Endophthalmitis is a complication that is universal and can happen in any intraocular surgery if the sterilization process is not followed stringently.

IOL subluxation could occur. This is basically due to a mistake during surgery. The surgeon should tuck the haptics well and glue them in. If the white-to-white area is too large — for example, 12 mm in the horizontal axis — then the surgeon should do a vertical glued IOL and create the flaps at the 12 and 6 o’clock positions. This way, there will be more haptic externalized to tuck and glue because the vertical cornea is shorter than the horizontal. If the surgery is done well and a good amount of haptic is tucked and glued, the IOL will not subluxate. In a vertical glued IOL, the surgeon sits temporally like one does temporal phaco. 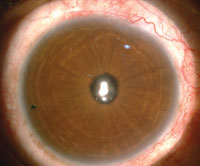 If the surgeon has not tucked the haptic well into the sclera, haptic extrusion can occur. In such cases, the surgeon should return to the operating theater, create a fresh tunnel, and re-tuck and re-glue the haptic.

As with any surgery, glued IOL surgery has its own complications, and the surgeon should be careful in handling them. The surgery, if done well, can give excellent results (Figure 4).