However, precise mechanism for extremely rare U.S. disorder has yet to be determined.

LAKE ARROWHEAD, Calif. — Despite being an ocular disease that should be easy to diagnose and treat effectively in about 80% of typical cases, professionals in various disciplines from around the world gathered here for the Vogt-Koyanagi-Harada (VKH) Syndrome: First International Workshop. The goal of the research workshop was to begin dialogue on a worldwide consensus for diagnostic criteria and treatment.

“VKH is usually severe panuveitis with an acute onset,” said Janet L. Davis, MD, an associate professor of ophthalmology at the Bascom Palmer Eye Institute in Miami. The disease “affects both eyes and can be seen in any age group.” Patients often present with exudative retinal detachments. “There is often a drastic and rapid reduction of vision in both eyes, down to the level of counting fingers,” Dr. Davis said. However, patients may have a premonition of the disease with some anterior segment inflammatory signs, headache, pain and light sensitivity. “But often within a week or two, the vision will decrease dramatically because of inflammation in the posterior segment,” she said. 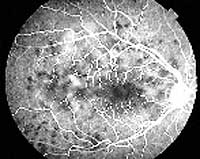 --- Fundus of right eye of patient with acute VKH syndrome revealing exudative detachment of the retina involving the fovea.

VKH syndrome, which is named after one German and two Japanese researchers who published independently early in the 20th century, has an “interesting genetic predisposition — a human leukocyte antigen [HLA] association,” Dr. Davis said. The HLA type that is associated with VKH is “very common in Asians, and similarly the disease of VKH is very common among Asians,” Dr. Davis said. In the United States, VKH is found “in people who are mainly darkly pigmented or who have Native American Indian ancestry. There is a genetic bridge between Asia and the Native American Indian related to the migration of peoples across the Bering Strait.” VKH also is seen in Hispanics and African Americans living in the United States.

Russell W. Read, MD, a fellow in uveitis and ophthalmic pathology at the Doheny Eye Institute in Los Angeles, served as program secretary for the workshop. “Over the past 2.5 years, we have seen over 700 cases of uveitis at Doheny,” Dr. Read said. Of that number, slightly over 5% were diagnosed as VKH. However, that percentage is greater than in most areas of the United States because of Southern California’s large Latino population. At least one U.S. study showed an incidence rate slightly lower than 1% of patients presenting with uveitis.

Dr. Read is hopeful that current diagnostic guidelines can be revised to account for both the acute onset and chronic stage of the disease. “It will probably be based on a breakdown of the different organ systems involved,” he said. “VKH doesn’t just affect the eye. It also affects the central nervous system [CNS], the inner ear and the cutaneous system.”

Nonetheless, Howard H. Tessler, MD, a professor of ophthalmology at the University of Illinois in Chicago, said that in most cases VKH is not a difficult disease to diagnose. “There is usually an appearance that is pretty characteristic in most patients,” he said. The disease “usually begins acutely with a severe headache and stiffness of the neck. Patients can have neurological symptoms, specifically meningitis-type symptoms.” Patients also frequently develop auditory symptoms early on, such as tinnitus and decreased hearing. 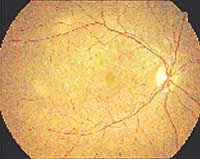 --- Fluorescein angiogram of same patient showing typical findings of multiple hyperfluorescent spots with pooling of fluorescein in the subretinal space.

Dr. Tessler said that it is important that VKH be accurately diagnosed early on. “If not, the disease can become very severe and require a tremendous amount of medicine,” he said. Fluorescein angiography is one of the laboratory investigations that should be routinely conducted in clinically suspected cases of VKH syndrome. “The fluorescein angiogram has a characteristic picture of multiple subretinal leakage areas that tend to enlarge over time,” Dr. Tessler said.

Gary N. Holland, MD, who is chief of the cornea, external ocular disease and uveitis division at the Jules Stein Eye Institute in Los Angeles, was workshop coordinator. VKH syndrome “can be treated very successfully if it is treated appropriately,” Dr. Holland said. “It really depends on the clinician having a good understanding of the course of the disease.”

Dr. Holland, who also is director of the Inflammatory Disease Center at the Jules Stein Eye Institute, said that treatment can be divided into two phases. “The first phase is the treatment of the initial severe posterior uveitis at the onset of the disease, which is characterized by an exudative retinal detachment,” he said. “This is usually managed very successfully with high-dose systemic corticosteroids.” Occasionally, though, patients will require a treatment other than oral corticosteroids because of their intolerance to steroids. “Immunosuppressive drugs are sometimes used. Cyclosporine is one alternative at onset,” Dr. Holland said. “Another alternative is cyclophosphamide.”

A number of patients, though, progress to a chronic phase, “in which they have an anterior uveitis that is less responsive to corticosteroids,” Dr. Holland said. “Many of those patients require immunosuppressive therapy to control the anterior component of the disease. For persistent anterior uveitis, azathioprine and methotrexate can be very effective treatments.”

In any event, Dr. Holland does not recommend observation without any drug therapy. “Without intervention, patients will definitely get worse,” he said. “I believe there is general agreement on the approach to treatment, if not the specific drugs. Very aggressive treatment at the onset is required. This is the best way to prevent complications and preserve vision.” Still, “one subject of discussion that requires further investigation is the duration of initial treatment. Some clinicians feel that continued treatment for as long as 6 months will improve the patient’s prognosis.”

Regarding potential adverse events with therapy, “clinicians always have to be concerned about the side effects of treatment, especially chronic oral corticosteroids,” Dr. Holland said. In addition, VKH syndrome “can be complicated by the development of posterior synechiae, cataracts, secondary glaucoma and subretinal neovascular membranes.”

In Japan, patients with VKH are often treated with early, high-dose intravenous steroids. “Patients are hospitalized from 3 to 7 days,” said Ronald E. Smith, MD, professor and chairman of the department of ophthalmology at the Doheny Eye Institute and the University of Southern California School of Medicine in Los Angeles. “But we find here in the United States that most patients do pretty well taking systemic steroids.” Added Dr. Read, “whether intravenous versus oral steroids makes a difference in long-term outcomes of the disease is unknown.”

Dr. Smith said the medical community has yet to determine the precise mechanism that triggers VKH syndrome. “Some people believe it’s some type of autoimmune reaction to the pigment molecules in the eye,” he said. “There also is still a lingering suspicion that it might be a virus of some sort.” Once an accurate mechanism has been determined, “then a more directed and specific therapy can be developed. I believe that will probably occur. We’re still using a broad-based approach to treatment of this entity.”

Dr. Smith himself speculated that VKH syndrome “is some type of localized autoimmune reaction to some part of the retina or the choroid. This could be triggered by a virus. There also is some evidence that genetic susceptibility could be involved.” In essence, “I believe it will probably end up being a combination of an organism or a protein from an organism occurring in a genetically susceptible individual.”

In any event, “for uveitis in general, we need more directed therapies,” Dr. Read said. “We’re treating the eye with a pill that affects the entire body. This is less than an ideal situation. We would certainly much prefer to have targeted therapy — either regionally administered, such as a drop, or an injection around the eye or in the eye, or systemically administered that is regionally targeted to the eye.”