MILAN, Italy — Phacoemulsification of all types of cataract can be performed through a 1.06-mm incision because of the innovative features of the Optikon 2000 (Rome) Pulsar Minimal Stress system, according to a surgeon who uses the machine.

“Having tried it, I realized that phacoemulsification can really be performed with minimal stress to the zonules, to the en tire chamber and to the surgeon, as well,” said Giuseppe Panzardi, MD, of Florence University Eye Clinic, at the Videocataract meeting here in Milan. 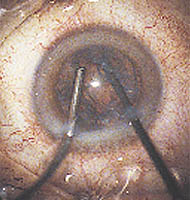 ---The Teflon coated, sleeveless phaco tip is used in conjunction with a separate infusion cannula.

The basic innovation is in the small diameter (0.68 mm) of the phaco tip, which needs only a very small incision. The tip is coated with a thin layer of Teflon, which is a self-lubricating material, and has no sleeve. Infusion is conveyed through a separate cannula.

“The first time I used this technique, I was rather afraid of burning the incision,” Dr. Panzardi said, “but I realized that the incision outflow, the low phaco power and the Teflon coating were more than sufficient to protect the tissues.

“A sleeveless tip also is very manageable,” he added, “and offers many unexpected possibilities of ample movement in the anterior chamber.”

The advantages of a small incision are well known, Dr. Panzardi said. “We are performing the entire operation in a completely closed chamber and, therefore, in very safe conditions,” he said. “It’s a pity that, eventually, we have to enlarge the incision to insert the IOL.”

Another important feature of the Pulsar Minimal Stress phaco tip is that the amount of elongation of the tip, which is preset by the surgeon at the beginning of the procedure, is maintained unaltered, independent of the resistance the tip encounters during phacoemulsification maneuvers.

“Being long and thin, this tip cuts easily and precisely,” Dr. Panzardi said. “Furthermore, it is not pushed back by the resistance of the nucleus, thus avoiding the dangerous reaction of pushing the nucleus forward by the surgeon, which may cause capsular rupture or zonular stretching. For the same reason, the cutting maneuvers require less phaco power.”

The Optikon system requires some modification of traditional phacoemulsification techniques, Dr. Panzardi said. He performs two 1-mm corneal incisions near the limbus at the 10:30 and 1:30 clock positions.

Due to the small dimensions of the incision, traditional forceps cannot be used for the capsulorrhexis, which has to be performed with a cystotome or with coaxial vitreous-type forceps.

Some problems also arise with the use of viscoelastics. “In these conditions,” Dr. Panzardi said, “the viscoelastic creates a perfect, very stable chamber, which is ideal for the capsulorrhexis. On the other hand, when infusion starts, the outflow of the substance is hindered by the small incision. The chamber becomes clogged up, and hydrodissection is almost impossible, unless the viscoelastic is forced out mechanically.”

Dr. Panzardi said he prefers not to use the viscoelastic at this stage. He inserts an infusion cannula in the left port and leaves it there for the duration of surgery. A constant chamber depth is ensured by saline infusion.

He then inserts slightly modified vitreous forceps into the right port and performs the rhexis under infusion.

“The maneuver is much easier than one might think. The flap tends to flutter, but is always well separated from the cortex and can be easily controlled by moving the outflow from the cannula. Hydrodissection is easy and is performed under infusion at all times.”

The phaco tip is then embedded in the nucleus. “It is so long, thin, manageable and sharp that you feel you could engrave your initials on the nucleus,” Dr. Panzardi said. “The ultrasound power is maintained around 30% to 40% maximum. The nucleus is never pushed, and all chopping maneuvers are performed with minimal stress to the zonules.”

On the other hand, the small diameter of the phaco tip requires a slightly higher vacuum and aspiration flow rate.

“I set the vacuum at 45 mm Hg and aspiration flow around 30 cc/min, which is only slightly higher than with other phacos,” he explained.

The irrigation cannula, which is held in the left hand, helps the surgeon during phacoemulsification maneuvers. The jet from the cannula directs the nucleus fragments toward the tip for aspiration.

“With traditional phacoemulsification, it often happens that the infusion coming out of the sleeve diverts the fragments from the tip. On the contrary, with this system, the aspiration of the epinucleus also is made easier,” Dr. Panzardi said.

The phaco tip is then replaced by the aspiration cannula for aspiration of the cortex.

“Much to my regret, I have to enlarge the incision to insert the IOL,” Dr. Panzardi said. “However, I have carried out my surgery within the highest safety standards: closed chamber, low ultrasound power, optimal tip maneuverability. The industries will still have to work at producing modified surgical instruments suitable for the requirements of the technique. And, of course, we are waiting for an IOL that can enter a 1-mm incision. The surgeons are ready!” he concluded.