Study of patients suffering from retinal angiomatosis in von Hippel-Lindau disease has shown that laser treatment has had a permanent and positive effect.

FREIBURG, Germany - A recent long-term trial attempted to diagnose and treat capillary angiomas early in the asymptomatic stage. In particular, the trial looked at patients suffering from von Hippel-Lindau (VHL) disease where retinal detachment often is a threat if the retinal angiomas are left untreated.

Since 1983, Dieter Schmidt, MD, and colleagues have been investigating patients with key lesions and those what are at risk for VHL in a multidisciplinary study. His results were published in the European Journal of Medical Research.

In the study, classical retinal angiomas and microangiomas were treated with an Argon laser, and checks were performed as late as 15 years to provide long-term results.

Of the 69 patients in the study, 20 were originally investigated by an ophthalmologist because of impairment of vision. The other 49 patients had asymptomatic angiomas, which were found incidentally following a referral to an ophthalmologist because of a key lesion of VHL or as a result of screening patients registered as having VHL. In all, 189 angiomas in 97 eyes were identified.

Patients with retinal angiomas were extensively tested for lesions due to VHL, and, if found, first degree relatives were also investigated. For ethical reasons, Dr. Schmidt did not establish a control group because withholding treatment would have been dangerous.

He classified the angiomas into three types. Classical angiomas were defined as prominent, well-defined pink-to-red tumors with at least one pair of tortuous dilated feeder vessels. A microangioma is defined as a tiny red lesion with very small feeder vessels. Its size is less than or equal to the diameter of the large retinal vessels. Fibrotic angiomas are defined as white or gray and do not show dilation of the feeder vessels. 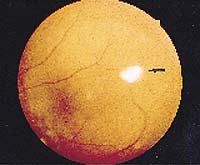 ---Fibrotic angioma of a patient with v. Hippel-Lindau disease: the feeder vessels are not enlarged!

The patients were treated for angiomas and microangiomas by laser, unless they were localized close to the optic disc, the macula or a major blood vessel adjacent to the macula. Fibrotic angiomas were not treated.

Dr. Schmidt's study used a Visulas Argon green coagulator (Zeiss, Oberkochem, Germany). Photocoagulation lasted for 0.1 to 0.2 seconds at an average power of 0.2 to 0.8 watts with a spot size of 300 or 600 µm.

Spot size, duration and power all varied depending on the size, location and severity of the tumors. For angiomas with superficial white membranes covering the tumor, the power was increased to 1.5 watts.

Some angiomas required several sessions to completely destroy the tumor, while microangiomas often required only one session. For angiomas bigger than the diameter of the papilla, the results showed that several sessions were necessary.

In the hope of preventing retinal detachment when faced with large angiomas, the procedure was begun with circular photocoagulation of the adjacent retina.

The feeder vessels were not coagulated in Dr. Schmidt's patients for two reasons: the possible recurrence of the angioma and the danger of vitreous hemorrhages.

A total of 53 classical and 55 microangiomas were destroyed by photocoagulation without any permanent side effects.

Dr. Schmidt said that the laser treatment in all patients with asymptomatic angiomas was successful.

"We preferred the laser treatment to other procedures because it preserves the adjacent retina. With laser treatment, a more carefully directed destruction of the angioma is possible under direct observation of the lesion," Dr. Schmidt wrote about his study.

Fibrotic angiomas of the retina have occurred infrequently in most of Dr. Schmidt's observation. He said he thought that they are the final stage of scar formation and, therefore, did not treat them. He followed two cases in particular that showed no signs of expanding fibrotic angiomas even after more than 10 years of untreated follow-up. 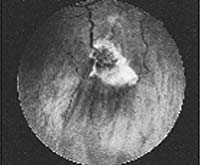 ---Scar formation after treatment of a classical angiom with laser in a patient with v. Hippel-Lindau disease (VHL).

Dr. Schmidt's study also reported on angiomas that occurred very close to the macula, optic disk and nearby regions. Looking at the results of other studies, he found that laser coagulation on or close to the optic disc had been disappointing.

The optic disc results showed in some patients a relentless progression of the tumor or penetration into the optic disc nerve fiber layer and papillo-macular bundle, with subsequent visual loss in spite of treatment.

In Dr. Schmidt's study, he looked at 25 untreated asymptomatic microangiomas and was "astonished" to find that those lesions produced no complications and showed no significant growth within a mean follow-up period of 4.3 years. The lesions were found in patients between the ages of 11 and 45 years old.

In terms of relapses in all patients, the study showed they only occurred in five patients with coagulated angiomas. When re-evaluating the results, Dr. Schmidt found that primary coagulations caused scarring in all patients. It also showed that the growth of relapsing angiomas seemed to be slow, because they were all microangiomas. Permanent visual impairment did not occur.

In nine patients, newly developed microangiomas were detected. Because they were microangiomas, they did not decrease visual acuity. Dr. Schmidt recommended treating microangiomas in particularly risky areas of the retina.

He also recommended planning follow-up visits accordingly. On average, relapsing or new angiomas occurred at 4.2 years, but one patient showed signs of new angiomas as early as 1.5 years.

Because of the hereditary nature of VHL-associated retinal angiomatosis, visual impairment occurs early in life. The risk of retinal angioma before the age of 5 or 10 is less than 1% and 5%, respectively.

The mean age of the patients in the study was 31.1 years, but the actual age may have been considerably younger, according to Dr. Schmidt, because the progression of the disease does not cause pain.

As a result of his study, Dr. Schmidt concluded that young patients who are thought to be in danger of developing a retinal angioma in the near future should be investigated at least twice a year. Patients older than 30 years of age can be checked at 1-year intervals and after 3 years at 3-year intervals. Should new angiomas occur or old ones reoccur, then follow-up should proceed along a shorter time-line.

To make sure patients with retinal angiomatosis are properly identified, Dr. Schmidt suggested ophthalmological examination and the identification of patients with VHL be done as early in life as possible. He concluded that early stage discovery of the disease can result in a safe and effective treatment, even if long-term follow-up is necessary.

For Your Information: Reference: