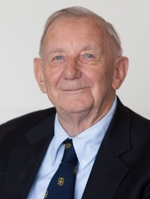 Christopher R. Blagg, MD, FRCP, who was integral in standardizing outpatient dialysis care in the 1960s, died on March 31. He was 91 years old.

Blagg earned his medical degree from the University of Leeds School of Medicine in England. He moved to Seattle in 1963 to work with Belding Scribner, MD, a nephrologist and the first division head of nephrology at the University of Washington. Scribner pioneered development of a shunt to provide access to a patient’s blood during long-term dialysis treatments.

In 1962, Blagg oversaw the establishment of a network of community-based dialysis facilities in Seattle’s King County. Named the Seattle Artificial Kidney Center, it was the first outpatient dialysis organization in the United States.

Blagg recalled the challenges he and Scribner faced in setting up the kidney center in a 2007 article published in the American Journal of Kidney Diseases.

“In 1961 ... Scribner asked University of Washington Hospital administration about starting more patients. They refused, concerned that if his NIH funding ever dried up, the state of Washington would have no choice but to continue to support the patients. Scribner then approached James Haviland, president of the King County Medical Society, to enlist community support.

Even with the center now open, limited funds and space limitations meant not every patient who needed dialysis could receive treatment. As a result, the kidney center established an admissions and policy committee to review and select patients. The panel and its members, drawn from the local community, was later featured in a Life magazine cover story and an NBC-TV documentary entitled “Who shall live?” according to the American Journal of Kidney Diseases article.

To qualify for the limited treatments, Blagg wrote that candidates “had to be stable, emotionally mature, uremic adults under the age of 45 [years], without long-standing hypertension and vascular complications, willing to cooperate with the dialysis regimen and the low protein/low sodium dietary regimen, and with stable or slowly deteriorating renal function.”

During the first 13 months of operation of the kidney center, 30 patients applied to the center for dialysis treatments. Seventeen were determined to be medically acceptable. “Ten of those were accepted for dialysis, the remaining seven died,” Blagg wrote in the article.

The Seattle Artificial Kidney Center was renamed Northwest Kidney Centers (NKC), and Blagg served as executive director there for 27 years until 1998.

“I worked with Chris for at least 20 years at NKC,” Katy Wilkens, RD, MS, a retired manager of nutrition and fitness services at NKC, wrote on a memorial page for Blagg on the Northwest Kidney Centers website. “ ... When we wanted to start CKD classes to educate people about their diets so they could postpone or delay dialysis, Chris was our champion. When we needed money to run the program, he figured out where to get it.

“Chris always had some visiting nephrologist with him, and he would make sure they spent a day or 2 with the dietitians. ‘The diet is as important as the machine,’ he would say to them.

“ ... He took a personal interest in [patients’] care, and it showed,” Wilkens wrote.