Research to develop successful vaccines to help slow the spread of SARS-CoV-2 has taken place very publicly and at a historically fast pace.

The world watched the science happening live, and then it watched the vaccine rollout, first in high-risk populations all the way through to healthy adults and adolescents.

More recently, as the delta variant caused a surge in cases and threatened the safety of children returning to school, researchers have labored to finish pediatric COVID-19 vaccine trials and companies have readied regulatory submissions to get their vaccines authorized for kids aged younger than 12 years.

According to C. Buddy Creech, MD, MPH, Edie Carell Johnson Chair and professor of pediatrics at Vanderbilt University School of Medicine and director of the school’s Vaccine Research Program, trials of pediatric COVID-19 vaccines have proceeded much like other vaccine projects involving children, although there has been some debate about whether they could have moved even faster, especially given the speed with which vaccines were authorized and eventually approved in adults.

“There are certainly a few checkpoints we go through before we enroll children,” Creech told Healio, noting that one of the reasons the development of pediatric vaccines moved slower is because the risk to children early in the pandemic “was exceedingly low.”

“Kids are not merely little adults,” Creech said. “Therefore, a lot of work has been focused on tweaking the dose so that we give children only the smallest dose they need to make a robust and lasting immune response.”

Dosing and side effects

According to Creech, nearly every vaccine is evaluated in adults first, specifically during phase 1 clinical trials. He explained that this is partly because of the need to develop standardized dosing and study side effects.

“For instance,” he said, “muscle aches are easily assessed in a 30-year-old. It’s much harder to know that the muscles ache in a 30-month-old.”

Despite this, there are vaccines that have been developed primarily for children once phase 1 studies were complete.

“There are other vaccines where we have worked down the age ladder,” said William Schaffner, MD, professor of preventive medicine and infectious diseases at Vanderbilt University Medical Center and an Infectious Disease News Editorial Board Member.

One such example is the rotavirus vaccine, which is best given early in life to avoid any overly robust immune response in the gut. Paul A. Offit, MD, director of the Vaccine Education Center at The Children's Hospital of Philadelphia and a co-inventor of one of two rotavirus vaccines licensed for use in the United States, explained that, although rotavirus primarily affects infants, vaccine trials still began in adults.

“We did work our way down — not for the purpose of really thinking this was going to ever be a vaccine for anybody over a year of age but for safety purposes,” Offit said.

Fully enrolling vaccine trials for children comes with its own set of unique challenges, according to Yvonne Maldonado, MD, a professor and chief of pediatric infectious diseases at Stanford University School of Medicine.

“Pediatric trials involve the whole family in some cases, especially parents who need to monitor their children’s reactions to the vaccines,” she said. “Likely, more time is spent in recruiting and explaining these trials to parents than would be done for adults.”

“We sometimes have to disrupt vaccine schedules temporarily so that we don’t blame a fever on vaccine A when it was really due to vaccine B,” Creech said.

History also has played a role in the slower speed of pediatric vaccine research, Schaffner said, noting one notorious lesson that has continued to influence vaccinologists: the failure of a formalin-inactivated respiratory syncytial virus vaccine candidate in the 1960s.

“They did a trial in which they administered the killed RSV vaccine to some children, while others got placebo — standard operating procedure done rigorously by excellent people,” Schaffner said. “Everybody anticipated it going well, but just the opposite happened.”

Some children who received the vaccine were at increased risk for severe disease, and two children died.

“That is absolutely on the minds of everyone who works in vaccines,” he said. “That was a lesson painfully learned.”

The development of COVID-19 vaccines unfolded in a similar fashion as other vaccine projects, with adults being enrolled before children, according to Creech, a principal investigator for Moderna’s KidCOVE study, which is testing the safety and effectiveness of the company’s messenger RNA vaccine in children.

He said two things stood out as driving forces behind the delay in enrolling children — a higher burden of diseases in older adults and people with underlying medical conditions compared with children, and the history of vaccine studies almost always beginning with adults.

However, as countries began to open back up and schools made plans to return to in-person learning while the delta variant surged, some wondered if pediatric trials should have begun sooner, according to Creech.

“This is debated frequently,” he said. “In fact, some colleagues and I wrote an editorial with a title asking if adults are at warp speed, ‘Why are children stuck in neutral?’”

In the editorial, Creech and colleagues assessed the potential direct and indirect benefits of vaccinating children. The benefits included fewer hospitalizations and deaths among children, allowing children to return to school, and potential protection in adulthood, as is seen with other childhood vaccines.

According to Creech, concerns over children being “stuck in neutral” as Operation Warp Speed — as the federally funded COVID-19 vaccine project was once known — accelerated efforts to develop a safe and effective vaccine for adults prompted the team to write pediatric vaccine trial protocols very early in the pandemic so they would be ready once vaccines were deemed safe and effective.

“The biggest risk is that we leave an immunity gap among those who are not yet able to be vaccinated,” Creech said. “Prior to delta, this seemed to be OK, but now that we have delta affecting children more frequently — though it does not seem to appear to be more severe on the whole — it highlights the need to work as quickly as we can in the clinical trials that are ongoing.”

“If the world were simple, of course the answer would be that the pediatric vaccine trials of COVID-19 vaccines should have begun earlier, but the world is finite,” Schaffner said.

Even with a delayed start, according to two Pfizer representatives, the company anticipates that the FDA could issue an emergency use authorization (EUA) for its vaccine in children aged 5 to 11 years by Halloween, with approval for children as young as 6 months also possibly happening sooner than expected. Pfizer and BioNTech have already submitted topline data on children aged 5 to 11 years to the FDA, which scheduled a meeting of its Vaccines and Related Biological Products Advisory Committee on Oct. 26 in anticipation of receiving the companies’ formal request for an EUA for this age group.

One of the changes that came from Pfizer’s pediatric trials involves the dosing. The proposed regimen for children aged 5 to 11 years is two shots given 21 days apart — the same as in older age groups — but the doses are smaller: two 10 µg shots rather than two 30 µg shots.

Maldonado said the pediatric vaccine trials were handled as they should have been and, historically speaking, they have moved along much faster compared with the development of other vaccines.

“I believe that the vaccine trials in general and the pediatric vaccine trials specifically were conducted in an excellent and expedited fashion, while not sacrificing monitoring for safety and appropriate efficacy outcomes,” she said. “Remember that this pandemic started just over 18 months ago, and we have full approval for one vaccine for people aged 16 and older, emergency use authorization for children 12 to 15 and hope to have an EUA for 5- to 11-year-olds before the end of the year — only 2 years since the SARS-CoV-2 virus was identified.”

Moderna announced in May that its vaccine was safe and effective in a phase 2/3 study among adolescents aged 12 to 17 years, then submitted the data in June to the FDA, which still has not ruled on an EUA in this age group.

According to Creech, trials are ongoing in children aged younger than 12 years, with modifications similar to Pfizer’s being evaluated — moving the dose lower in order to give only the smallest amount of vaccine needed to match the immune responses seen in teenagers and adults.

Offit noted how many people in the U.S. are fully vaccinated — more than 185 million — and what has been learned from such a large cohort.

“We learned about some of the serious side effects, including myocarditis, which happens primarily in a younger person and primarily after the second dose. We learned a lot about what the natural course of the vaccine is, so now we’re working our way down,” Offit said.

“You can assume that a 50-year-old is going to be very similar to an 18-year-old, and you can, frankly, assume that the 18-year-olds will be pretty similar to the 12- to 13-year-olds,” he said. “When we get down to the 5-year-olds, you can’t make those assumptions. I believe you have to do more careful ranging studies.”

A COVID-19 “infodemic” — as WHO began referring to it early last year — has persisted since the early days of the pandemic, despite experts such as National Institutes of Allergy and Infectious Diseases Director Anthony S. Fauci, MD, appearing frequently on TV to respond to people’s concerns about vaccines.

A study published in July in MMWR reported that around half of adolescents and their parents either did not intend for the adolescent to receive a COVID-19 vaccine or were uncertain about it.

“The challenge right now is that not all of the sources of information that are available to people are trustworthy,” Creech said. “There is so much misinformation and disinformation about vaccines that are readily available.”

Because of this, Schaffner said there are essentially two Americas today: those who watch the pandemic and the science very carefully and ask incisive, thoughtful questions, keeping them up to date on the latest accurate information, and those who “think that Bill Gates is putting something in the vaccine so that they can track you.”

“It is always important to engage the public in understanding the risks and benefits of any medical interventions to ensure their confidence in them and in our public health institutions,” Maldonado said.

Regardless, Offit said the goal is just to get a vaccine for children, especially given the highly transmissible nature of SARS-CoV-2.

“We’re heading into winter, and this is a winter virus. It’s spread more easily in cooler, drier climates,” Offit said. “It’s just a bad combination of events. Hopefully, we can get a vaccine for children soon.” 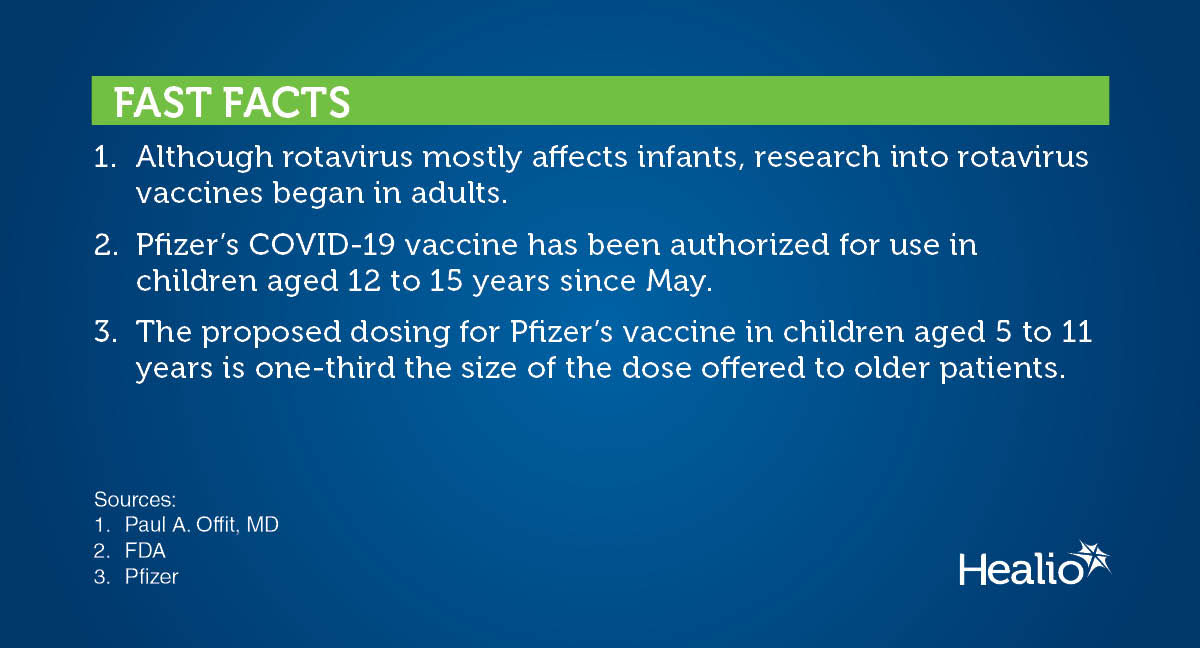