An Apache tribal community in the southwestern United States was found to have a disproportionately high burden of invasive MRSA compared with the general population of the country, suggesting that interventions are “urgently” needed to decrease S. aureus morbidity and mortality in indigenous communities, according to a study in Open Forum Infectious Diseases.

“While the specific rates of disease will vary across tribal communities, we consistently find that indigenous communities in the United States and around the world have higher rates of invasive S. aureus disease than their nonindigenous counterparts,” Catherine Sutcliffe, PhD ScM, of the Center for American Indian Health at Johns Hopkins Bloomberg School of Public Health, told Healio. “This underscores the need to include tribal communities when we monitor burden of disease and for interventions that specifically aim to reduce disease in these settings.”

Sutcliffe, Ryan Close, MD, MPH, of Indian Health Service’s Whiteriver Service Unit, and colleagues used active population and laboratory-based surveillance to identify 53 cases of invasive S. aureus in Native American individuals living on or around the White Mountain Apache Tribal Lands from May 2016 to April 2018. The majority of cases occurred in adults (90.6%) and individuals with one or more underlying medical condition (86.8%); the most common conditions included diabetes (49.1%) and obesity (41.5%). Slightly more than a quarter of the cases (26.4%) were classified as community-acquired infections. The majority of cases were methicillin resistant (75.5%); amputations were necessary in 7.5% of cases and 7.7% of cases died within 30 days of initial culture. 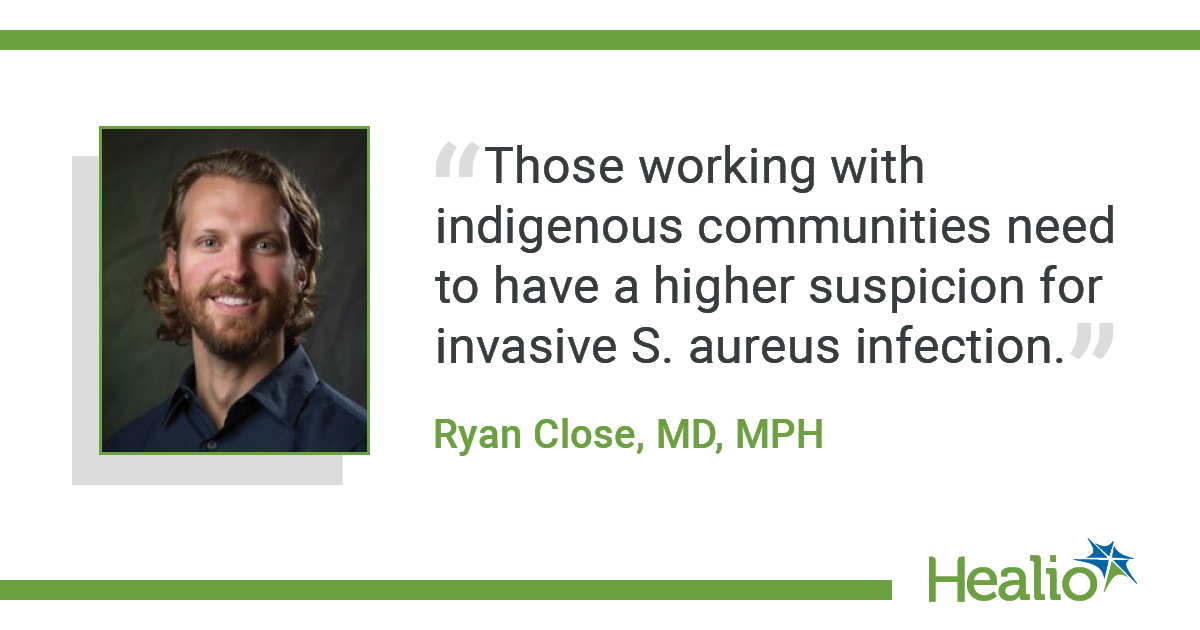 “Generally speaking, those working with indigenous communities need to have a higher suspicion for invasive S. aureus infection and invasive MRSA disease in particular,” Close told Healio. “This would likely manifest as a low threshold for empiric broad antibiotics to cover MRSA in these communities where a watchful-waiting approach might otherwise be acceptable.”

Sutcliffe noted that the researchers were surprised by “the magnitude of the disparity” in the S. aureus burden among the White Mountain community.

“The dominant role of MRSA among invasive S. aureus infections in this community has important clinical implications. Invasive MRSA infections are associated with poorer outcomes and lengthier hospitalizations and usually require intravenous antibiotics, as oral options are often cost-prohibitive,” Close said. “The potential future implications are even more concerning if MRSA’s proportional contribution increases or isolates develop additional resistance patterns, both of which stand to harm resource-limited vulnerable populations the most.” – by Eamon Dreisbach

Editor’s Note: The opinions expressed above by Close and Sutcliffe do not reflect the opinions of the Indian Health Service or the institutions with which the authors are affiliated.