The antiviral activity and safety of long-acting cabotegravir (ViiV Healthcare) and rilpivirine (Janssen Pharmaceuticals) administered every 2 months was noninferior to administration of the combination every month among adults with HIV-1 infection, according to study results from the global phase 3 ATLAS-2M study presented during CROI 2020.

Overton and colleagues demonstrated noninferiority of the 8-week regimen by comparing the percentage of study participants, which was comprised entirely of adults with HIV-1 infection who had a suppressed viral load and a virus that was not resistant to cabotegravir or rilpivirine, with plasma HIV-1 RNA levels greater than or equal to 50 copies/mL. They measured HIV-1 RNA levels using the FDA Snapshot algorithm at week 48, administering an injectable regiment of cabotegravir and rilpivirine every 2 months in 522 participants and every month in 523 participants. 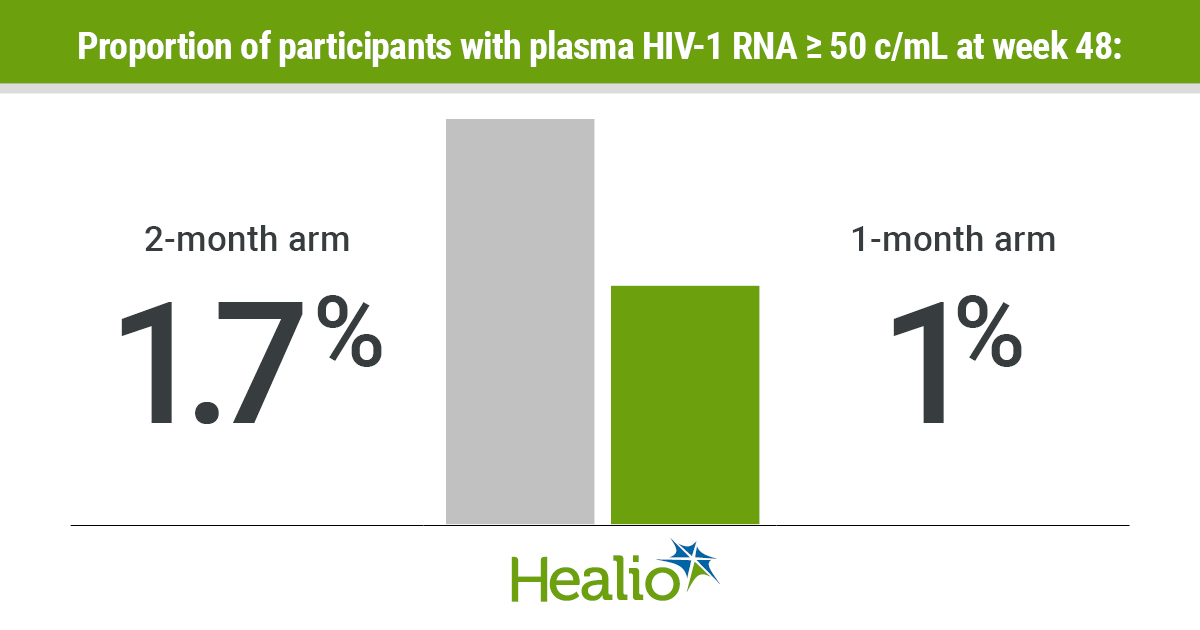 Antiviral activity and safety of long-acting cabotegravir (ViiV Healthcare) and rilpivirine (Janssen Pharmaceuticals) administered every 2 months was noninferior compared with administration every month in adults living with HIV-1.

“The long-acting regimen of cabotegravir and rilpivirine represents a significant change in the way HIV could be treated by providing people living with HIV the potential to move away from daily oral therapy,” Kimberly Smith, MD, head of research and development at ViiV Healthcare, told Healio. “The results of the ATLAS-2M study are important because they show that viral suppression can be maintained with 6 total treatment dosing days per year, instead of a daily oral treatment 365 times per year.”

Smith noted that there is not yet a specific regulatory timeline for the combination’s FDA approval.

“We and our partners are doing all we can to get long-acting cabotegravir plus rilpivirine approved and to patients as soon as possible,” Smith said. “The every-two-month administration that is supported by the findings of ATLAS-2M will be part of a future regulatory application.”

Confirmed virologic failure (CVF), characterized as successive viral loads greater than 200 copies/mL, occurred in 1.5% of patients the 2-month arm and 0.4% of patients in the monthly arm. Resistance-associated mutation to rilpivirine, cabotegravir or both agents were detected in five of the eight instances of CVF in the 2-month arm and both of the two CVF instances in the 1-month arm.

Overton emphasized that the researchers were surprised at the “overall excellent tolerability” of the therapy.

Overton noted that, while the study included a limited amount of data on transgender populations., the research is ongoing.

“The study will continue through 96 weeks with a subsequent extension phase,” he said. “These longer data will provide further support for this approach.”

In addition, the findings — which include information about patients’ preference for the long-acting regimen — “validate our efforts to bring this treatment option to people living with HIV,” Smith said. – by Eamon Dreisbach