10% of patients with candidemia have history of injection drug use

Surveillance data showed that more than 10% of candidemia cases in nine U.S. states in 2017 occurred in patients with a history of recent injection drug use, including more than 34% of cases in patients aged 19 to 44 years — an “unexpectedly high” proportion,” researchers reported.

“Our local surveillance officers started noticing that we had a higher proportion of cases with onset of infection outside the hospital and that these patients were younger than what we typically see for candidemia, and many of them had a recent history of injection drug use,” Snigdha Vallabhaneni, MD, a medical epidemiologist with the CDC, explained to Infectious Disease News. “Based on this observation and the ongoing opioid crises in the United States, we decided to take a systematic look at our data.”

Vallabhaneni and colleagues conducted an active population-based surveillance for candidemia in 45 counties in California, Colorado, Georgia, Maryland, Minnesota, New Mexico, New York, Oregon and Tennessee — a “geographically diverse” sample representing approximately 5% of the U.S. population, they said. According to the study, cases were categorized as injection drug-related if injection drug use was indicated in the medical records for up to 12 months before the date of culture.

They identified 1,191 cases of candidemia in patients aged older than age 12 years, including 128 (10.7%) in patients with injection drug use history. According to the study, this proportion was especially high in patients aged 19 to 44 years (34.6%). 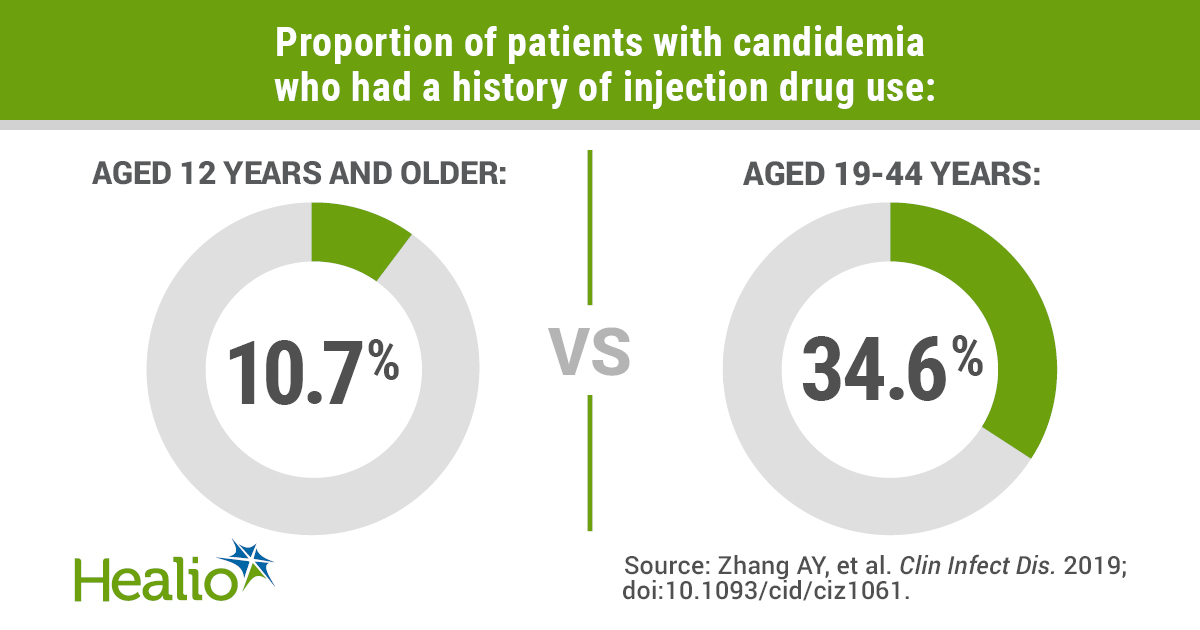 “Doctors usually think of Candida bloodstream infections as something that only affects people who have spent a long time in the intensive care unit, undergone major abdominal surgery or have cancer,” Vallabhaneni said. “Although injection drug use is a known risk factor for candidemia, we are now beginning to understand the extent to which injection drug use contributes to candidemia.”

In a related commentary, David Andes, MD, chief of the division of infectious diseases and director of the Wisconsin Antimicrobial Drug Discovery and Development Center at the University of Wisconsin, said the results “both confirm and extend our understanding of candidemia” in people who inject drugs.

He told Infectious Disease News that the findings were “a bit alarming, as we know so little about the disease in this population as far as best therapy,” and they demonstrated “yet another life-threatening complication of opioid addiction.”

“The results should serve as a sentinel for clinicians to think about this infection and its complications in young patients with candidemia,” Andes said. “Further, this should be a clarion call to the clinical research field to better define the disease state in these patients and delineate optimal prevention, diagnostic and therapeutic practices.”

Vallabhaneni summarized the message for clinicians.

“When you see a young patient with candidemia and none of the typical, well-known risk factors for candidemia, such as cancer, abdominal surgery, organ transplantation, etc., think about injection drug use as an underlying risk factor. If present, look for other infectious disease sequelae of injection drug use, such as HIV, hepatitis B and C, and bloodstream and heart valve infections with bacteria such as MRSA,” Vallabhaneni said.

“It is also important to offer treatment programs for substance use and provide harm reduction resources. Candidemia no longer only occurs in the very old patients who spent a lot of time in the intensive care unit.” – by Caitlyn Stulpin