The European Commission granted conditional approval for Ervebo, Merck’s investigational Ebola virus vaccine, which has been used widely and effectively in the ongoing Ebola outbreak in the Democratic Republic of the Congo, or DRC.

According to Merck, the commission granted the vaccine conditional marketing authorization for use in adults aged 18 years or older to protect against Ebola virus disease caused by the Zaire species of the virus, which is the cause of most Ebola outbreaks, including the ongoing DRC outbreak and the West African epidemic.

According to the European Commission — the executive arm of the European Union — “applicants may be granted a conditional marketing authorization for such medicines where the benefit of immediate availability outweighs the risk of less comprehensive data than normally required, based on the scope and criteria defined in legislation and guidelines.”

According to a preliminary estimate by WHO that was published in April, the vaccine — which Merck had been calling V920 — has been more than 97% effective in the DRC outbreak. 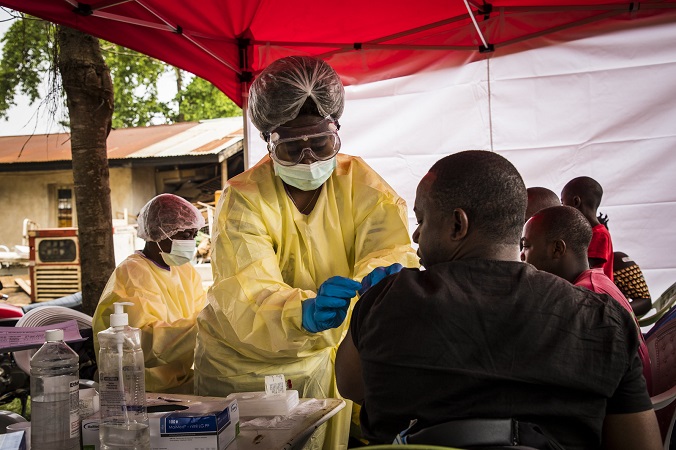 Merck’s Ebola vaccine has been more than 97% effective in the ongoing outbreak in the Democratic Republic of the Congo.
Source: World Bank/Vincent Tremeau. (This work has not been changed and is licensed under: https://creativecommons.org/licenses/by-nc-nd/2.0/.)

It is also up for FDA approval in the United States, with a decision expected by mid-March. Merck also has sought prequalification status for the vaccine from WHO. If approved, it will be the world’s first licensed Ebola vaccine.

Meanwhile, Merck said the conditional European approval will allow the company to manufacture licensed doses in Germany, “which are expected to start becoming available in the third quarter of 2020.” Around 250,000 people have already received the vaccine in the DRC outbreak, and Merck has promised to continue manufacturing doses.

Merck Chairman and CEO Kenneth C. Frazier called the European Commission’s marketing authorization “the result of an unprecedented collaboration for which the entire world should be proud.”

“It is a historic milestone and a testament to the power of science, innovation and public-private partnership,” Frazier said in a statement. “After recognizing the need and urgency for an Ebola Zaire vaccine, many came together across sectors to answer the global call for outbreak preparedness. We at Merck . . . look forward to continuing to work with the FDA and the African countries on their regulatory reviews over the coming months and with the World Health Organization on vaccine prequalification, which will help broaden access to this important vaccine for those who need it most.”