US sets another record for STDs, CDC says

Around 2.4 million cases of chlamydia, gonorrhea and syphilis were reported in the United States in 2018, marking the fifth straight record-breaking year for STDs in the country, the CDC announced today.

“STDs can come at a high cost for babies and other vulnerable populations,” Jonathan Mermin, MD, MPH, director of CDC’s National Center for HIV/AIDS, Viral Hepatitis, STD, and TB Prevention, said in a statement. “Curbing STDs will improve the overall health of the nation and prevent infertility, HIV, and infant deaths.”

Cases of primary and secondary syphilis — the most infectious stages of the disease — increased 14.4% from 30,644 in 2017 to 35,063 in 2018. Overall, there were 115,045 total cases of syphilis reported. According to the CDC report, men who have sex with men accounted for more than half (53.5%) of all reported cases of primary and secondary syphilis. 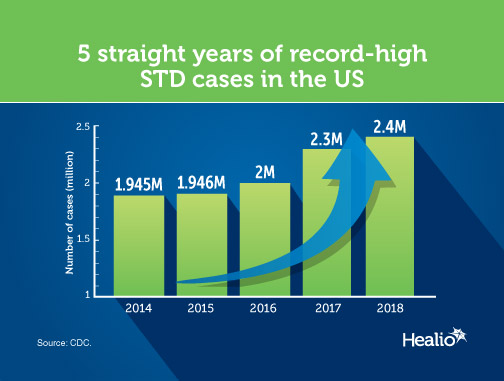 The CDC also reported a 40% increase in congenital syphilis cases, to more than 1,300 cases, which parallels increases in syphilis among women of reproductive age (36%).

“There are tools available to prevent every case of congenital syphilis,” Gail Bolan, MD, director of the CDC’s Division of STD Prevention, said in a statement. “Testing is simple and can help women to protect their babies from syphilis — a preventable disease that can have irreversible consequences.”

Gonorrhea: Resistance on the rise

According to the CDC, gonorrhea can quickly develop resistance to antibiotics. In 2018, more than half of all infections were estimated to be resistant to at least one antibiotic, although the report noted that almost all circulating strains in the U.S. are still susceptible to ceftriaxone, the primary treatment for gonorrhea.

Chlamydia was the most common condition reported to the CDC, with 1,758,668 cases in 2018 — a 2.9% increase from 2017. According to the report, nearly two-thirds of those cases were among young adults aged 15 to 24 years and the reported rate of cases in women was nearly two times the rate in men.

“We have an STD crisis in the U.S. because prevention programs were sold short for years,” David C. Harvey, executive director of the National Coalition of STD Directors, said in a statement. “Our first line of defense is underfunded and overwhelmed, leaving Americans vulnerable to STD outbreaks, and that’s exactly what we’re seeing.”

Data collected by the CDC suggest that there are several factors contributing to the overall increase in STDs, including drug use, poverty, stigma, unstable housing, decreased condom use among vulnerable groups and cuts to STD programs at the state and local levels. According to the report, the CDC and HHS are working to address the STD epidemic through the development of the Sexually Transmitted Infections Federal Action Plan. The plan will be released in 2020.

“It is my hope that in future years, we will be reporting on progress, instead of more health inequity in our society,” Bolan wrote in the report. “This is our challenge and our call to effectively respond to the information shared in this report.” – by Caitlyn Stulpin