WASHINGTON — Multidrug-resistant Salmonella was detected twice as often in samples of meat from conventionally-raised chicken and turkeys compared with antibiotic-free or organic poultry, according to findings from a study conducted in Pennsylvania.

“The intention of our study is not to say that organic poultry is better than conventional poultry,” Xin Yin, MPH, a DrPH candidate at Penn State College of Medicine, said during a news conference at IDWeek. “The reason that we conducted this study is because antibiotic-resistant Salmonella is a public health concern. The reason we looked at poultry meat is because poultry is very important in the transmission of resistant pathogens, and also the U.S. consumption of poultry is very high.” 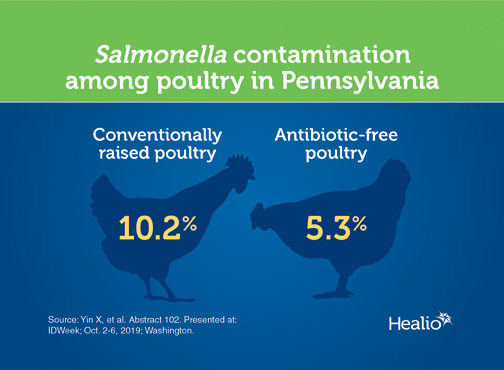 In the first study, researchers reviewed data from chicken and poultry samples randomly purchased from stores in Pennsylvania between 2008 and 2017, assessing antimicrobial susceptibility and whole genome sequencing data from 320 Salmonella strains. They reported related antibiotic use — whether the animals were conventionally raised, antibiotic-free or organic — from the packaging to compare samples.

In the second study, the researchers did not differentiate between conventionally raised or antibiotic-free animal products. They analyzed 2,520 samples of poultry, ground beef and pork chops collected between 2015 and 2017 from randomly selected stores in Pennsylvania.

Nkuchia M. M’ikanatha, DrPH, MPH, an author on both studies and an epidemiologist with the National Antimicrobial Resistance Monitoring System, and colleagues found that 3.8% of the samples contained non-typhoidal Salmonella. Of the samples that were contaminated, 29.2% were resistant to three or more classes of antibiotics and 17.7% were resistant to five or more classes of antibiotics. In 2015, resistance to ceftriaxone was 12%. In 2016 and 2017, it was 27% and 14.7%, respectively.

“What we would like the clinicians to know is that Salmonella is not just characterized by salmonellosis,” M’ikanatha said during the news conference. “It is also very important to test for the susceptibility involved and determine whether the drug that you intend to use is going to be susceptible.” – by Marley Ghizzone