4 European countries lose measles-free status; US on the brink

Amid a rise in cases, four European nations — Albania, the Czech Republic, Greece and the United Kingdom — have their lost measles elimination status, according to the European Regional Verification Commission for Measles and Rubella Elimination, or RVC.

In the United States, officials have warned that ongoing measles outbreaks in New York have placed the U.S. on the same path.

“We have a worrying trend that all regions are experiencing an increase in measles, except for the region of the Americas, which has seen a small decline,” Kate O’Brien, MDCM, MPH, FRCPC, director of WHO’s department of immunization, vaccines and biologicals, said during a news conference. “We have countries that have low vaccination coverage, and this is contributing to the outbreaks of measles, but we also are seeing countries that have very high measles vaccination coverage, and yet outbreaks are happening.”

U.K. health officials announced earlier this month that the nation’s measles elimination status had been terminated. The three additional countries announced today by WHO mark the first time there have been four elimination reversals since the RVC began its verification process in 2012. 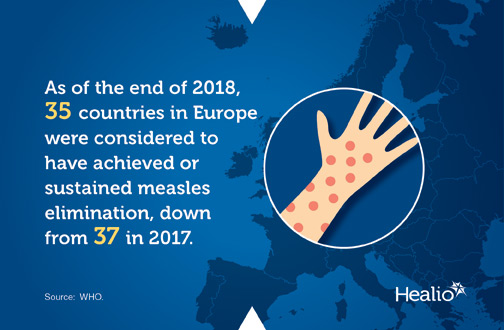 According to O’Brien, countries with very high measles vaccination coverage remain at risk for losing their elimination status because of small pockets or communities with coverage levels insufficient to prevent an outbreak. O’Brien noted that measles outbreaks can be caused by and affect not only young children but also adolescents, teens and adults with either insufficient or incomplete vaccination.

According to WHO, approximately 90,000 cases of measles were reported in the first half of 2019 in Europe, already more than the 84,000 cases that were reported in all of 2018. A total of 35 countries in the region were verified as having achieved or sustained measles elimination in 2018, down from 37 in 2018, WHO said.

The agency said it will continue to internally classify the ongoing circulation of measles in the region as a grade 2 emergency — a designation that allows it to “mobilize the technical, financial and human resources needed to support the affected countries,” according to the release.

“Great efforts to control this highly contagious disease have brought us a long way toward regional elimination,” Zsuzsanna Jakab, PhD, WHO regional director for Europe, said in the release. “However, ongoing measles outbreaks demonstrate that more is needed. Through activation of the emergency response, WHO has increased its focus on measles elimination and upgraded its action.”

A country is considered to have eliminated measles if no single strain of the virus has circulated for 12 months or more, there is high vaccine coverage and good measles identification systems are in place.

The U.S. will lose the measles-free status it achieved in 2000 if a case linked to one of the two outbreaks in New York City and Rockland County, New York, is recorded in October, a CDC spokeswoman recently confirmed to Infectious Disease News. As of Aug. 26, there were nearly 1,000 cases reported from the two outbreaks, and more than 1,200 cases reported in 2019 in the U.S. – by Joe Gramigna

Since 2000 and the launch of the Millennium Development Goals, we have seen extraordinary public health gains through the expansion of global vaccination programs. Much of that success can be attributed to a successful United Nations partnership between Gavi, the Vaccine Alliance, WHO and UNICEF. Tragically, we may be experiencing a partial unraveling of those gains with the return of measles and other preventable diseases to both Europe and North America (mostly the U.S.). Vaccine coverage has declined in several areas on both continents because of an aggressive and mostly unopposed antivaccine movement that now dominates the internet and has become politically active. We need to recognize the threat of this antivaccine movement and take steps to confront and dismantle it. Otherwise, I'm concerned it will also begin affecting Africa, Asia and Latin America, if it hasn't already.