Over a 10-year period in Hawaii, health officials identified 82 cases of rat lungworm disease, two of which were fatal, according to findings published in The American Journal of Tropical Medicine and Hygiene.

Rat lungworm disease, or angiostrongyliasis, is caused by Angiostrongylus cantonensis, a parasitic nematode passed by infected rats in their feces. Recently published findings showed it is widespread in New Orleans, raising the risk for infection among humans. Other studies have linked the rat lungworm parasite to consuming raw centipedes or raw vegetables.

Rat lungworm is endemic in Hawaii, where it has been a reportable disease since 2007, according to David I. Johnston, MPH, epidemiologist with the Hawaii State Department of Health, and colleagues.

Johnson and colleagues reviewed angiostrongyliasis cases reported to the state health department between 2007 and 2017 and identified 82 cases over the 10-year period, of which 62% (n = 51) were confirmed and the other 38% (n = 31) were probable. According to a news release, 10 more cases were reported in 2018 and another five have been reported in 2019, but those cases were not included in the study. 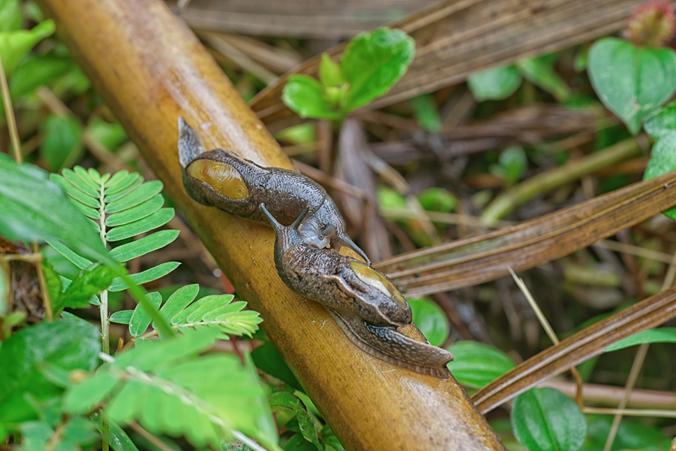 Researchers identified a species of semi-slug (shown here mating) as a potential intermediate host in Hawaii of the parasite that causes rat lungworm.
Source: Adobe Stock

When investigating the source of infection, Johnston and colleagues highlighted the invasive Parmarion cf. martensi — also known as a semi-slug, which is half snail and half slug — as a potential intermediate host. The semi-slug can carry a high concentration of rat lungworm parasites and climbs “more frequently” compared with other slug and semi-slug species, according to Johnston and colleagues. Moreover, the invasive semi-slug is attracted to “rich food sources,” including bird food, dog food and fruits, they reported.

The researchers also noted other rat lungworm carriers in Hawaii, including the Cuban slug, the giant African snail and the marsh slug. Slugs and snails become infected by ingesting rat feces.

Ingesting raw or undercooked intermediate hosts is the primary source of infection in humans, Johnston and colleagues noted. Although the specific exposure event was not identified in many of the Hawaii infections, Johnston and colleagues highlighted some where it was, including an individual who ate a slug on a dare and a group of people who found slugs at the bottom of a serving bowl after drinking the contents.

“As we continue to increase our understanding of rat lungworm disease in Hawaii and the risk factors associated with infection, we apply what we learn to improve our prevention efforts in the state,” Johnston told Infectious Disease News. “These efforts are focused on educating the public about the disease, how it is transmitted, and the best prevention strategies.

“We have also focused on education of our health care providers and recently the clinical work group of the Hawaii Governor’s Joint Task Force on Rat Lungworm Disease published for the diagnosis and treatment of rat lungworm.” – by Marley Ghizzone

Angiostrongylus cantonensis, the rat lungworm, is a parasite of rodents that can infect humans after ingestion of larvae within slugs, snails or other invertebrates. In humans, A. cantonensis can migrate to the brain, causing eosinophilic meningitis. Treatment is uncertain, as antihelminthics may worsen brain inflammation. A. cantonensis was originally described in Southeast Asia and the South Pacific, but it is now appreciated to cause disease in much of the tropics, including tropical areas of the Americas and Australia. Notably, the worm is endemic in Hawaii. The report by Johnston and colleagues describes 82 cases of A. cantonensis infection reported in Hawaii from 2007 to 2017; 51 of these cases were confirmed, the others probable. Cases were most common from January to April; 68 were from the island of Hawaii. The most common presentations included headache, arthralgias, myalgias and stiff neck in those over 10 years and fever and vomiting in children. CSF commonly demonstrated eosinophils. Of the 82 cases, 65 were hospitalized and two died. For travelers to Hawaii, an obvious recommendation is to avoid eating uncooked slugs or snails, but in addition, uncooked fruit and vegetables, which may be contaminated with A. cantonensis, should be carefully washed before ingestion.