There was an estimated global total of 376.4 million new chlamydia, gonorrhea, trichomoniasis and syphilis infections in men and women aged 15 to 49 years in 2016, averaging out to more than 1 million new infections daily, according to the latest WHO data.

“STIs are treatable and curable with antibiotics but unfortunately, most of these infections occur without symptoms and thus people don’t realize they have the infection, they don’t realize they are at risk and they don’t go in for testing and treatment,” Melanie Taylor, MD, MPH, a medical epidemiologist in WHO’s Department of Reproductive Health and Research (RHR), said during a press briefing. “Thus, the opportunity to transmit the infection is quite high. The opportunity to transmit to sexual partners is high but also the risk of mothers to transmit these infections to their unborn babies is very, very high. These infections, if left untreated, can result in stillbirth, neonatal death, infertility among men and women, ectopic pregnancy, and increased risk of HIV transmission and acquisition.”

To generate the estimates for the report, researchers systematically searched for studies conducted between 2009 and 2016 that reported on the prevalence of certain STIs, and they also consulted regional experts. Overall, researchers found 130 eligible studies on chlamydia, gonorrhea and/or trichomoniasis. For syphilis, they found 978 data points in the Spectrum-STI database.

Results showed that the 2016 global prevalence for chlamydia, gonorrhea, trichomoniasis and syphilis among women was 3.8%, 0.9%, 5.3% and 0.5%, respectively. In men, prevalence estimates were 2.7% for chlamydia, 0.7% for gonorrhea, 0.6% for trichomoniasis and 0.5% for syphilis. According to the report, the total global estimate was 376.4 million infections — 127.2 million chlamydia cases, 86.9 million gonorrhea cases, 156 million trichomoniasis cases and 6.3 million syphilis cases. This estimate corresponds to an average just over 1 million new infections daily, although the number of individuals infected is smaller due to repeat infections and common coinfections, the researchers noted. 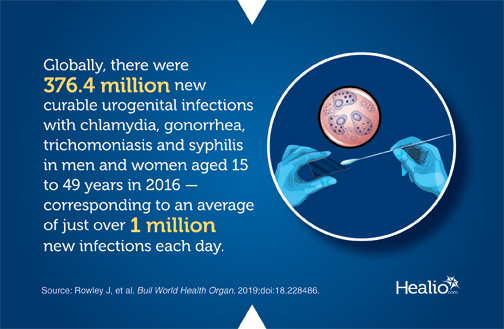 “STIs should not be treated any differently than other infections, and most importantly we cannot sweep them under the carpet and pretend they do not exist,” Teodora Wi, MD, a WHO medical officer on STIs with the Department of RHR, said during the press briefing. “We are all in this together. For policymakers, make sex safer and support STI services … For program managers, researchers and experts, continue to find better ways to prevent, diagnose, screen and treat STIs … For our health care providers, respect the right of everyone to make sexual choices that fit with their own personal values ... For STI patients, be open about your sexuality so you can receive the appropriate care ... For those who choose to have sex, be rational, be responsible, be safe and have fun. Use a condom correctly and consistently. If you think you have an STI, do not be ashamed. Go to your doctor and make sure you don’t transmit to others.” – by Caitlyn Stulpin

WHO’s estimate of the 2016 global burden of common STIs, including chlamydia, gonorrhea, trichomoniasis and syphilis, is important for anyone interested in the epidemiology, diagnosis, management and prevention of STIs. The numbers generated by Rowley and colleagues’ meta-analysis of studies published between 2009 and 2016, supplemented by consultation with regional experts, is impressive, indicating a total estimated incidence of 376.4 million: in other words, 1 million new cases per day. As staggering as that number is, it is important to remember that its foundation is less than ideal, because active surveillance for these critical infections is lacking in most of the world. Despite that, the report substantiates what the CDC has called an “STI crisis” domestically is — not surprisingly — a global problem.

The WHO STI report by Rowley and colleagues further reaffirms the findings of CDC’s 2017 STI surveillance report, which showed a resurgence of the incidence of STIs, both locally in the United States and globally. Insufficient attention and resources directed toward STI prevention with young people and adolescents who account for half of new STI cases in the U.S. is a big issue. The high costs, inadequate insurance coverage and inconsistent access of STI screenings and treatment have been a challenge in the U.S. In addition, stigma and discrimination, including by clinicians, remain huge barriers to thwarting better responses to the STI epidemic. This report, along with others, will help agencies upscale and guide their evidence-based interventions commensurate with the scope of the epidemic.