A rapid public health response was credited with keeping a “massive” anthrax outbreak at a national park in Namibia from spilling over to infect humans or livestock, according to a report published today in Emerging Infectious Diseases.

“Human anthrax cases are known to be associated with outbreaks in animals,” Caitlin M. Cossaboom, DVM, PhD, MPH, an Epidemic Intelligence Service officer in the CDC’s Bacterial Special Pathogens Branch, told Infectious Disease News. “In fact, contact with animals that have died from anthrax is the most common route for humans to become infected with anthrax.”

According to the report, between late September and early October 2017, Namibia’s Ministry of Environment and Tourism (MET) identified a sudden die-off of hippopotamuses and Cape buffalo in Bwabwata National Park. When the number of carcasses topped 100, the MET notified the Ministry of Agriculture, Water, and Forestry (MAWF) and the Ministry of Health and Social Services (MOHSS).

The CDC was consulted and assisted with the investigation, and a CDC field team collected paired samples from seven animal carcasses. Using a novel assay that can rapidly test samples in the field without refrigeration, Cossaboom and colleagues came to a presumptive diagnosis of anthrax. Bacillus anthracis infection was later confirmed by culture, real-time RT-PCR and immunohistochemistry. 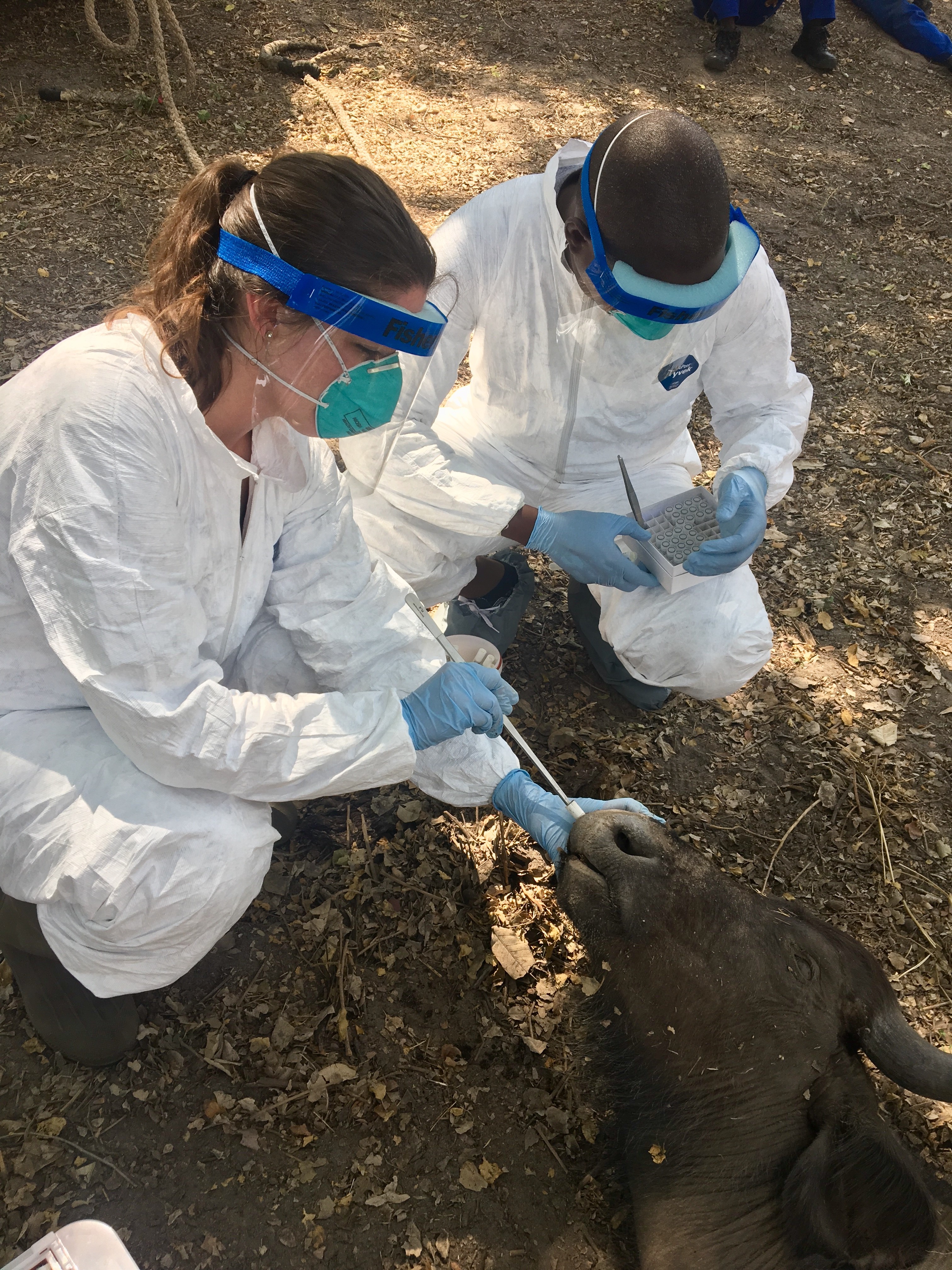 Interventions were initiated quickly. According to Cossaboom and colleagues, the MOHSS developed and distributed a questionnaire to identify possible exposures in people living near the park and found that 1,050 people reported contact with or consuming meat from the carcasses. Each was given 2 weeks of ciprofloxacin for postexposure prophylaxis and monitored for symptoms, they said.

According to the report, the MOHSS also raised awareness of the ongoing outbreak through education efforts and emphasized that people should not have contact with or consume animals that are already dead.

No humans were infected, Cossaboom and colleagues reported. In contrast, another team of researchers reported in 2017 that more than 500 people were infected and five died in Zambia after being exposed to anthrax via the meat of dead hippos.

“In this investigation, unlike previous outbreaks we have seen, 1,050 people were quickly identified that had been exposed to anthrax, and thus had risk of becoming sick,” Cossaboom said. “This highlights the importance of rapid response to anthrax outbreaks in animals, including rapidly identifying people who have been exposed and providing them with post-exposure prophylaxis, in order to prevent humans from getting sick.”

According to Cossaboom and colleagues, livestock vaccination against anthrax is required annually in Namibia to protect domestic animals and humans from infection. To prevent spillover from the Namibia outbreak into susceptible domestic animals, the MAWF secured approximately 10,000 doses anthrax vaccine for a mass vaccination campaign.

Due to the size of the outbreak, field workers were unable to incinerate all of the dead animals — the recommended disposal method of carcasses infected with anthrax. Instead, they buried them at least 2 m underground to discourage scavengers and then sprayed the burial sites with 10% formaldehyde.

No cases of anthrax in livestock were associated with the outbreak, and wildlife deaths subsided by early December, Cossaboom and colleagues said. By then, 155 hippos and 86 Cape buffalo had been disposed of, but Cossaboom and colleagues noted that an earlier aerial survey of the park showed that 588 hippos and 2,216 Cape buffalo — around 26% and 4% of each population — had been impacted by the outbreak.

“We want to highlight the importance of a rapid, multi-sectoral or One Health approach when responding to anthrax outbreaks. Anthrax is endemic in many countries throughout the world,” Cossaboom said. “Animals get infected and die when they are exposed to anthrax in the environment. Human cases of anthrax often occur associated with animal outbreaks, but fortunately in this case, because of the rapid response by all partners, there were no cases of human anthrax despite the massive outbreak in wildlife.” – by Marley Ghizzone