Trump announces 10-year plan to end HIV epidemic in US

During his second State of the Union address on Tuesday night, President Donald J. Trump asked for a bipartisan commitment to end the HIV epidemic in the United States by 2030 — a call that was met with skepticism by some experts.

“Scientific breakthroughs have brought a once-distant dream within reach,” Trump said. “My budget will ask Democrats and Republicans to make the needed commitment to eliminate the HIV epidemic in the United States within 10 years. We have made incredible strides, incredible.”

HHS hosted a briefing call today with a panel of experts to discuss the new federal plan in further detail. Adm. Brett P. Giroir, MD, HHS Assistant Secretary for Health, said the strategy could fundamentally change the trajectory of HIV.

“HIV has cost America too much for too long,” he said. “Our progress has plateaued, and we are now seeing 40,000 new infections in the United States each year.” 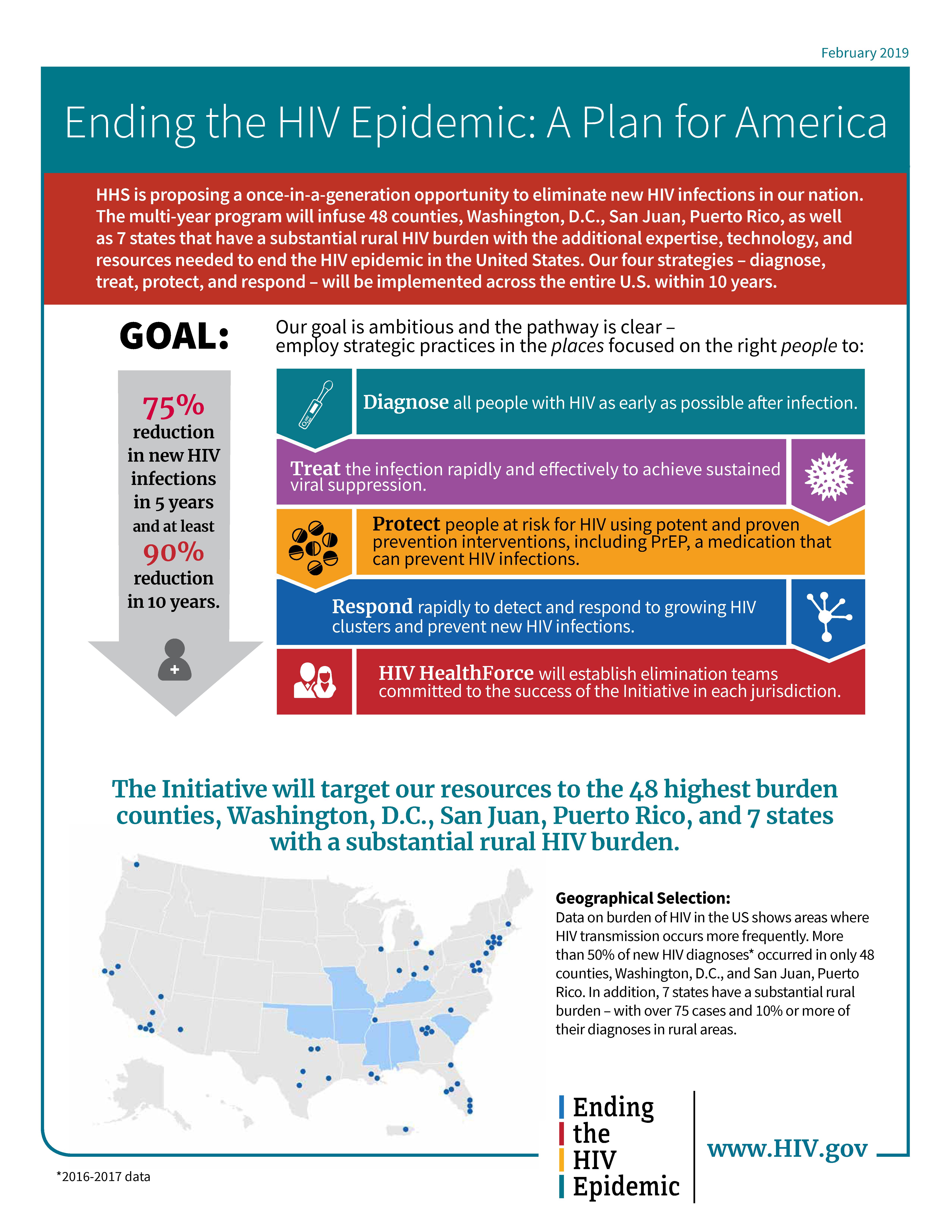 A plan to end the HIV epidemic in the U.S. by 2030 will focus on ”hot spots” of transmission.
Source: HIV.gov

New laboratory and epidemiological techniques and mapping have helped identify which geographic regions of the U.S. are in greatest need of additional resources and support. The new plan will target “hot spots” where new infections are clustered — including the South — to help detect, diagnose and rapidly treat new cases using ART.

During the first 5 years, a heavy focus will be placed on more than 40 counties with the highest HIV burden in urban settings, and seven states with a substantial rural burden. Among other things, the strategy will focus on increasing the use of pre-exposure prophylaxis for HIV prevention, and leveraging the Ryan White HIV/AIDS Program’s system of care and treatment to help increase viral suppression around the country to 90%, according to the plan.

“In short, we will diagnose all people as early as possible, treat rapidly and effectively, protect those at highest risk, respond to any outbreaks with an overwhelming force, and we’re going to create a public health workforce throughout this country with a specific goal of reducing new diagnoses by 75% within 5 years and 90% within 10,” Giroir said.

Experts on the subject expressed skepticism of the strategy based on the administration’s attitude toward HIV/AIDS thus far.

“The pledge to end HIV by 2030 is completely contrary to many of the policies of this administration,” Scott A. Schoettes, HIV project director at Lambda Legal, told Infectious Disease News. “First and foremost, we need universal access to health care, and this administration and the Republicans have made it their goal to dismantle and/or undermine the Affordable Care Act at every opportunity and have no real alternative or plan to replace it.

“People living with HIV who are in care have an excellent prognosis and they become non-infectious after adhering to treatment for a relatively short time. But if people don’t have access to comprehensive care and treatment, those benefits are not available.”

Schoettes was one of six members of a presidential HIV/AIDS advisory board who publicly resigned in 2017, just months after Trump was inaugurated, saying they believed the president “simply does not care” about the subject of HIV/AIDS. Last year, the administration fired the remaining members of the council, leaving some experts to worry that there was no remaining avenue of communication with the White House on the issue.

“I won’t believe this president is really committed to achieving this goal until he starts talking off-teleprompter at his rallies and stops advocating for polices that work directly against it,” Schoettes told Infectious Disease News.

Another former member of the council, Lucy Bradley-Springer, PhD, RN, editor of the Journal of Association of Nurses in AIDS Care and associate professor emerita at the University of Colorado Denver Medical School, said ending HIV transmission in the U.S. by 2030 is possible, but rated the probability that it could be achieved by this administration as “very low.” 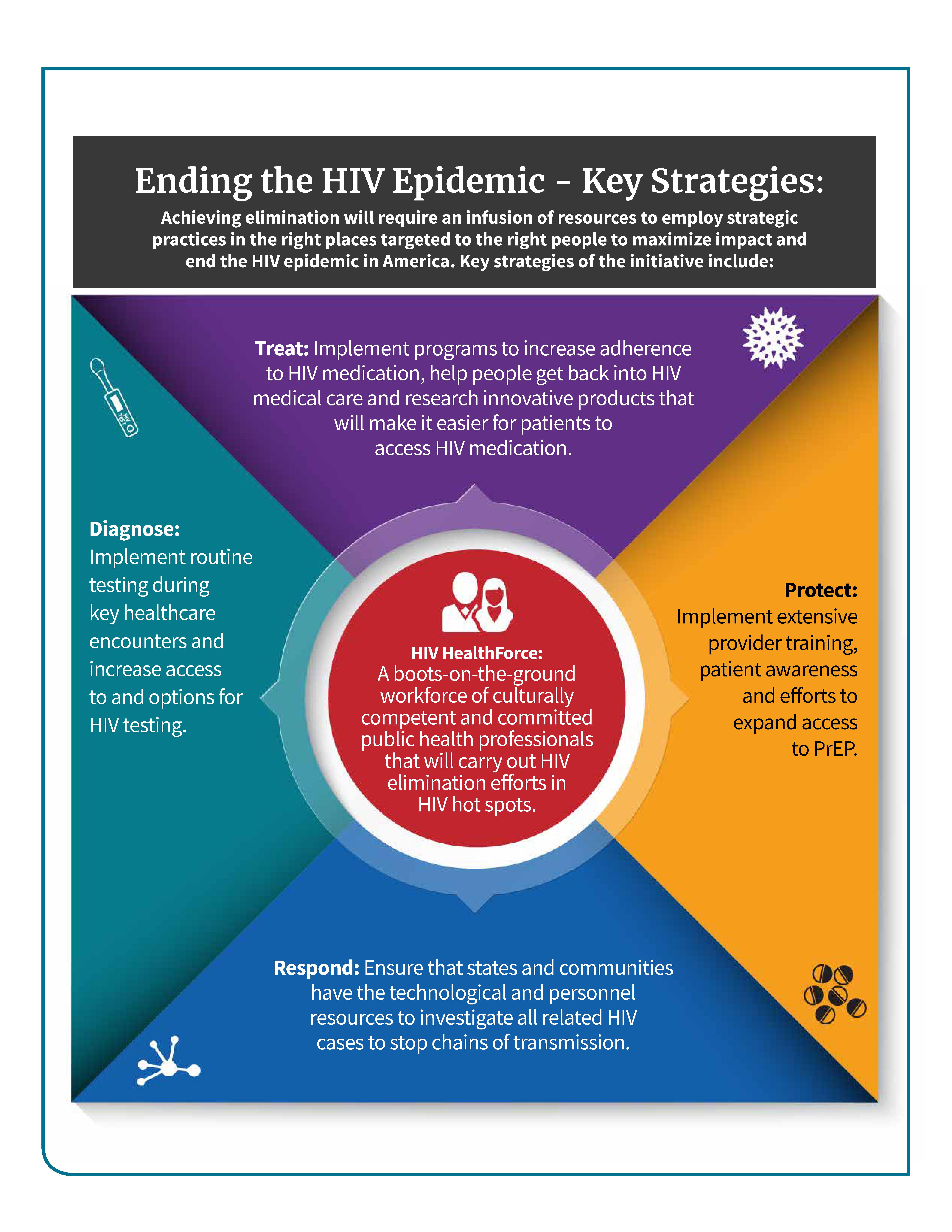 Key strategies of the plan to end the HIV epidemic in the U.S. by 2030 include diagnosing patients early, treating them rapidly and effectively, protecting people at highest risk for infection and responding to outbreaks.
Source: HIV.gov

Reached before the address, Bradley-Springer said she would watch Trump speak with “a whole load of skepticism” and that she would believe there was an honest policy commitment if the administration reversed restrictions on the roles of gay, lesbian and transgender members in the armed services; commited to comprehensive women’s health care, including birth control; developed a plan to provide comprehensive and universal health care coverage; and provided federal support for needle and syringe exchange programs, among other changes.

“Basically, we would need the political will to accept a global approach to human rights and provide funding to overhaul the health care system, change people’s attitudes, get people tested and treated and stop discriminating against communities at risk,” Bradley-Springer told Infectious Disease News.

Jeffrey S. Crowley, MPH, program director of infectious disease initiatives at the O’Neill Institute for National and Global Health Law at Georgetown University, said the administration has recruited “great people” to the effort, including Giroir and CDC Director Robert R. Redfield, MD, himself a longtime AIDS researcher. But Crowley said the new plan will require the administration to change course and support, rather than attack, the various parts of the HIV community.

“HIV is a serious public health threat in the U.S. and around the world. Often thanks to American investments in research, American innovation, and community activism by people with HIV and others, we have reached a place where we have effective tools to treat HIV and prevent transmission,” Crowley told Infectious Disease News. “Prioritizing HIV is important for strengthening our communities and making our country and the world healthier and safer. HIV is not the only challenge that requires urgent attention, but focused leadership can produce big results for the American people.” – by Caitlyn Stulpin