42% of adults with HBV are coinfected with HDV, study finds

In the United States, 42% of adults with hepatitis B virus are coinfected with hepatitis D, suggesting a need for routine HDV testing among people with HBV, according to study findings.

Eshan U. Patel, MPH, and colleagues from Johns Hopkins University said the results of their study suggest that the prevalence of HDV in the U.S. is “significantly higher” than previously acknowledged.

According to Patel and colleagues, the American Association for the Study of Liver Diseases recommends that patients who are positive for hepatitis B surface antigen (HBsAg) and at high-risk for HDV infection also be tested for the presence of HDV antibodies.

“Given that a high percentage of HBsAg-positive individuals in the study had antibodies to HDV, clinicians should consider routine HDV antibody testing for all HBsAg-positive patients,” Patel told Infectious Disease News. “Clinicians should also recommend vaccination against HBV infection to patients in all recommended populations to help prevent HBV and HDV transmission.” 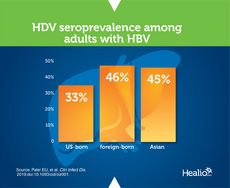 Patel noted that most people living with HBV are unaware of their infection, and that efforts are needed increase screening.

Screening patients for HBV susceptibility or infection, then vaccinating or treating them appropriately, was recently found to be cost effective, according to study findings published in Open Forum Infectious Diseases.

Unlike HBV, HDV is not a nationally notifiable infection and commercial RNA assays are not widely available, according to Patel and colleagues. For their study, they estimated the prevalence of ongoing HBV infections and seroprevalence of HDV infections in the U.S. using population-based data from the National Health and Nutrition Examination Survey (NHANES), a cross-sectional survey conducted by the National Center for Health Statistics on a continuous basis. Patel and colleagues used pooled data collected from 21,832 NHANES respondents with complete data on demographic characteristics from 2011 to 2016.

Patel and colleagues also found that HBV/HDV coinfected adults had higher serological markers associated with liver disease, especially compared with uninfected adults. Among HBsAg-positive adults, 30% (95% CI, 17%-46%) of individuals also positive for HDV reported a liver disease diagnosis compared with 9% (95% CI, 5%-16%) of those who were negative for HDV antibodies.

Although it was not evaluated in this study, Patel said that patients with HBV/HDV coinfection have worse clinical outcomes compared with HBV-monoinfected patients. – by Marley Ghizzone 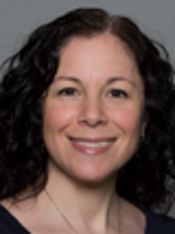 Coinfection with hepatitis B and D results in a severe form of viral hepatitis, and is associated with fast progression to liver fibrosis, liver cancer, decompensated cirrhosis and liver failure. Appropriate medical management and treatment are key to preventing serious liver disease and premature death in coinfected individuals. Unfortunately, both hepatitis B and D remain highly underdiagnosed in the U.S. and the world. Most people who are infected are unaware of their disease — and even when they are, few can access appropriate medical care. Results of this study indicate that more people are coinfected with hepatitis B and D in the U.S. than previously thought. These findings, along with other recently published studies, can be used to advocate for increased testing of hepatitis D among people who have known hepatitis B infection. As the authors note, it might be a good time to re-evaluate the current U.S. guidelines to recommend hepatitis D screening for all people with hepatitis B. Especially now, as new treatments for hepatitis D are moving through the research pipeline, it is critical that we improve identification of people with hepatitis B and D coinfection.

Without increased testing and a national hepatitis B surveillance system in place, we will continue to underestimate the burden of hepatitis B (and hepatitis D) in the U.S. NHANES has been critiqued as a means for assessing hepatitis B prevalence. Even with oversampling of Asian Americans, NHANES can be less than ideal for capturing a disease that primarily impacts non-English speaking, foreign-born, marginalized and hard-to-reach people (including Asians, Pacific Islanders and those of African descent) — communities that are not adequately represented. Published studies using strategies based on census data plus country-specific hepatitis B prevalence estimate that there are up to 2.2 million Americans infected with hepatitis B, a number much higher than 862,000. Whichever number we use, hepatitis B and D infection are significant health concerns in the U.S., and we need to increase prioritization of hepatitis B testing and treatment to prevent thousands of people from devastating illness and premature death.