Measles cases surged by 31% worldwide in 2017 — a troubling increase driven by gaps in vaccination coverage that have caused outbreaks of the highly contagious disease in every region of the globe, according to a new report.

The report, published today in MMWR, highlights gains made against measles since the turn of the century — including large decreases in annual incidence and deaths — but paints a grim picture of stagnant vaccination rates and increasing cases since 2010.

According to the report, measles caused nearly 110,000 deaths in 2017. New cases of the disease increased in five of six WHO regions since 2016 and rose more than 6,000% in the Americas alone amid an ongoing epidemic in Venezuela, where endemic transmission of the disease has been re-established.

A large outbreak of measles in Europe means that endemic transmission of the disease has also likely been re-established in some European countries, the authors said. 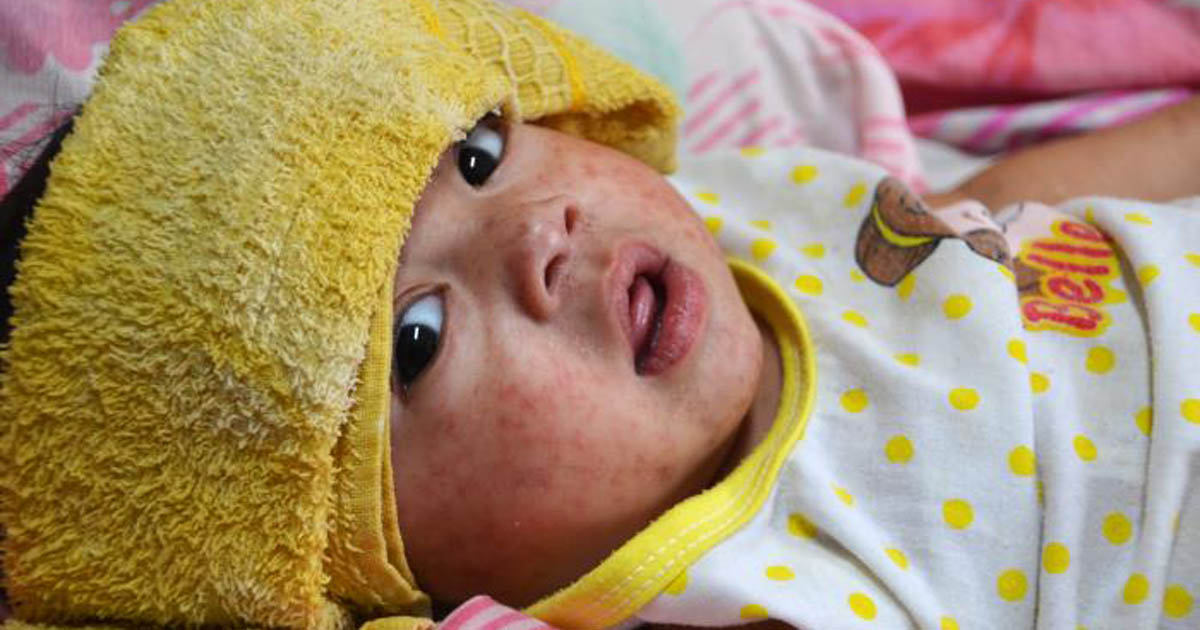 Gaps in vaccination coverage have caused recent measles outbreaks in every region of the globe.
Source: CDC/Molly Kurnit

“The resurgence of measles is of serious concern, with extended outbreaks occurring across regions, and particularly in countries that had achieved, or were close to achieving measles elimination,” Soumya Swaminathan, MD, deputy director-general for programs at WHO said in a statement.

“Without urgent efforts to increase vaccination coverage and identify populations with unacceptable levels of under-, or unimmunized children, we risk losing decades of progress in protecting children and communities against this devastating but entirely preventable disease.”

Global estimates of measles vaccination coverage come from data submitted to WHO and UNICEF by 194 countries and underline stalled progress against the disease.

According to the report, although global coverage with one dose of measles-containing vaccine rose from 72% to 85% between 2000 and 2017, virtually all that progress came in the first decade. The rate has remained between 84% and 85% since 2010, and most regions — including the Americas, where coverage hovers around 92% — have seen relatively constant rates, according to the report.

In fact, only the Western Pacific region, which includes China, Japan, Australia, New Zealand and other countries, has seen sustained coverage of more than 95% — the rate needed to prevent outbreaks — since 2006.

Measles is a difficult viral infection to contain. With a reported reproductive number (R0) in the double digits, the measles virus can rapidly spread among an unvaccinated or undervaccinated population, including infants aged younger than 12 months who are not yet old enough to be vaccinated.  For that reason, measles is often the first breakthrough infection we see if there is an interruption in vaccination programs. This report on a spike in measles cases resulting from vaccine coverage gaps reminds us about the fragility of global vaccination activities and how quickly measles will resurge because of breakdowns. In Latin America, the collapse of the Venezuelan economy and health system has caused an enormous measles outbreak that extends into Brazil, Colombia and Ecuador from the resulting Venezuelan diaspora into neighboring countries. But in the United States as well, we’re seeing sporadic outbreaks in Minnesota in 2017 and now in New York and New Jersey owing to the spread of phony antivaccine misinformation perpetrated by an aggressive American antivaccine lobby. In Europe and Israel, similar antivaccine activities have resulted in more than 50,000 measles cases so far this year. It’s tragic how anti-science movements in the U.S. and Europe have now severely affected public health. It’s a major reason I’ve just published my latest book, Vaccines Did Not Cause Rachel’s Autism (Johns Hopkins University Press), which is both a science book explaining why vaccines do not cause autism or other things antivaccine groups allege and also my personal story as autism dad. My hope is that the book helps to slow or halt an antivaccine movement that is reaching global proportions, as described in the new report.