Oft-cited stat may underestimate deaths from MDROs in US by 130,000

A CDC statistic frequently used to illustrate the scope of the threat of antimicrobial resistance in the United States may be a significant underestimation of the true burden, researchers said.

According to the oft-cited stat, at least 2 million illnesses and 23,000 deaths are caused by drug-resistant infections each year in the U.S. In fact, almost seven times as many patients may die from infections caused by multidrug-resistant organisms (MDROs), according to Jason P. Burnham, MD, instructor in medicine in the division of infectious diseases at Washington University School of Medicine in St. Louis, and colleagues.

Using available data from 2010, Burnham and colleagues estimated that at least 153,113 deaths in the U.S. were due to MDRO infections. Writing in Infection Control and Hospital Epidemiology, they said insufficient national reporting rates and an absence of ICD-10 codes make it difficult to know the “true burden.”

Burnham told Infectious Disease News that the CDC statistic “had always seemed like a significant underestimate to me.” 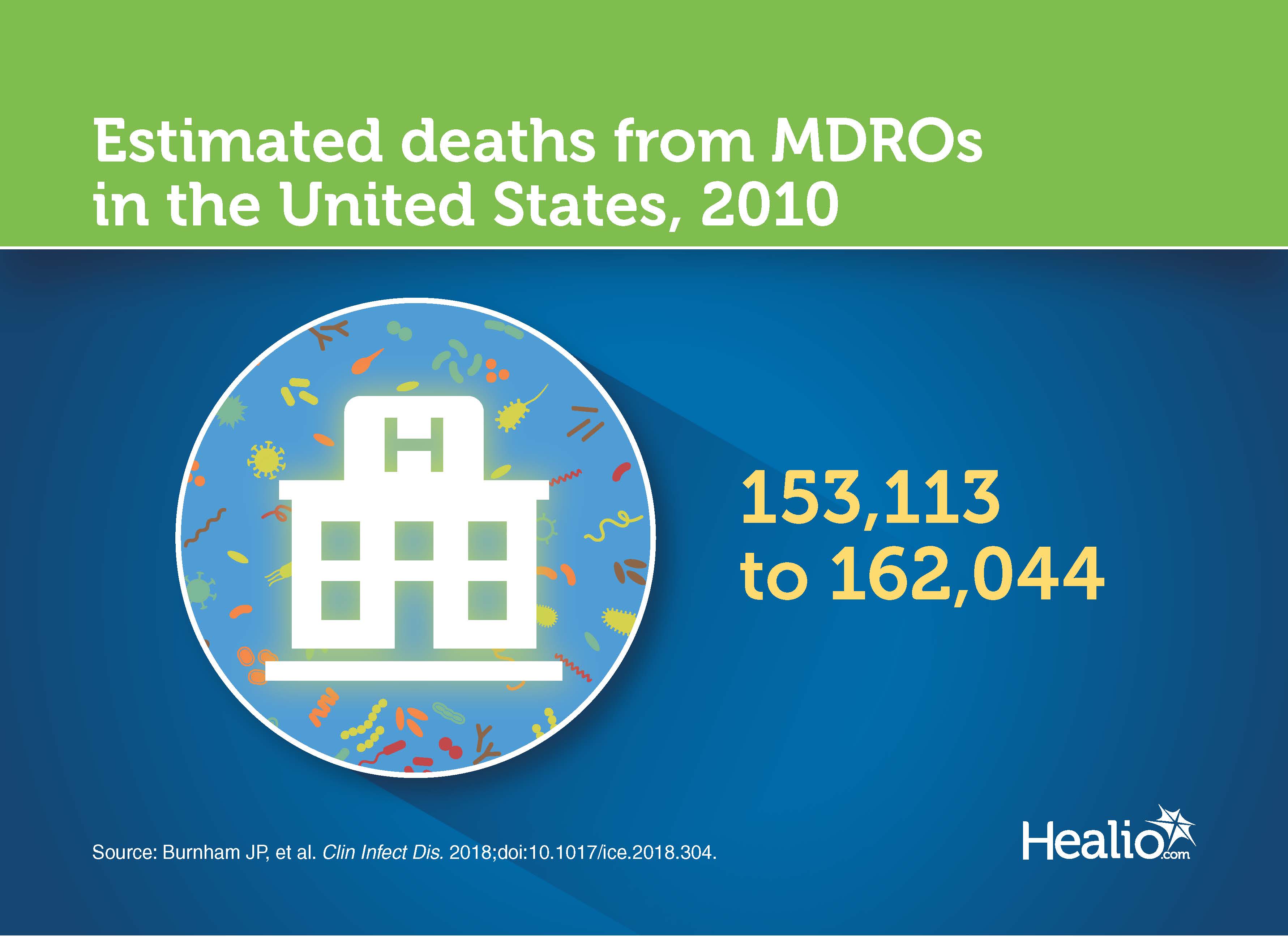 “Then a paper came out showing that Spain had approximately 35,000 deaths per year from MDROs and I knew that I had to try to come up with a better estimate for the U.S.,” he said. “The U.S. has seven times the population of Spain, so I knew we had to have more deaths due to MDROs than Spain.”

Burnham and colleagues explained how they reached their estimates using the 2,468,435 deaths registered in the U.S. in 2010.

Among the deaths, 29% (n = 715,000) occurred in hospital inpatients, they found. Based on conservative estimates showing that 34.4% of inpatient deaths occur in patients with sepsis, and a reported rate of multidrug-resistant pathogens in sepsis of 28.8%, Burnham and colleagues estimated that MDRO sepsis could potentially cause 70,837 deaths annually.

Starting with 1,753,435 outpatient deaths, Burnham and colleagues subtracted deaths unlikely to be due to infection — such as those from suicide, accident or homicide — and deaths attributed to infection, which left a remaining 1,550,536 deaths. Estimating that 17% to 19% of the remaining deaths were due to infection and 28.8% were caused by MDROs, Burnham and colleagues said there would be 82,276 to 91,207 deaths attributable to MDROs.

“Summing the lower bounds of our estimates for inpatient and outpatient deaths due to MDRO infections gives us 153,113 deaths, a number almost seven-fold higher than that estimated by the CDC,” they wrote.

When Burnham and colleagues assessed the worst-case scenario, they estimated that 162,044 deaths were caused by MDRO infections in the U.S. in 2010 — which would make it the third-highest cause of death in the country that year.

They said there is an urgent need for improved surveillance and reporting for MDRO infections.

“If hospitals and organizations — private or government — that fund research are not putting money into solving the MDRO problem, MDRO infections will overwhelm the medical system before we can find any way to stop them,” Burnham said. “MDRO infections are a huge burden in the U.S. and demand the attention of clinicians, researchers, the public, and the government.”– by Marley Ghizzone