Officials emphasize vaccination after flu season in which 80K died

WASHINGTON — Following a severe 2017-2018 influenza season in which an estimated 900,000 people were hospitalized and 80,000 died, United States officials reemphasized the need for everyone aged 6 months or older to get vaccinated.

“Those 80,000 who died, guess what, they got that influenza from someone,” U.S. Surgeon General Jerome M. Adams, MD, MPH, said Thursday during the annual influenza news conference hosted by the National Foundation for Infectious Diseases (NFID). “It’s critically important that we impress upon folks that it is their social responsibility to get vaccinated.”

Adams rolled up his sleeve to receive one of the first of a projected 168 million doses of influenza vaccine that will be available this season.

According to the NFID, influenza vaccination coverage among children aged 6 months to 17 years has remained steady but still falls short of national public health goals of 80% vaccinated. Last season, a small decline in coverage of 1.1% was observed in this population, dropping it to 57.9%. There was a decline of 2.2% in children aged 6 months to 4. The NFID noted that young children are at a particularly high risk of serious influenza complications because of their age. 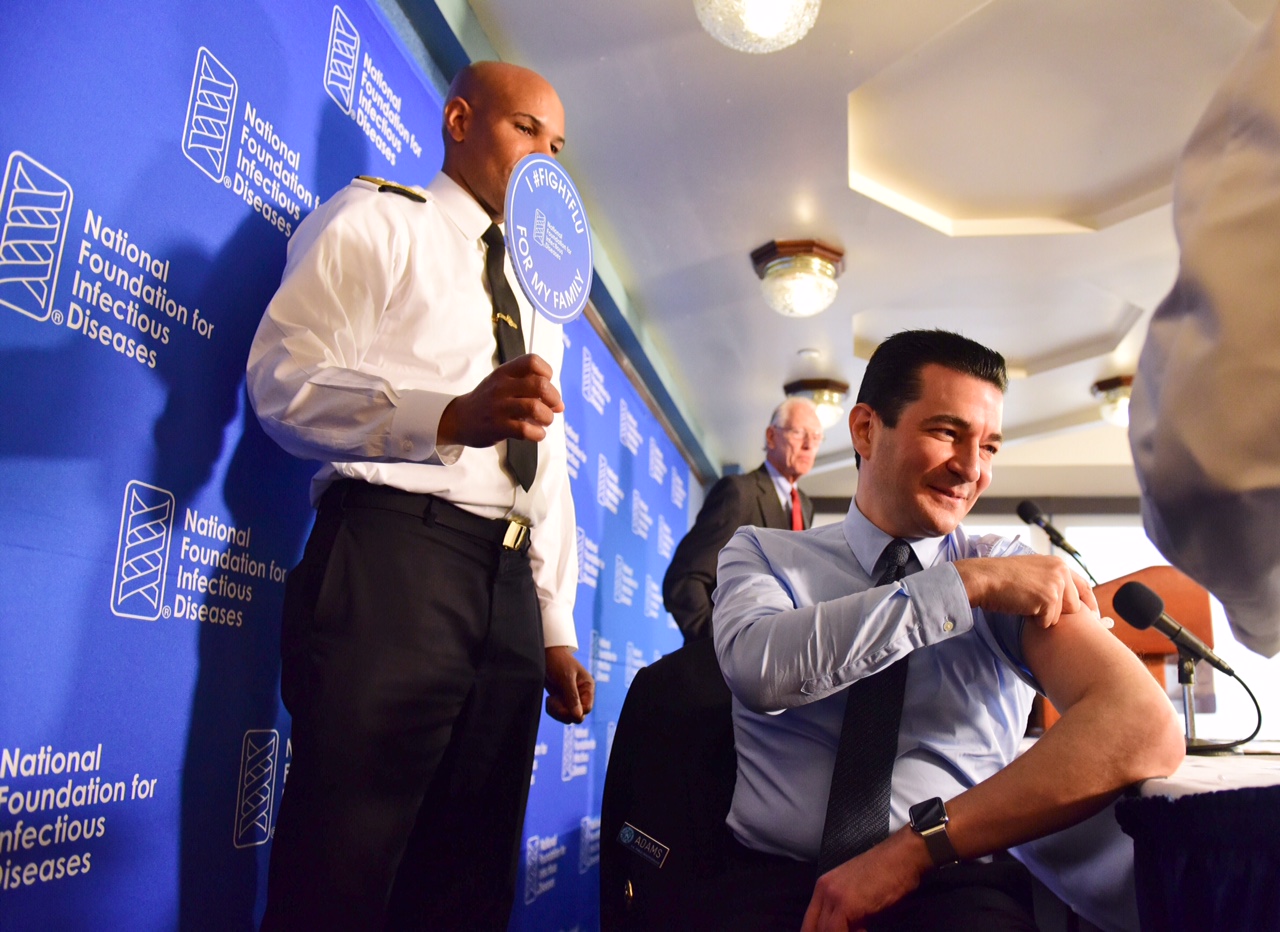 Adams said influenza caused 180 deaths in children last season “and the majority of them were not vaccinated.” The CDC believes 180 deaths is an underestimation because not all influenza-related deaths are reported.

“Just one flu death is too many. Flu vaccine can save children’s lives,” Adams said.

Despite a decline in coverage, vaccination rates were highest among children aged 6 months to 4 years, at 67.8%.

According to the NFID, protecting children begins by protecting pregnant women, who can suffer more severe illness and symptoms if they contract influenza. Because of this, the American College of Obstetricians and Gynecologists and the CDC recommend that all women who are pregnant or planning to become pregnant receive the influenza vaccine. During the 2017-2018 season, only about half, 49.1%, of pregnant women were vaccinated, according to CDC estimates.

According to Laura E. Riley, MD, Given Foundation Professor of obstetrics and gynecology and chair of the department of obstetrics and gynecology at Weill Cornell Medicine, women who do not get their influenza shot are at greater risk for having a baby with birth defects caused by high fever and early delivery, and they have a 60% higher chance of being hospitalized during their pregnancy.

According to a study published in MMWR, the CDC analyzed data from an internet panel survey conducted March 28 through April 10, which included 1,771 respondents who were pregnant during the peak of influenza season, from October 2017 to January 2018. Of these women, 49.1% reported receiving influenza vaccine and 54.4% reported receiving Tdap, which is also recommended by the Advisory Committee on Immunization Practices (ACIP). The two most commonly reported reasons pregnant women did not receive these vaccinations were concerns regarding effectiveness and concerns of safety risks for the baby.

“Influenza vaccination during pregnancy is safe,” Riley said in a news release. “Studies show that in addition to helping to protect pregnant women, a flu vaccine given during pregnancy helps protect babies from flu infection for their first several months of life, before they are old enough to be vaccinated.”

In addition to young children and pregnant women, the ACIP recommends that all health care personnel receive an annual influenza vaccination to reduce influenza-related morbidity and mortality among workers and patients, according to a second study published in MMWR. The CDC conducted an opt-in internet panel survey of 2,265 U.S. health care personnel to estimate influenza vaccination coverage. Overall, 78.4% reported receiving the vaccination last season, a 15 percentage point increase since 2010-2011, according to NFID.

The study showed that the highest coverage was associated with workplace vaccination requirements and was consistently higher among health care personnel working in hospital settings. Influenza vaccination coverage among health care personnel working in long-term care settings remains consistently lower than all other settings — a concerning finding considering many of them work as assistants and aides to the elderly, who experience lower vaccine efficacy and are at increased risk for severe disease, the authors said.

Additionally, older adults and those with certain chronic health conditions, such as heart and lung disease, diabetes and obesity, are at risk for serious influenza complications, according to NFID. Last season took the greatest toll on adults aged 65 years and older. According to the CDC, 70% of hospitalizations and 90% of deaths occurred in that age group.

“Influenza is difficult to predict and can cause serious complications even for the healthy,” Adams said. “Vaccination is the best thing you can do to protect yourself, your family, and my family. Together, let’s fight flu.” – by Caitlyn Stulpin