More than 41,000 adults and children in Europe were infected with measles in the first 6 months of 2018, exceeding all 12-month totals in this decade, WHO announced today.

“Following the decade’s lowest number of cases in 2016, we are seeing a dramatic increase in infections and extended outbreaks,” Zsuzsanna Jakab, PhD, WHO Regional Director for Europe, said in a news release. “We call on all countries to immediately implement broad, context-appropriate measures to stop further spread of this disease. Good health for all starts with immunization, and as long as this disease is not eliminated we are failing to live up to our Sustainable Development Goal commitments.”

WHO explained that France, Georgia, Greece, Italy, the Russian Federation, Serbia and Ukraine have each seen more than 1,000 infections. So far, Ukraine has been hit the hardest, with more than 23,000 people infected. Serbia has reported 14 deaths, the highest number among the impacted countries. 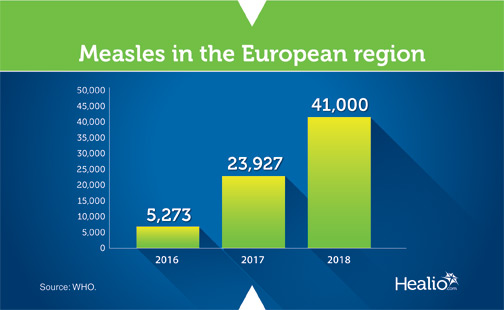 According to WHO, the latest assessment by the European Regional Verification Commission for Measles and Rubella Elimination (RVC) revealed that 43 of the region’s 53 member states have interrupted the endemic spread of measles. But the RVC expressed concerns about inadequate disease surveillance and low immunization coverage after concluding that chains of measles transmission continued for more than 12 months in some countries that had previously interrupted endemic spread of the disease.

“This partial setback demonstrates that every person who is not immune remains vulnerable no matter where they live, and every country must keep pushing to increase coverage and close immunity gaps, even after achieving interrupted or eliminated status,” Nedret Emiroglu, MD, PhD, Director of the Division of Health Emergencies and Communicable Diseases at the WHO Regional Office for Europe, said in the release.

According to WHO, at least 95% coverage with two doses of a measles-containing vaccine is needed each year in every community to prevent outbreaks of the disease.

“We must celebrate our achievements while not losing sight of those who are still vulnerable and whose protection requires our urgent and ongoing attention,” Jakab said. “We can stop this deadly disease. But we will not succeed unless everyone plays their part: to immunize their children, themselves, their patients, their populations — and also to remind others that vaccination saves lives.” – by Caitlyn Stulpin

The dramatic rise and return of measles to Europe is of enormous concern and possibly bordering on a public health emergency. Beyond the 40,000 cases and dozens of deaths, there is also no sign that these numbers are on the decline. In the 1980s measles ranked among the single leading killers of children globally, and now after so many public health gains since the launch of the Millennium Development Goals in Europe and in many Western states in the U.S., we have allowed measles to return. This is largely a self-inflicted wound caused by not challenging an organized and well-funded antivaccine lobby. My hope is that my new book this fall Vaccines Did Not Cause Rachel's Autism (Johns Hopkins University Press) might help to prevent future erosions in public health.