Community-onset Clostridium difficile infection, or CDI, accounts for a large proportion of CDI cases in the Veterans Affairs system, according to study findings published in Clinical Infectious Diseases. Researchers reported that patients with community-onset CDI tend to be younger and their cases less severe than patients with health care-onset CDI but are more likely to experience recurrent infections.

“In a retrospective cohort study of C. difficile infection in the VA system, of 15,972 patients, we found that almost half the reported cases were considered community–onset cases,” Nasia Safdar, MD, PhD, professor in the division of infectious diseases and vice chair for research in the department of medicine at the University of Wisconsin School of Medicine and Public Health, and associate chief of staff for research at the William S. Middleton Memorial Veterans Hospital in Madison, Wisconsin, told Infectious Disease News.

The researchers conducted a retrospective cohort study including all patients who tested positive for C. difficile by using data from the Veterans Health Administration between 2011 and 2014. 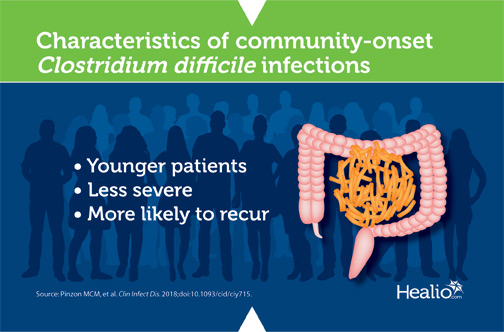 In assessing severity of the cases, 31% were classified as non-severe, 40% were severe and 21% were considered fulminant, Safdar and colleagues said. Forty-four percent of patients with health care-onset cases and 36% with community-onset cases received antibiotics within 90 days prior to CDI. In 53% of cases, patients had received a proton pump inhibitor (47% of community-onset cases, 62% of health-care onset cases). Risk factors for fulminant CDI included use of clindamycin (OR = 1.23; 95% CI, 1.06-1.44) or proton pump inhibitors (OR = 1.20; 95% CI, 1.12-1.29) in the 90 days prior to CDI diagnosis.

Safdar and colleagues noted recurrence in 18.2% of all cases. There was a 9.2% rate of 30-day all-cause mortality, with risk factors including older age, increasing Charlson score, case severity and exposure to extended-spectrum penicillin 90 days before diagnosis, they reported.

“Community-onset CDI accounts for a considerable reservoir of cases and effective prevention measures need to address strategies to prevent community-onset cases in addition to the traditional focus on prevention of health care-associated CDI,” Safdar said. – by Bruce Thiel