Japanese encephalitis — traditionally thought of as a rural disease — also circulates among pigs in nonrural areas of Cambodia, according to a recent study, suggesting that vaccination efforts should be expanded to encourage travelers to get immunized when traveling to these areas, researchers said.

According to the CDC, Japanese encephalitis virus is maintained in a cycle involving mosquitoes and vertebrate hosts, mainly pigs and wading birds. Human infections — caused by the bite of infected mosquitoes — are mostly asymptomatic, but a small percentage of people develop encephalitis. About 25% of cases are fatal, and there is no specic treatment, according to the CDC.

“The number of Japanese encephalitis cases has decreased substantially over the past decades with the implementation of childhood vaccination programs,” Julien Cappelle, DVM, PhD, health ecologist for CIRAD, and colleagues wrote in PLoS Neglected Tropical Diseases. “Japanese encephalitis virus, however, remains the most important cause of acute viral encephalitis in Eastern and Southern Asia, with an estimated 68,000 cases reported annually worldwide. Our results demonstrate that Japanese encephalitis virus circulates intensely in both a rural and peri-urban setting in Cambodia, which raises important public health concerns as peri-urban areas are densely populated.” 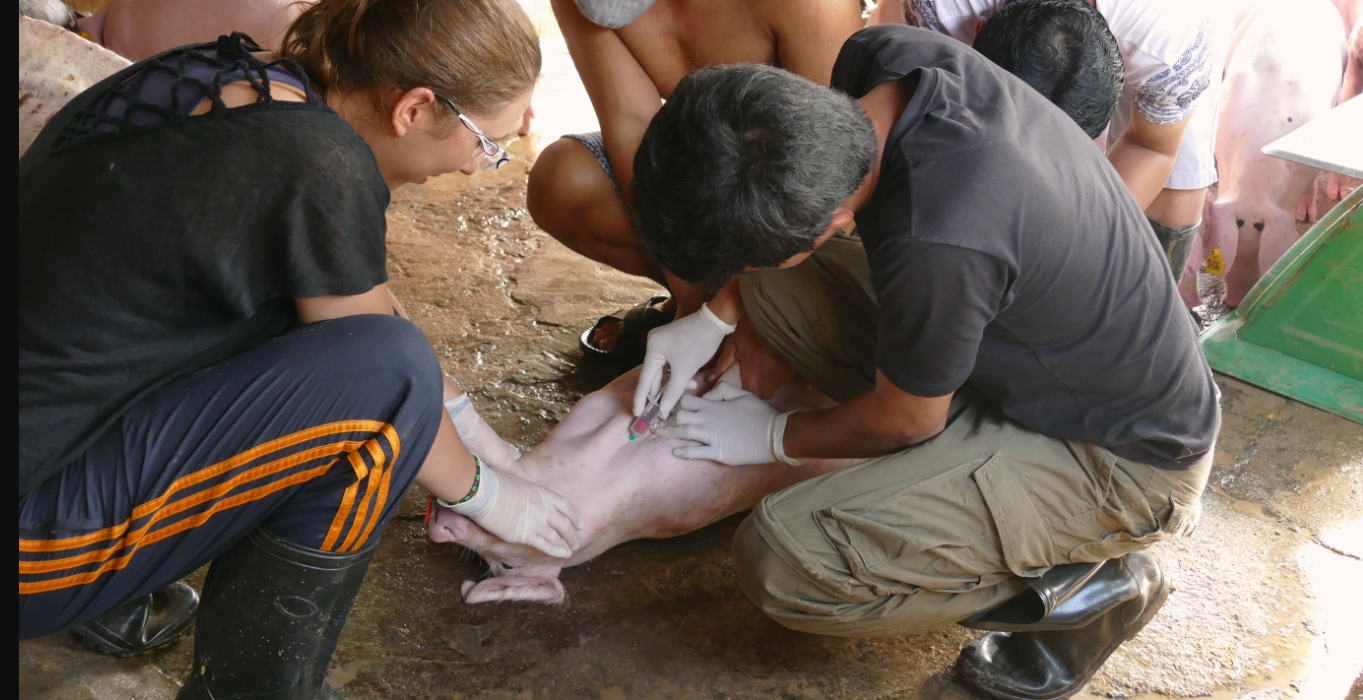 During the study, Cappelle and colleagues monitored 15 pigs at a rural farm and 15 pigs at a peri-urban farm in the southern suburbs of Phnom Penh, Cambodia’s capital. Throughout 2015, they collected blood samples from the pigs every 8 to 11 days, to limit handling and sampling stress, and tested the samples for Japanese encephalitis virus antibodies and RNA. According to the study, every pig tested positive for Japanese encephalitis virus antibodies by the time they were age 6 months. The force of infection — or the rate at which seronegative pigs become positive — was 0.061 per day at the peri-urban farm and 0.069 at the rural farm.

“Pigs' maternal antibodies waned much later in the rural farm than in the peri-urban farm,” Cappelle and colleagues reported.

Differences between the two locations included mosquito abundance and diversity, and host densities, the researchers said. They said these variables could account for pigs at the rural farm being infected later in their lives in addition to maternal antibodies being lost later in life.

With all the pigs in both study farms seroconverting before the age of 6 months, Cappelle and colleagues said the results confirm that Japanese encephalitis virus circulates intensely in rural as well as peri-urban settings, although it remains a mainly rural disease.

“These results support the importance of changing vaccination recommendations for travelers and of not focusing national immunization programs against Japanese encephalitis solely on rural areas.” – by Caitlyn Stulpin