Dogs are man’s best friend, but recent reports served as a reminder that they carry bacteria in their saliva that can cause disease, and even death, in humans.

In June, a man in West Bend, Wisconsin, had both hands and lower legs amputated after being infected with the bacterium Capnocytophaga canimorsus, possibly through contact with a dog, according to the Milwaukee Journal Sentinel. Two other recent cases were reported in Wisconsin, according to the paper: a boy aged 3 years who had his fingers and toes amputated after being exposed to C. canimorsus, and a woman who was bitten by her dog and developed rapidly progressing influenza-like symptoms that resulted in her death.

Infectious Disease News spoke with Caitlin Cossaboom, DVM, PhD, an Epidemic Intelligence Service officer in the CDC’s Bacterial Special Pathogens Branch, about the frequency of C. canimorsus infections, the populations at higher risk for contracting the disease and what pet owners should be aware of. – by Marley Ghizzone. 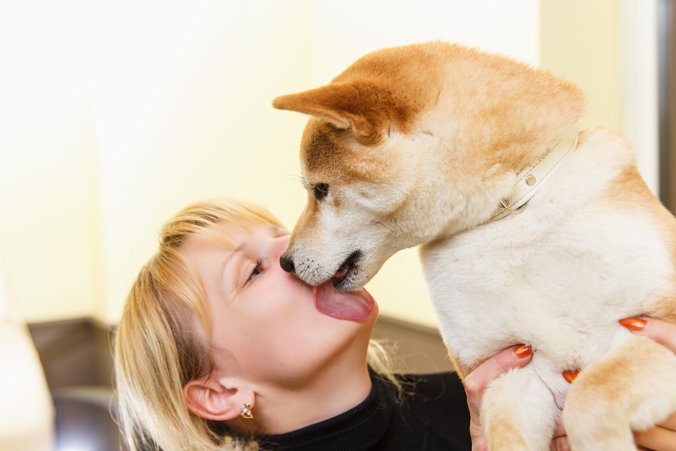 Recent case reports demonstrate the harms of Capnocytophaga canimorsus bacteria in dog saliva, which can cause severe disease and death in humans.
Source: Adobe Stock

C . canimorsus is a bacteria that commonly is found in the mouths of dogs and cats. It does not make dogs or cats sick but in rare cases has caused disease in humans, especially people who are asplenic (do not have spleens) or have a weakened immune system.

How do people become infected?

Clinical disease is rare, but people can become infected with Capnocytophaga bacteria through bites, scratches or close contact with dogs or cats. Most people who have contact with dogs and cats do not become sick from Capnocytophaga. People with weakened immune systems who already have difficulty fighting off infections are at greater risk of becoming ill.

Are these infections a serious problem?

Typically, Capnocytophaga does not cause disease in humans, and most human contact with dogs and cats — even through bites — does not result in illness. However, in rare cases, people can develop illness from this infection. This is most common in people who are asplenic, have a history of excessive alcohol use or have a weakened immune system for other reasons (for example, people who have cancer, HIV, liver disease, or take certain medications like steroids that make it more difficult to fight off infections). In the rare cases when illness disease develops, it can be serious and rapidly fatal without antibiotic treatment. Most people who become ill will begin showing symptoms within 3 to 5 days, but this can range anywhere from 1 day to 2 weeks. Signs and symptoms can include blisters around the bite wound within hours; redness, swelling, draining pus or pain at the bite wound; fever; diarrhea and/or stomach pain; vomiting; headache and/or confusion; and muscle or joint pain. Approximately three out of 10 people infected with Capnocytophaga die, and some infections can lead to death in as little as 24 to 72 hours after symptoms start. If someone does develop clinical signs consistent with Capnocytophaga infection after a dog or cat bite or contact with their saliva, they should seek medical care immediately. 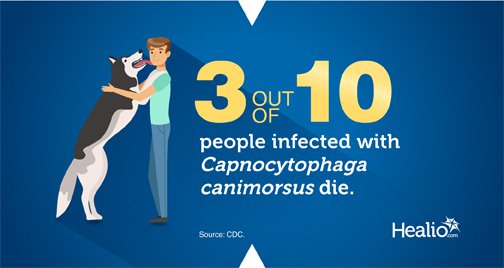 What is the incidence of infections per year?

Capnocytophaga infections are not nationally reportable, so there is no national estimate of the number of infections that occur every year. Additionally, Capnocytophaga can be easily diagnosed by routine microbiology laboratory tests, so many cases of the disease are likely diagnosed and treated by health care providers without ever being reported to CDC. MicrobeNet, CDC’s online reference library, has received reports of 12 positive cases in the past year. These are likely only the most severe cases or those in which diagnosis was complicated for some reason. However, these do not include the most recent cases that have been reported by the media.

What do pet owners need to be aware of?

Many dogs and cats have Capnocytophaga in their mouths (normal oral flora), and it does not cause them illness. Animals can be tested, but a negative result may not mean the animal will always be negative, and the same is true for a positive result. Although animals could be given medicine to kill the bacteria in the short term, they can still get the bacteria again through contact with other animals. It is important that people with weakened immune systems take this into consideration when they are considering getting a new pet. However, it is still important to emphasize that most contact with dogs and cats does not result in a Capnocytophaga infection or any illness. CDC’s Healthy Pets Healthy People [webpage] has tips for these high-risk groups on how to have safer contact with pets: https://www.cdc.gov/healthypets/index.html.

What should clinicians know about this infection?