Diphtheria: The disease that shouldn’t be

Diphtheria is a vaccine-preventable disease affecting mainly children. The primary immunization of three doses of the diphtheria toxoid in infancy is routine throughout the world, except where it isn’t. With proper childhood immunization and boosters, there should be little or no diphtheria. Although it is possible for immunized people to develop diphtheria, the disease is much less severe. In the unimmunized population, the mortality rate is 5% to 10%, and deaths occur mainly in the very young and the very old.

About 7,000 cases of diphtheria were reported in the world in 2016. Most were from India and Madagascar. However, there is thought to be a great deal of underreporting. Diphtheria is rare in the United States, with only two cases reported between 2004 and 2015.

In recent years, diphtheria has been in the headlines in three countries where the disease had been virtually eliminated — Venezuela, Yemen and Bangladesh.

In 2016, an outbreak of diphtheria was reported in Venezuela, a country that historically had an excellent health care system. That health care system suffered along with other institutions as the country descended into economic chaos over the past 2 decades. Cases of diphtheria were initially reported in July 2016, and by the end of that year, there were hundreds of cases, according to the Venezuelan Society of Public Health and the “Let’s Defend Epidemiology” network (although only 31 cases were reported to WHO in 2016 by Venezuela). As of February 2018, a total of 969 probable cases have been reported, 324 of which occurred in 2016 and 36 in 2018, with a case fatality rate of over 15% in confirmed cases. More than 70% of the cases in Venezuela were aged 11 years or older.

Starting in October 2017, an outbreak of diphtheria was reported in Yemen. As of March 12, 2018, there were 1,294 suspected cases and 73 deaths. Yemen has had many problems because of the war there. There has been a total breakdown of medical care related to the fighting and blockade of the ports, resulting in medical supply shortages and a lack of medical personnel. The population has been facing starvation and a very large outbreak of cholera.

In Bangladesh, more than 800,000 Rohingya Muslims are living in refugee camps. The Rohingya fled from Myanmar in late August 2017 after Rohingya militants attacked Myanmar police, causing a security crackdown. The Rohingya joined an existing refugee population, some of whom had been in the camps for years. They are living in squalid conditions and have brought diphtheria with them from Myanmar. The Rohingya have an historically low incidence of immunization. As of Jan. 31, 2018, more than 5,000 suspected cases and 37 deaths have been reported since the start of the outbreak.

Diphtheria is mediated by a toxin produced by the causative organism Corynebacterium diphtheriae, which is an aerobic gram-positive bacillus. The toxin inhibits cellular protein synthesis and causes local tissue necrosis and membrane formation. Interestingly, only C. diphtheriae that are infected with a lysogenic bacteriophage carrying a gene for the toxin are toxigenic. Nontoxigenic C. diphtheriae usually completely lack the toxin gene, but there are some nontoxigenic strains that do carry it. These strains are genotypically toxin positive but do not express the toxin; they are called nontoxigenic toxin gene-bearing (NTTB) strains. Strains without the bacteriophage do not produce the toxin and therefore rarely cause disease. C. ulcerans strains carrying the bacteriophage are also capable of causing diphtheria. 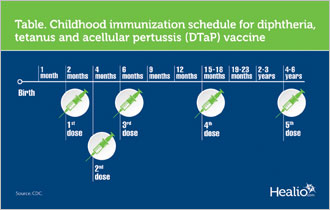 There is no known animal host for C. diphtheriae. The disease is spread by respiratory droplet nuclei from asymptomatic carriers, as well as from infected individuals. Fomites can also spread infection, and infected skin ulcers have been found to spread disease to other susceptible hosts and result in respiratory or cutaneous infection. Unlike C. diphtheriae, human-to-human transmission of C. ulcerans has been documented only once. C. ulcerans is a commensal organism in animals, and the species has been isolated from both domestic and wild animals, which can serve as reservoirs for human infection. C. ulcerans causes mastitis in cattle and goats, and contact with infected dairy animals and consumption of contaminated milk has been associated with respiratory diphtheria-like disease, as has contact with pet dogs and cats.

The usual site of disease is the nasopharynx and tonsils, where in susceptible people, the C. diphtheriae produces its toxin that is responsible for local tissue destruction and membrane formation. C. diphtheriae is generally not invasive and remains in the superficial layers of the mucosa or skin ulcers. Certain strains of nontoxigenic C. diphtheriae have been reported to cause invasive disease, such as bacteremia or endocarditis with a fulminant course and metastatic abscesses.

Following a usual incubation period of 2 to 5 days (range, 1-10 days), inflammation develops at the site of involvement with a blue-white pseudomembrane that turns dirty gray. The pseudomembrane may be black if there has been bleeding. There is low-grade fever and pain at the site of involvement. The areas involved may be restricted to the nose or the pharynx (tonsillar involvement is common) and can extend down to the larynx or even the trachea and bronchi. Diphtheria can involve only the larynx. Local edema can produce airway obstruction and death. The pseudomembrane is adherent to the underlying tissue and its removal will cause bleeding. Severe disease may produce marked edema of the submandibular areas and the anterior neck, which together with cervical adenopathy, can result in what has been described as a “bull neck” appearance.

The toxin produced by C. diphtheriae not only causes damage to the underlying respiratory mucosa, but it is also absorbed and circulates systemically in the blood, which can result in damage to multiple organs. The degree of toxicity is related to the extent of the local infection. With large amounts of toxin absorbed, there can be severe systemic toxicity with hypotension, renal failure, coma and death.

Myocarditis is common and may be manifested by arrhythmias, conduction defects and in severe cases, heart failure and even death. The conduction abnormalities can persist after recovery. Symptoms and signs may occur early in the illness or can be delayed for 1 to 2 weeks.

Neurotoxicity starts with paralysis of the soft palate and other pharyngeal muscles (most often in the third week of illness), resulting in regurgitation through the nose of fluids that have been swallowed. Other cranial nerves may subsequently be involved causing paralysis of eye movements or facial muscles. Peripheral neuritis mainly involving muscle weakness can then occur moving from proximal to distal areas. It may occur as early as 10 days into the illness and as late as months afterward. Peripheral neuropathy with stocking and glove sensory manifestations may also occur. The neurological manifestations are usually reversible.

Chronic indolent skin ulcers from which C. diphtheriae are isolated, often along with Staphylococcus aureus and/or group A streptococci, occur most frequently in the tropics. Classically, the ulcers are covered with a dirty gray membrane but often are not. Despite toxin production, signs or symptoms of toxicity are rare. The major significance of cutaneous diphtheria is that the organism can disseminate from the ulcer and infect others, producing classical diphtheria. C. ulcerans can produce a similar clinical picture. Cutaneous diphtheria has been observed in outbreaks among the homeless in the U.S.; however, these organisms were usually nontoxigenic. Cutaneous diphtheria can be related to travel to tropical countries where diphtheria is endemic.

On rare occasions, other areas such as the vagina or conjunctivae may be the sites of infection.

The diagnosis of diphtheria is made on clinical grounds and confirmed by culture. A PCR test for the diphtheria toxin gene has been developed; it is sensitive, but not all positive findings indicate toxin producers (ie, NTTB strains). The Elek test is an in vitro immunodiffusion assay to determine if a strain of C. diphtheriae is toxigenic. A test strip of filter paper containing diphtheria antitoxin is placed in the center of the agar plate, and the patient’s clinical isolate is also streaked on the agar’s surface in a line across the plate and at a right angle to the antitoxin paper strip. The presence of a precipitin line at a 45-degree angle to the streaks indicates that the strain is toxigenic.

In addition to supportive therapy, which includes keeping the airway open, the primary approach to the treatment of diphtheria is the administration of diphtheria antitoxin as early as possible and therapy with antibiotics. Antitoxin is available from the CDC as hyperimmune globulin (horse serum) but is not available commercially in the U.S. The antibiotics of choice are penicillin or erythromycin for 14 days. Patients should be isolated until two cultures 24 hours apart are negative (usually starting after 48 hours of treatment). Cultures should also be taken at the end of therapy to prove the elimination of the organism. Asymptomatic carriers should be treated with erythromycin for 7 to 10 days or with a single injection of benzathine penicillin. Fully immunized individuals can become asymptomatic carriers of C. diphtheriae.

The recommended immunization schedule by the CDC is five doses before the age of 7 years of diphtheria toxoid combined with tetanus toxoid and acellular pertussis (DTaP) vaccine at 2, 4, 6 and 15 to 18 months of age, followed by a booster at ages 4 to 6 years with DTaP. The tetanus, diphtheria and pertussis (Tdap) vaccine, which has a reduced dose of the diphtheria and pertussis components, is approved as a booster for adolescents at age 11 to 12 years. Boosters of diphtheria and tetanus toxoid (Td) are then given every 10 years. Tdap can be given as one of these boosters if the patient has never received Tdap before.

Diphtheria, the disease that shouldn’t be, is preventable with immunization. It exists and causes outbreaks where there are inadequate public health systems because of poverty, war, displacement of populations, natural disasters or neglect.