‘Lab on a chip’ platform detects disease antibodies in minutes

Researchers developed a toaster-sized “lab on a chip” platform that can detect disease antibodies in a matter of minutes using only a small volume of blood — making it a cheaper, faster and more convenient way to determine a person’s risk for infection in low-resource settings with limited access to laboratories.

The system, called MR Box, relies on digital microfluidics — a high-tech alternative to modern chemical laboratory techniques. It was developed in the microfluidics lab of Aaron R. Wheeler, PhD, professor at the University of Toronto.

Wheeler and colleagues field-tested the platform in a remote refugee camp in Kenya, using it to test blood samples for antibodies to measles and rubella. The results, obtained in just 35 minutes, were comparable to follow-up tests conducted in a laboratory, Wheeler and colleagues reported in Science Translational Medicine.

“This study is exciting because it brought digital microfluidics out of the laboratory and made it possible to use this technology in remote locations as a point-of-care system,” Caitlin A. Czajka, PhD, associate editor of the journal, said during a teleconference. 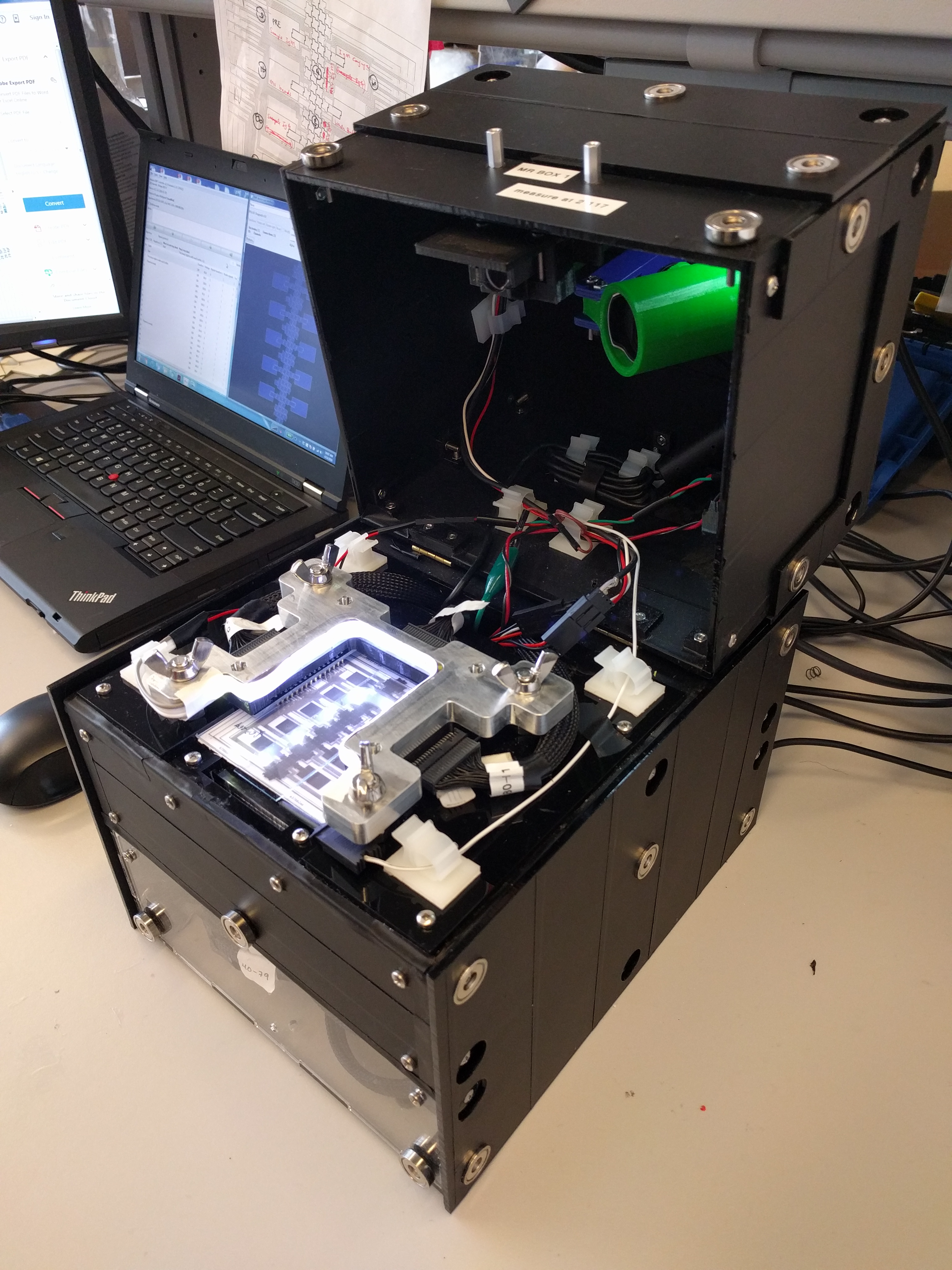 Researchers said the MR Box could be used to quickly and cheaply test a person’s risk for infectious diseases in low-resource settings like refugee camps.

Traditionally, microfluidic technology involves pumping fluids through tubes about the size of human hair, but digital microfluidics does not use tubes, Wheeler explained.

“Rather, samples and reagents are manipulated as droplets on a checkerboard of electrodes,” he said. “In essence, this type of device can serve as a ‘lab on a chip’ that recapitulates the functions of a modern chemical laboratory in a package that can fit in the palm of the hand.”

The idea for the field test arose out of conversations that Wheeler had with experts at the CDC. From May 23 to June 3, 2016, in the Kakuma refugee camp in northwestern Kenya, researchers tested children aged 9 to 56 months (n = 67) and caregivers (n = 77) for antibodies to measles and rubella. The children were tested around 2 weeks after they were vaccinated against measles and rubella, and the caregivers were tested at the time of enrollment.

The system was able to determine whether a person was at risk for measles or rubella by detecting if they had antibodies to either disease from a prior infection or vaccination, said co-author Aimee Summers, PhD, MHS, epidemiologist in the CDC’s Emergency Response and Recovery Branch.

She said the device could be useful among people displaced by humanitarian emergencies who are often at risk for infections, such as the Rohingya refugees in Bangladesh. In theory, it could help stop outbreaks and guide vaccination efforts.

Traditional testing involves storing and shipping samples, which must be kept cold. It also requires a larger amount of blood compared with the MR Box, whose cartridges cost about $6 apiece during the study, but could one day cost just pennies, researchers hope.

“In general, it is difficult to assess whether displaced populations or persons living in remote settings are at risk of infection for measles or rubella, due to often poor immunizations and little knowledge of previous infections,” Summer said.

According to Wheeler, the technology could be used to test for antibodies against more than just measles and rubella and could even be developed to diagnose infections. His lab is also working on tests for malaria and Zika.

“It’s a platform technology that we could imagine having a panel of tests for any type of infectious disease,” Wheeler said. – by Gerard Gallagher