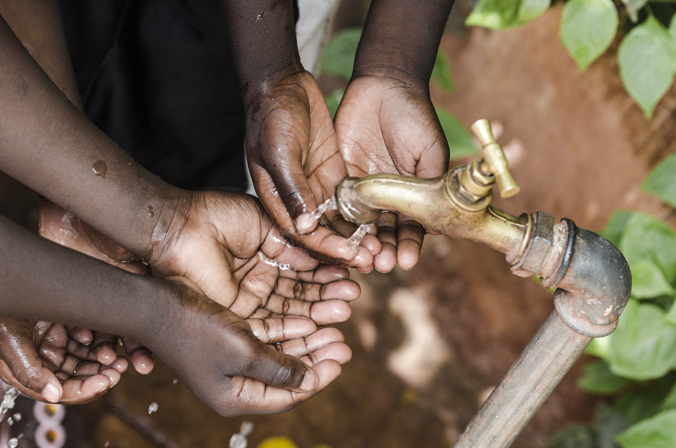 Access to piped water was associated with a lower risk for transmission among household contacts of Ebola patients in a recent study.
Source: Adobe Stock

A study conducted during the worst Ebola virus epidemic on record identified risk factors for transmission of the disease among household contacts, along with other factors that can be protective, including access to piped drinking water.

Almost 29,000 people were infected in the West African Ebola epidemic — most of them in Guinea, Liberia and Sierra Leone — and more than 11,000 died.

For their study, Mary R. Reichler, MD, researcher in the CDC Division of Tuberculosis Elimination, and colleagues enrolled 150 Ebola patients and 845 of their household contacts in and around the capital of Freetown, Sierra Leone, which saw widespread transmission during the West African Ebola epidemic. Study participants were enrolled from Dec. 15, 2014 — just after the peak of the Freetown epidemic — through April 30, 2015.

The researchers defined a household contact as someone who spent at least 1 night sharing the same residence or indoor living space as the index patient after symptom onset. They interviewed all study participants — heads of household were interviewed by proxy for most infected patients — and followed up with contacts for 21 days to determine if they developed Ebola or died. Index patients ranged in age from 2 months to 90 years, but most were between the ages 20 and 40 years.

Among the 838 household contacts included in the study, 9.9% developed Ebola, including 74 confirmed and nine probable cases, Reichler and colleagues reported. Less than 1% of the contacts reported touching the body of an index patient after their death — a major risk factor for infection because most Ebola patients die at peak viremia, the researchers noted.

According to their analysis, the risk for household transmission among study participants was 3.5-fold higher when an index patient died. The household transmission rate was also higher when an index patient had symptoms of Ebola infection but no reported fever, spent more days with wet symptoms — vomiting, diarrhea or bleeding — or was aged younger than 20 years. The rate was more than three times higher among contacts who cared for an index patient, few of whom reported wearing improvised protective barriers against infection.

According to Reichler and colleagues, avoiding the index patient and having access to piped drinking water — likely because it facilitated better hygiene practices — were associated with lower transmission rates. They said efforts to minimize contact with Ebola patients by designating one care provider per household could minimize the risk in future outbreaks.

“These findings could be used to develop more effective practices to reduce household secondary transmission,” they concluded. “These could include optimizing community educational messaging about risk factors and protective measures, increasing suspicion of [Ebola virus disease] based on the presence of symptoms with or without fever, and developing approaches to prioritize identifying and managing high-risk contacts.” – by Gerard Gallagher