CDC documents hundreds of cases of ‘unusual’ bacterial resistance in US

State and local health departments reported hundreds of cases of rare bacterial resistance in patients in the United States during the first 9 months of 2017, according to new data published today by the CDC.

The infections were related to carbapenem-resistant Enterobacteriaceae (CRE) — the so-called “nightmare bacteria” — and were uncovered as part of a new CDC strategy to contain unusual types of antibiotic resistance that have not yet spread widely in the U.S., Anne Schuchat, MD, acting principal deputy director of the CDC, said during a teleconference about the findings.

According to a Vital Signs report, testing by state and local laboratories in the CDC’s Antibiotic Resistance Laboratory Network (ARLN) identified 221 instances of CRE with rare resistance mechanisms between January and September of last year.

The federally funded ARLN is a network of regional, state and city labs in the U.S. and Puerto Rico that was established by the CDC in 2016 to look for pathogens like CRE and carbapenem-resistant Pseudomonas aeruginosa (CRPA). It is part of the agency’s Antibiotic Resistance Solutions Initiative, which Congress has funded with $323 million in appropriations over the past 2 fiscal years. 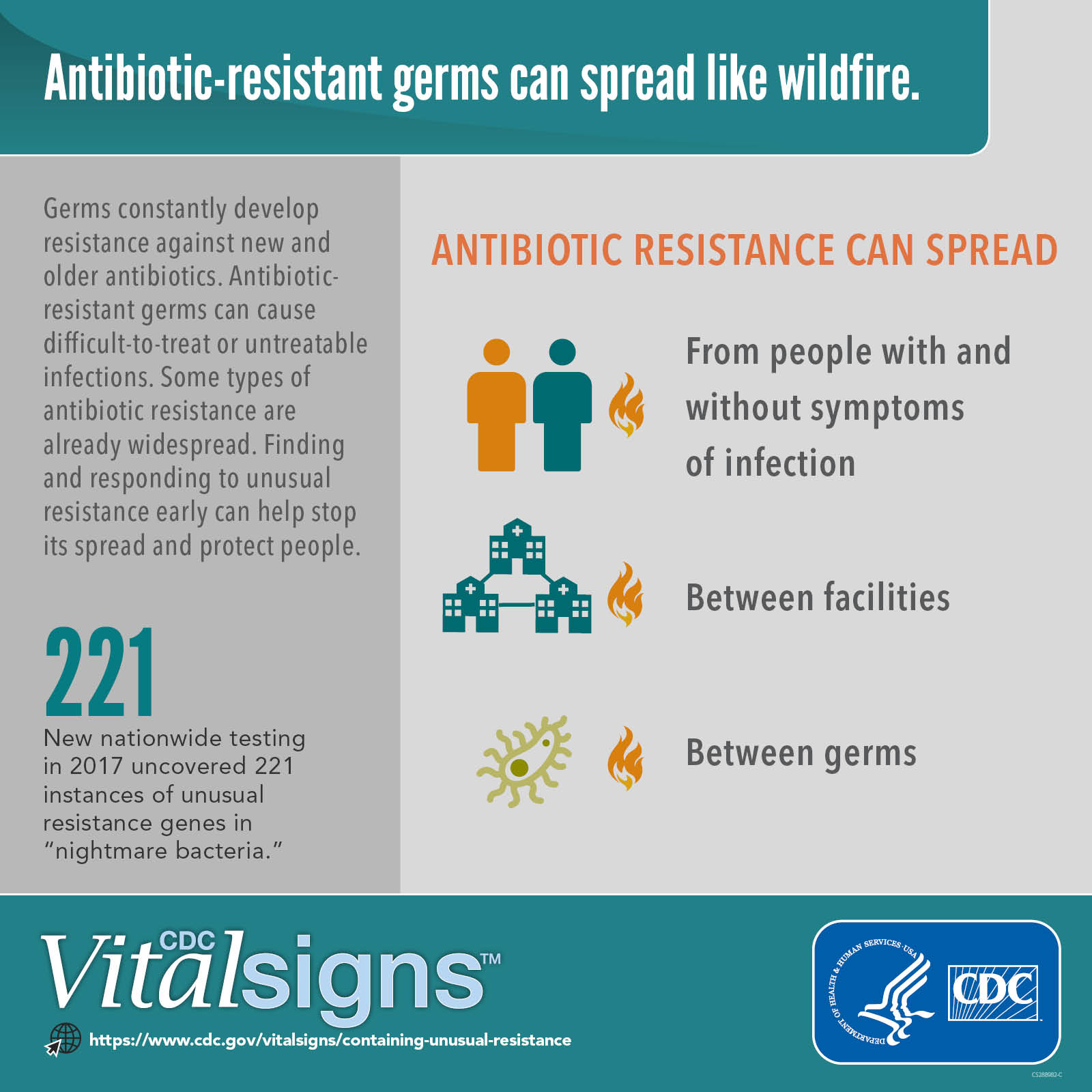 In 2017, state and local health departments identified 221 cases of what the CDC characterized as “unusual” antibiotic resistance genes in carbapenem-resistant Enterobacteriaceae, or “nightmare bacteria,” among hospitalized patients.
Source: CDC

Because it was the first time that data from the ARLN were available, Schuchat said there is no way to tell if the number of what she called “unusual” bacteria in U.S. health care centers is trending up or down.

“I can tell you that I was surprised by the numbers we found. It was more than I was expecting,” she said.

More than 23,000 Americans die each year of antibiotic-resistant infections, according to the CDC. Enterobacteriaceae, which include Klebsiella species and Escherichia coli, are the most common cause of health care-associated infections. The CDC has prioritized halting the spread of CRE and other multidrug-resistant organisms through a new containment strategy that encourages facilities and public health authorities to respond to a single isolate.

According to the new report, among 5,776 specimens of highly resistant pathogens that were tested by ARLN and CDC labs, approximately 1 in 4 contained a gene that helped spread its resistance, and there were 221 instances of an especially rare resistance gene — carbapenemase-producing isolates that expressed carbapenems other than Klebsiella pneumoniae carbapenemase (KPC).

As part of the CDC response, asymptomatic health care contacts of infected patients were screened for resistant pathogens, and 11% of the tests came back positive for one of the five mechanisms of resistance — or carbapenemases — that are of primary public health concern: imipenemase (IMP), KPC, New Delhi metallo-beta-lactamase (NDM), oxacillinase-48-like carbapenemase (OXA-48) and Verona integron-encoded metallo-beta-lactamase (VIM).

The isolates came not only from hospitals, but also from nursing homes, especially those that treat very ill patients, in particular nursing homes where patients are on ventilators, said Arjun Srinivasan, MD, associate director for health care-associated infection prevention programs in the CDC’s Division of Healthcare Quality Promotion.

“What we found is that these types of unusual resistance and the spread poses even more of a challenge in some of those nursing homes,” Srinivasan said. “That’s an area where we’re really actively trying to work with the community, with providers [and] state and local partners, to better understand how we can optimize the control of the spread of that resistance in those settings where it’s very challenging.”

Schuchat said many clinicians and health care facilities may not be aware of the new initiative that provides increased access to laboratories and staff for antimicrobial testing.

“What we need is clinicians and labs in hospitals and health care facilities to be aware of this opportunity, to look for the resistant infections and recognize they can get help from the start,” Schuchat said. “Because the more you look, unfortunately, the more you find.” – by Gerard Gallagher

The fact that approximately 1 in 10 asymptomatic individuals at targeted facilities harbor dangerous resistant bacteria is particularly worrisome. Halting asymptomatic transmission from carriers of these bacteria may be an important strategy to implement. It will be important for future studies to investigate the dynamics of how asymptomatic carriers spread these bacteria and what surveillance approaches are most effective. The carriage rate is a fact that is alarming but not surprising given the steady march of antibiotic resistance and the lack of robust antibiotic stewardship programs in many health care settings. The report underscores the public health threat and infectious disease emergency humanity faces with these highly resistant organisms that could disrupt modern medicine.