More than 2 years after former pharmaceutical executive Martin Shkreli boosted the price of Daraprim by 5,000%, the cost still exceeds $800 per pill in many pharmacies.

Daraprim (pyrimethamine) is the primary treatment option for toxoplasmosis, a disease caused by the parasite Toxoplasma gondii, which can cause severe infections in people living with HIV, although the company that owns the drug has just begun the process of testing a possible alternative treatment.

When Shkreli was CEO of Turing Pharmaceuticals in 2015, the company increased the price of pyrimethamine from $13.50 per pill to $750 per pill. Soon after, the company announced plans to lower the price but would not specify when or by how much.

Shkreli eventually resigned as CEO of Turing, which has since changed its name to Vyera Pharmaceuticals. He was later convicted of securities fraud in an unrelated case and sentenced to 7 years in prison, among other penalties.

However, despite the heavy media attention following the price hike, the cost of the drug has not gone down, and patients with toxoplasmosis face the choice of dealing with the cost of pyrimethamine and turning to less-proven alternatives. 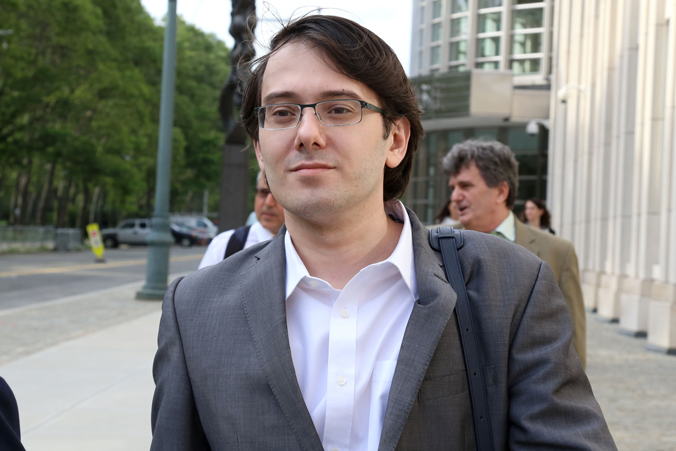 In 2015, former pharmaceutical executive Martin Shkreli raised the price of Daraprim, a treatment for the parasitic disease toxoplasmosis, by 5,000%. Although the manufacturer announced plans to lower the price of the drug, it still costs $800 per pill in many pharmacies.
Source: Shutterstock.com

Wendy S. Armstrong, MD, a professor of medicine at the Emory University School of Medicine and a past chair of the HIV Medicine Association, is witnessing patients face such a dilemma. Armstrong has been treating a patient who received a kidney transplant and has toxoplasmosis. The patient has been treated with pyrimethamine and other medications. For almost 4 months, the patient has been ready to transfer to a nursing home, Armstrong said. But no nursing home has been willing to accept her because of the cost of pyrimethamine.

“[Pyrimethamine] is our best choice, but we’re stuck,” Armstrong said. “There are alternative drugs that can be used, but they’re not well-studied. And [this] is a very severe case.”

Armstrong mentioned that a combination of pyrimethamine and leucovorin is one alternative for patients with toxoplasmosis. Leucovorin is often prescribed along with pyrimethamine to counteract bone marrow side effects. But the combination is not approved by the FDA, and providers can shy away from the potential liability, she explained.

In late 2015, Imprimis Pharmaceuticals announced that the company would offer the combination in a single pill containing 25 mg of pyrimethamine and 5 mg of leucovorin. A bottle of 100 pills cost $99. Imprimis CEO Mark Baum told CNBC that the company would make a profit from sales of the pills, further emphasizing that Vyera’s price increase of pyrimethamine was unjustified.

“It is ridiculous that we have to search for other options when we have a drug that works well,” Armstrong said. “There is no earthly reason for the price [of pyrimethamine] to be so high.”

She acknowledged that drug price increases can be understandable because of the expenses and rigors of their development and production, but stressed that no such rationale exists for the pyrimethamine price hike.

“Dropping the price is the best option because we know [pyrimethamine] works very well,” she said.

In September 2015 — shortly after the price increase — a Turing spokesman told Infectious Disease News that the company was “investing in the scientific development of new and improved formulations of [pyrimethamine], as well as investigating new therapeutics that we hope will help eradicate the disease.”

But Armstrong at the time countered that experts were satisfied with the drug’s efficacy and that side effects were minimal and easily managed. In February, Vyera announced it would begin a phase 1 study on what it calls TUR-006, a drug with a dihydrofolate reductase (DHFR) inhibitor.

The company did not respond to a request for comment on if and when they plan to lower the price of pyrimethamine.

As for Shkreli, he must forfeit more than $7.3 million worth of assets to the U.S. government as part of his sentence for the securities fraud conviction, a judge ruled early this month. That includes at least some of his stakes in Vyera.

In February, Bloomberg News quoted attorneys for Shkreli as saying that he still holds a 48% stake in the company, translating to $30 million to $50 million. Shkreli attorney Benjamin Brafman did not respond to a request for comment on how much of that could be forfeited.

Vyera is not the only company that has dramatically raised the price of a generic drug recently. Marathon Pharmaceuticals in early 2017 increased the price of Emflaza (deflazacort) — a steroid for treating childhood Duchenne muscular dystrophy — by 6,000% after being approved by the FDA to market it in the U.S. According to Forbes Magazine, consumers could buy a year’s worth of the drug from Europe or Canada for $1,000 to $2,000. Marathon’s price hike brought the yearly price tag to $89,000, Forbes reported. Company officials said Marathon would not be profitable for several years, that patients were expected to obtain insurance co-payments and that the company would give the drug to others for free.

Large price increases for drugs have not been uncommon in recent years. In August 2016, the U.S. Government Accountability Office (GAO) issued a report on Medicare Part D generic drug prices between 2010 and 2015. The analysis included 1,441 drugs. The GAO found that 315 of those drugs had at least one of what the agency called an “extraordinary price increase” of at least 100%. Combined, those drugs had a total of 351 extraordinary price increases between the first quarter of 2010 and the first quarter of 2015.

Pharmaceutical manufacturers told the GAO that prices were mainly influenced by competition. But competition, they said, could be affected by factors including raw material shortages, manufacturing challenges, company consolidation and a backlog of new drug applications in the regulatory pipeline.

In a statement sent to Infectious Disease News, FDA officials said they are working to remove obstacles to drug development and marketing with the aim of increasing price-lowering competition.

“While the FDA does not have the authority to control prices charged for marketed drug products — it is the responsibility of manufacturers, distributors and retailers, among others, to establish these prices — Commissioner Scott Gottlieb, MD, has noted that too many patients are being priced out of the medicines they need,” the statement read. “To address this very important public health issue, last year, Commissioner Gottlieb announced the Drug Competition Action Plan (DCAP) to help remove barriers to generic drug development and market entry in an effort to spur competition that results in lower drug prices for patients.”