Sitting within two seats of a sick person on an airplane — or in the rows directly behind or in front of them — could increase a passenger’s probability of getting a respiratory infection by more than 80%, researchers said.

But the probability that a sick passenger will transmit the infection to someone outside of this zone is less than 3%, according to Vicki Stover Hertzberg, PhD, professor and director of the center for nursing data science in the Nell Hodgson Woodruff School of Nursing at Emory University, and other members of the FlyHealthy Research Team.

Hertzberg and colleagues chronicled the behaviors and movements of passengers and crew on 10 transcontinental flights and used the data to create a model of influenza transmission via infectious respiratory droplets. According to their estimates, a sick crew member could infect almost five passengers per flight.

The findings were published in the Proceedings of the National Academy of Sciences. 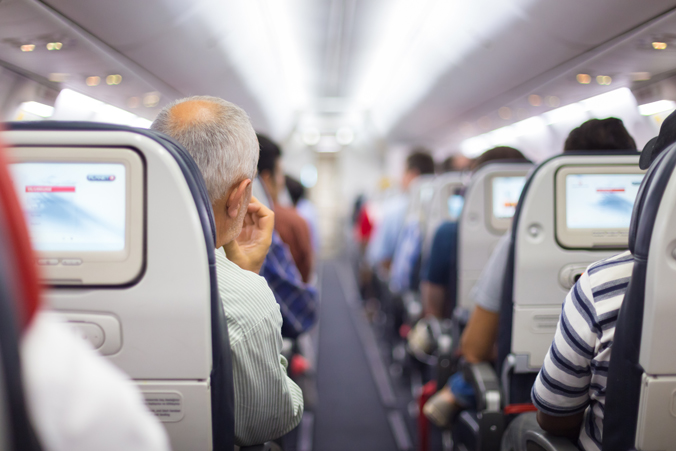 Researchers use computer models to calculate the probability that a sick person would transmit a respiratory disease to other airline passengers.

High transmission rates on planes have been documented before, including in a 1977 outbreak of influenza-like symptoms that affected 38 of 54 passengers on a commercial airliner that sat for hours on the tarmac with no ventilation. Hertzberg and colleagues used the transmission rate from this incident — 0.018 per 1 minute of contact — in their study, even though it is four times higher than the one they estimate. They said the true risk for transmission of respiratory viruses in an airplane cabin are unknown.

According to the researchers, previous models examining the effects of air travel on the spread of disease have focused on the displacement of people from one place to another, not on disease spread within a cabin. And one that did explore in-cabin transmission assumed that passengers mix randomly — a difficult assumption to believe, the researchers said.

For their study, Hertzberg and colleagues observed passengers and crew aboard single-aisle aircraft on 10 transcontinental flights in the United States and developed a model to simulate direct influenza transmission within 1 meter of an index patient seated mid-cabin in seat 14C or from an infected crew member.

They rarely saw passengers leave their seats more than once per flight — 38% never left — with trips to the lavatory being the most common reason passengers got up. Perhaps unsurprisingly, people in aisle seats had more contact with passengers who were seated more than 1 meter from them than those with middle or window seats. The duration of contact was longer for passengers in the front of the cabin.

The researchers also tested 228 samples from the air and hard surfaces on the airplanes, but none tested positive for 18 common respiratory viruses, even though eight flights occurred during influenza season. They said their estimates apply only to single-aisle airplane cabins on transcontinental flights and are not applicable to other aerosol-transmitted diseases like tuberculosis, varicella or measles.

“We caution about extrapolating these findings to short-hop domestic flights, international flights, or flights on other airlines,” they wrote. “On our study flights, half of the passengers never left their seats during flight. On short-hop flights, the amount of movement may be much less. Conversely, on longer international flights, there will be substantially more movement of passengers and crew, leading to many additional close contacts.” – by Gerard Gallagher

Disclosures: The authors report receiving support from Boeing by way of a subcontract to Georgia Tech, and one author reports being employed by Boeing.