Travelers at three US airports may have been exposed to measles

People at three United States airports may have been exposed to measles this month by infected air passengers returning from abroad, according to officials.

State health officials in New Jersey and Michigan warned air travelers that two passengers with active cases of measles landed at Newark Liberty International Airport on March 12 and Detroit Metropolitan Airport on March 6. The passenger who landed at Newark later departed for Memphis, where state health officials said a small number of people were exposed. The passenger who landed in Detroit was hospitalized and is recovering, officials said.

Similar warnings were issued in January to passengers who may have been exposed to measles at Newark and O’Hare International Airport in Chicago.

Measles is highly contagious, causing disease in approximately 90% of susceptible people who come in close contact with the virus. It can remain infectious in the air for up to 2 hours after an infected person coughs or sneezes and can cause serious complications, especially in people aged younger than 5 years and older than 20 years, according to the CDC. But the disease is also highly preventable, with two doses of the measles, mumps and rubella vaccine being about 97% effective at stopping infection. 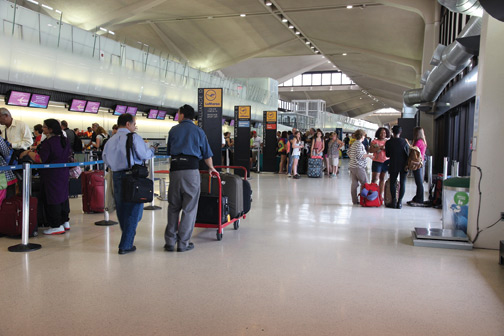 Officials said air travelers may have been exposed to measles at three U.S. airports, including Newark Liberty in New Jersey.
Source: Shutterstock.com

The U.S. has not seen an endemic case of measles since 2002 and was one of the first places to eliminate endemic transmission of the disease. However, travel-related outbreaks still occur, and measles remains common in other parts of the world, including Europe, where cases tripled in 2017.

“The problem with measles is that it’s probably the most contagious of the vaccine-preventable diseases,” Paul A. Offit, MD, director of the Vaccine Education Center and professor of pediatrics in the division of infectious diseases at The Children’s Hospital of Philadelphia, told Infectious Disease News.

According to New Jersey health officials, a young child with an infectious case of measles arrived on a flight from Brussels at Terminal B in Newark Liberty on March 12 and departed for Memphis from Terminal C. The passenger may have traveled to other areas of the airport. Officials said anyone in the airport between 12:45 p.m. and 9 p.m. may have been exposed and could develop symptoms as late as April 2. They said local health departments would notify potentially exposed passengers and urged anyone who develops symptoms to call a health care provider before going to a medical office or ER.

“Special arrangements can be made for evaluation while also protecting other patients and medical staff from possible infection,” officials said.

Health officials in Michigan said anyone in customs or baggage claim in the north terminal at Detroit Metropolitan Airport between 2 p.m. and 5 p.m. on March 6 may have been exposed to a contagious passenger returning from traveling abroad and should seek medical attention from their primary care provider if they develop symptoms, which can appear within 7 to 14 days and include high fever, cough, runny nose and red or watery eyes, according to the CDC. A patient may develop white spots in their mouth and a rash that begins as flat red spots on the face and spreads downward.

“This case underscores the importance of following vaccine recommendations and being up-to-date on vaccines,” Eden Wells, MD, MPH, chief medical executive of the Michigan Department of Health and Human Services, said in a statement. “Immunizations are the best way to protect our families and communities from the harmful, sometimes deadly consequences of vaccine-preventable diseases like measles. If you have questions about a child’s vaccination status or your own vaccination history, talk to your doctor right away to ensure your family has optimal protection.”

Tennessee Department of Health spokeswoman Shelley Walker told Infectious Disease News that the infected child who landed in Memphis from Newark “was promptly identified and isolated by health care providers and did not cause a significant risk of exposure to the disease to the public.” Walker said officials identified “a limited number of people” who were exposed to measles and have provided them with preventive care and education about the disease.

“Public health workers will remain vigilant to promptly prevent or contain any additional case, if one occurs,” she said. “At this time there is no ongoing risk of further spread of the illness.”

Health officials in Shelby County, which encompasses Memphis, said in a news release that the infected traveler was placed in isolation and that the risk of exposure in the community was “minimal.” – by Gerard Gallagher