In the past 10 years, human monkeypox cases have been reported in African countries that have seen few or no cases in several decades, presenting a serious public health challenge for area health officials and providers, according to researchers.

To confront the re-emergence of the orthopoxvirus — which has a mortality rate that can exceed 10% — WHO and the CDC are developing guidance and training to improve outbreak responses, the researchers wrote in an MMWR.

“The increase in number of monkeypox cases being reported from countries in Africa that have not reported cases in several decades and the myriad factors that affect monkeypox transmission highlight the need to update knowledge about the disease and strengthen preparedness efforts,” researcher Kara N. Durski, MPH, a technical officer with the WHO Health Emergencies Programme, and colleagues wrote. “To address gaps in knowledge and expertise in areas with endemic disease, a number of areas of work are being prioritized by WHO in collaboration with CDC.” 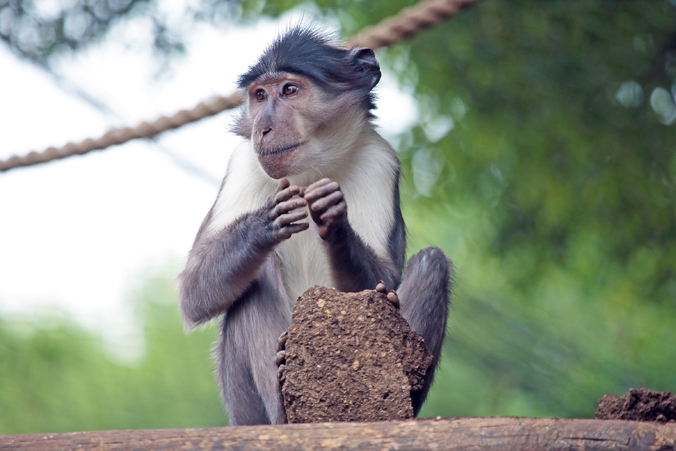 Health officials have observed an increase in the number of monkeypox cases in Africa. Although the reservoir species is currently unknown, the orthopoxvirus was previously isolated from a rope squirrel and a sooty mangabey, pictured above.
Source: Shutterstock.com

Monkeypox has a disease presentation similar to that of smallpox, with the added clinical feature of lymph node disease, according to the researchers. It can also include bacterial infections, respiratory and gastrointestinal disease, dehydration, encephalitis and eye infections. There is no specific treatment for monkeypox viral infection, and clinicians focus on symptom management. The mortality rate can reach 11% among people who have not received the smallpox vaccine, which offers cross-protection.

Nigeria, which has had more than 80 confirmed cases, is seeing the largest documented monkeypox outbreak in West Africa, the researchers said. Additionally, an outbreak among captive chimpanzees has been reported in Cameroon.

The virus has been isolated from wild animals only twice — once from a rope squirrel and once from a sooty mangabey, a type of monkey. Despite the disease’s seemingly definitive name, the reservoir species is unknown. It is presumed that contact with rainforest animals, such as through hunting, can cause transmission, according to the researchers. Human-to human transmission occurs through respiratory droplets and contact with lesions on an infected person.

The rising number of cases may be explained by people’s increased contact with animals, which may be due to climate change, deforestation and population movement. Another possible contributor is the end of smallpox vaccination following that disease’s eradication in 1980, the researchers added.

Sharing information across borders can aid surveillance efforts in the region, they advised. Overall disease surveillance in West Africa has improved following the 2014-2016 Ebola outbreak, they said.

Durski and colleagues said health care providers in many of the affected countries “lack knowledge and experience in the recognition, diagnosis and treatment of monkeypox.”

They called for a comprehensive One Health response involving human and animal health personnel, which “is necessary for disease detection and response, including wildlife surveillance and investigations into the animal reservoir/reservoirs, which require dedicated resources.” – by Joe Green