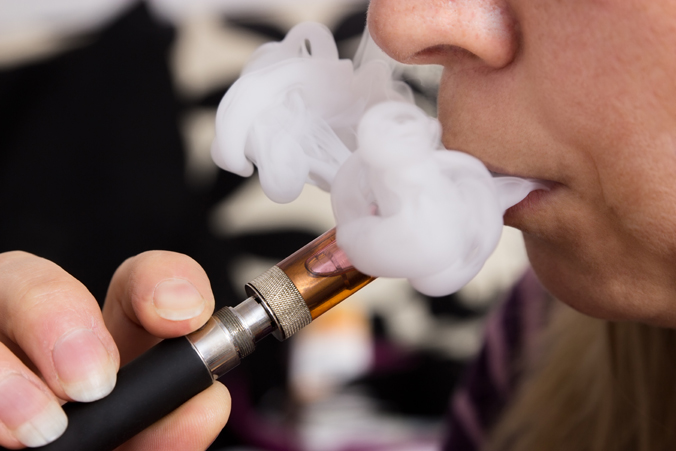 The prevalence of pneumococcal bacteria was twice as high in airway cells exposed to e-cigarette vapor than cells not exposed to vapor, according to researchers.
Source: Shutterstock.com

Researchers found evidence that e-cigarette vapor increases a receptor that pneumococci use to adhere to cells that line the airways.

Although the study enrolled only a small number of participants, Jonathan Grigg, MD, MBBS, MRCP, FRCPCH, professor of pediatric respiratory and environmental medicine at Queen Mary University of London, and colleagues said their findings suggest that people who are exposed to e-cigarette vapors are more susceptible to pneumococcal infection.

“Pneumococcal bacteria can exist in our airways without causing illness. However, in some cases, they can invade the lining cells, causing pneumonia or septicemia,” Grigg said in a press release. “We know that exposure to traditional cigarette smoke helps these bacteria stick to airway lining cells, increasing the risk of infection. We wanted to see whether or not e-cigarettes might have the same effect.”

The researchers examined the effect of e-cigarette vapors on platelet-activating factor receptors (PAFRs), which have previously shown to support pneumococci adhesion in airway cells. They assessed PAFR expression in nasal epithelial cells collected from 11 adult men before and after a 5-minute vaping session with nicotine-containing (n = 10) or nicotine-free (n = 1) e-cigarettes. The researchers then compared participants’ PAFR expression with six nonsmokers who have never vaped.

At baseline, there were no differences in PAFR expression between participants who vaped and nonvaping controls. After vaping, however, Grigg and colleagues found that both nicotine-free and nicotine-containing e-cigarettes significantly increased PAFR expression (P < .05). An in vitro analysis of human epithelial cells confirmed that nicotine-free and nicotine-containing vapors increased PAFR expression. When these cells were exposed to pneumococcal bacteria, those exposed to e-cigarette vapors had twice the number of bacteria attached to airway cells than those not exposed to vapors, the release said.

“This study adds to growing evidence that inhaling vapor has the potential to cause adverse health effects,” Grigg said. “By contrast, other aids to quitting such as patches or gum do not result in airway cells being exposed to high concentrations of potentially toxic compounds.”

Because pre-vaping PAFR expression levels did not significantly differ between participants who reported vaping at least once a week and controls, the impact of regular vaping on pneumococcal risk remains unknown, according to the researchers.

“E-cigarettes are still very new and we don’t have enough evidence on how they affect the human body. Studies like this one give us early warning of what the risks might be,” Mina Gaga, MD, PhD, president of the European Respiratory Society and medical director and head of the respiratory department at Athens Chest Hospital, said in the release. “The adverse effects of tobacco smoking are not evident immediately. They usually develop after years of exposure, so we need to do more research and follow users over time to see what the long-term health effects may be.” – by Stephanie Viguers

Disclosures: Infectious Disease News was unable to confirm relevant financial disclosures at the time of publication.

Vaping e-cigarettes is not without risk. We should be advising our patients, young and old, not to take up e-cigarettes. Not only do they increase the likelihood of someone becoming a smoker of conventional cigarettes, which cause a whole world of harm to their health, but they also have direct effects on human health. We have only begun our investigations as to the effects of e-cigarettes, and it is highly likely that more adverse effects on health will come to light.
Laura E. Crotty Alexander, MD
Associate professor of medicine, University of California at San Diego
Staff physician, VA San Diego Healthcare System
Disclosures: Alexander reports no relevant financial disclosures.
ADD TOPIC TO EMAIL ALERTS
Receive an email when new articles are posted on
Please provide your email address to receive an email when new articles are posted on .
ADDED TO EMAIL ALERTS
You've successfully added to your alerts. You will receive an email when new content is published.