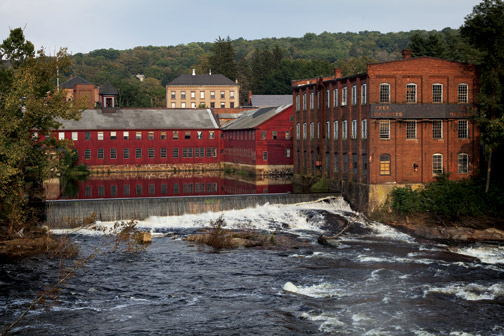 A mill complex on the Farmington River in Collinsville, Connecticut.
Source: Shutterstock.com

Researchers who identified clusters of ZIP codes in Connecticut with a higher than expected incidence of legionellosis found an unexpected relationship between infections and the natural aquatic environments where patients lived.

Living near certain river systems was associated with an increased incidence of legionellosis, which includes both Legionnaires’ disease and a milder infection known as Pontiac fever, Kelsie Cassell, MPH, a postgraduate associate at Yale School of Public Health, and colleagues reported in The Journal of Infectious Diseases.

The association was discovered as Cassell and colleagues explored the reasons behind a dramatic increase in the incidence of sporadic Legionnaires’ disease in Connecticut since 1999.

The incidence of Legionnaires’ disease has also ballooned nationwide, with the CDC saying last year that new cases quadrupled in the U.S. from 2000 to 2014.

“It’s important for physicians to consider and test for Legionella, particularly in summer months, even if a patient has no recent exposures that are more commonly thought of as being associated with the disease, such as hotel stays, travel or recent hot tub use,” Cassell told Infectious Disease News. “Attempting to culture all known cases is also very important for understanding exposure source, even if the case doesn’t seem to be part of an outbreak when they present at the hospital.”

According to Cassell and colleagues, 736 cases of community-acquired legionellosis were reported to the Connecticut health department from 1999 through 2015. Using spatial models, the researchers identified clusters of ZIP codes that had a higher than expected incidence of legionellosis. A closer analysis of the data showed that ZIP code proximity to certain rivers and watersheds was associated with an elevated risk for disease.

To be infectious, Legionella bacteria must be inhaled into the lungs. Cassell and colleagues noted several ways in which this happens, including exposure to water that has been aerosolized indoors — such as in a shower — or outside by turbid river water or even car tires. People most at risk include the elderly and patients who are immunocompromised or have other underlying health conditions.

Cassell said the results of their study could reflect multiple drivers of new cases and that river systems “are better understood as proxies for these unknown drivers.”

“We don’t believe that rivers or watersheds are directly influencing cases in these high-incidence ZIP codes, so we put forth a few hypotheses on why this association might be present,” she said. These hypotheses include “industries that use river water and indirectly create aerosols as part of the cooling process and potential contamination of residential water sources, particularly private wells that are not appropriately treated.”

“Further investigation is needed to identify the true drivers of sporadic legionellosis clusters,” she said.

Since Legionella was first discovered as the cause of a 1976 outbreak during an American Legion convention in Philadelphia, many sources of infection have been identified, most recently street-cleaning trucks. In a related editorial that was also published in The Journal of Infectious Diseases, David N. Fisman, MD, MPH, professor in the division of epidemiology at the University of Toronto’s Dalla Lana School of Public Health, described how the understanding of legionellosis has changed over the past 4 decades.

Legionella species are abundant in the environment, yet legionellosis remains an uncommon diagnosis, Fisman said. But he noted several past studies showing that increased testing led to more diagnoses, and more cases led to more testing, suggesting legionellosis is underdiagnosed. “Find and ye shall seek,” he wrote.

Fisman said it is also likely that the physical environment plays a role in incidence and said the new study paints “a convincing case” for this relationship.

“[They] have given us a compelling study supporting the importance of the physical environment as a driver of legionellosis risk in the northeastern United States,” he wrote. “Although associations between changes in the physical environment and infection risk are often readily identified in low-resource settings, there is a tendency to forget that such associations apply in high-resource settings (eg, a wealthy American state, like Connecticut), as well. This principle has important implications in an era of rapid environmental change.” – by Gerard Gallagher

Disclosure: The authors report no relevant financial disclosures. Fisman reports receiving grants from Seqirus and other support from Pfizer and GlaxoSmithKline outside the submitted work.