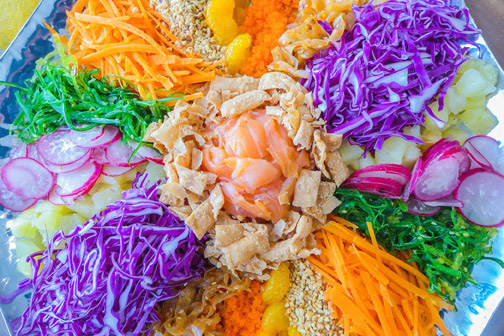 Yusheng, a type of salad typically made with raw freshwater fish, caused an outbreak of group B streptococcus in Singapore.
Source: Shutterstock.com

A new report details the investigation into a large outbreak of group B Streptococcus in Singapore that was caused by a type of raw fish salad.

The discovery of group B Streptococcus (GBS) as the cause of the outbreak led Singapore to ban the use of raw freshwater fish in ready-to-eat meals and to institute stricter rules governing the sale of ready-to-eat raw saltwater fish. The ban took effect in December 2015, several months before Chinese New Year, when yusheng is customarily eaten, authorities said.

According to Ng and colleagues, GBS is found in around 30% of healthy adults. The bacterium is a common cause of neonatal sepsis, and researchers recently estimated that it may cause almost 150,000 stillbirths and infant deaths globally each year. Ng and colleagues said the incidence of invasive GBS in adults has been increasing but that foodborne transmission had not previously been reported as a cause.

During and after the outbreak, Ng and colleagues tested fish (n = 997) and samples of fish tank water (n = 102) used for holding live freshwater fish for the presence of several pathogens. They found one clade of the GBS strain ST283 that was nearly identical to clinical strains from outbreak. They traced the strain to Malaysia but said it is probably prevalent throughout the region.

According to their report, GBS ST283 was detected all along the food chain, from ports where fish are imported, to fish markets where they are sold and food stalls that might typically serve yusheng. Ng and colleagues said people who ate yusheng were more likely to acquire GBS ST283 than those who did not.

Ng and colleagues isolated other pathogens from both freshwater and saltwater fish samples during their investigation, including Aeromonas spp., Vibrio cholerae, V. parahaemolyticus, Escherichia coli and Staphylococcus aureus. They said their findings “indicate the risk for contamination of raw freshwater fish and underscore the need for proper sourcing and handling of all fish for raw consumption.”

“Our study complements the epidemiologic findings for this outbreak and illustrates the need for public health authorities and industries to remain vigilant regarding emerging pathogens.” - by Gerard Gallagher