A mass immunization campaign that officials in Nepal introduced to combat Japanese encephalitis reduced the country’s burden of disease by at least 78%, preventing thousands of cases, according to researchers.

“Japanese encephalitis (JE) is a mosquito-borne disease that is associated with considerable morbidity and mortality in many Asian countries,” Shyam Upreti, MBBS, MPH, of the Ministry of Health in Nepal, and colleagues wrote in PLoS Neglected Tropical Diseases. “Approximately 20% to 30% of JE cases are fatal, and 30% to 50% of survivors have neuropsychiatric sequelae. There is no specific treatment for JE, but the disease is preventable by vaccination.”

Nepal first identified JE as a public health problem in the 1970s, according to the researchers. In 2006, the country’s ministry of health began implementing an immunization program in 23 districts, and those with the highest disease burden used the SA 14-14-2 JE vaccine. Each district introduced routine JE immunization among children aged 12 to 23 months within 3 years of the campaign launch.

An impact assessment conducted in 2010 demonstrated that JE incidence was 72% lower than expected had the campaigns not been implemented. In addition, the incidence of clinical acute encephalitis syndrome (AES) was 58% lower than expected. However, the researchers noted that post-introduction data were limited in some districts.

In a recent review, Upreti and colleagues used a more complete dataset, as well as data from eight additional districts where the program was introduced in 2011, to further assess the impact of the immunization campaign. The analysis included JE incidence rates from 2004 to 2014.

Overall, the researchers estimated that the immunization campaign prevented 3,011 cases of JE and 9,497 cases of AES.

“JE is a severe disease, and the [JE immunization] program’s impact likely extended to reduction of rates of JE-related morality and long-term disability,” Upreti and colleagues wrote. “These findings support continued implementation of the JE immunization program in Nepal.” – by Stephanie Viguers 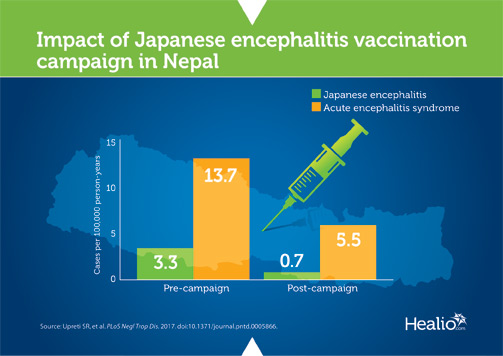