Ebola preparedness at a pediatric hospital affiliated with a biocontainment unit presented significant costs in terms of both money and time, researchers wrote in Infection Control and Hospital Epidemiology.

Transmission of the disease in health care settings is a major concern in the U.S., prompting health care leaders to designate specific hospitals to handle Ebola cases, whereas other facilities are tasked with caring for patients with possible Ebola infections until the disease can be confirmed or ruled out.

“There have been numerous descriptions of the preparations needed to become an Ebola treatment center, and the potential for external funding has been made available to assist in support of these preparedness activities.  In contrast, little has been written describing the  resource utilization necessary to develop an Ebola assessment center, and the preparedness activities at assessment hospitals including time and resources have been largely internally funded,” Kari A. Simonsen, MD, associate professor in the department of pediatrics at the University of Nebraska Medical Center, told Infectious Disease News.

“Financing of hospital preparedness is an identified area in which U.S. disaster and response efforts have lagged behind other preparedness priorities.”

The researchers surveyed the 16 members of the Ebola Task Force at Children’s Hospital & Medical Center in Omaha, Nebraska, a designated Ebola assessment center that is academically affiliated with Nebraska Biocontainment Unit, during March of 2015. Simonsen and colleagues evaluated supply costs and compensated work hours between October 1, 2014, through February 28, 2015, which researchers described as the peak period of Ebola preparedness activities.

Eleven members of the task force (69%) responded. Ebola preparedness required 3,402 hours, with 2,476 of those hours dedicated to activities such as organizing policies, running educational sessions and conducting drills, Simonsen and colleagues wrote. The task force contacted 1,474 employees within the organization for Ebola-related training, and those employees spent another 926 hours on preparedness, the researchers reported.

The institution purchased two ultraviolet C robots, as well as a dedicated decontamination shower and “modest investment” such as testing equipment, phlebotomy kits and protective equipment. Equipment expenditures cost an unbudgeted $256,484, or $62,280 annually, whereas personnel wages at an estimated mean pay rate of $35 per hour resulted in $86,660 in preparedness costs, Simonsen and colleagues reported. Training hours for non-task force staff represented an additional $32,410.

Overall Ebola preparedness cost $181,350 each year during the study period, the researchers wrote.

“The current study adds to our understanding of the specific preparedness costs for high-risk pathogens necessary for a robust national system of hospitals prepared to identify, diagnose and treat patients in the United States,” Simonsen and colleagues wrote.

The researchers added that because the hospital was affiliated with the University of Nebraska’s Biocontainment Unit, the institution presented “a unique opportunity to define costs purely attributable to assessment center capabilities.

“In order to provide safe networks of Ebola front-line, assessment, and treatment centers in the U.S., all hospital levels across the continuum require dedicated investment and support. This paper adds to the discussion about resource utilization across the care continuum for Ebola,” Simonsen told Infectious Disease News. – by Andy Polhamus 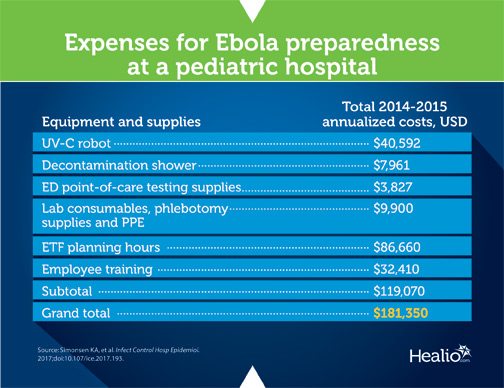