Bacteria from guinea pigs may cause severe pneumonia in people

Writing in The New England Journal of Medicine, Bart P. Ramakers, MD, PhD, an intensivist at Bernhoven hospital in Uden, Netherlands, and colleagues said the patients were hospitalized with respiratory failure caused by severe community-acquired pneumonia after being infected with an unlikely culprit, Chlamydia caviae, a gram-negative bacterium not known for its zoonotic potential outside of a single documented case of mild conjunctivitis in a patient as a result of contact with a guinea pig.

However, Ramakers and colleagues said DNA testing implied that transmission of C. caviae from guinea pigs to humans caused the Dutch cases. All three patients were successfully treated with doxycycline and recovered.

The three cases appeared over the course of approximately 3 years among unrelated patients at different hospitals in different regions, according to the report. The patients were in their early 30s at the time of infection. 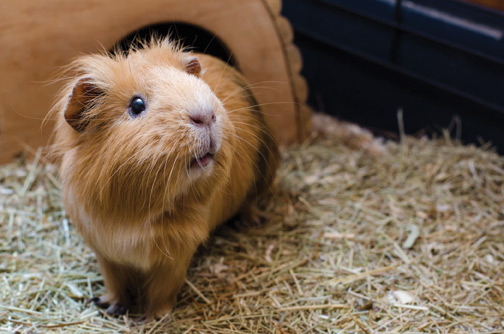 Two of the patients, a man and a woman, each owned multiple guinea pigs that had respiratory symptoms before their owners became ill. The patients were admitted to the ICU and placed on mechanical ventilation for several days. The third patient, a woman, had been exposed to guinea pigs with conjunctivitis and rhinitis while working at a veterinary clinic before she was admitted to the general ward with her symptoms.

Ramakers and colleagues said DNA specimens obtained from the respiratory tracts, serum or both in all three patients were identified as C. caviae, and that transmission between a guinea pig and one patient was confirmed through DNA testing of C. caviae isolated from the rodent via a conjunctival swab. They said no other causes of community-acquired pneumonia were found.

“Both veterinarians and physicians should be aware of the zoonotic potential of C. caviae,” Ramakers and colleagues concluded. “Although the extent to which C. caviae actually contributes to community-acquired pneumonia is unclear, awareness may help to clarify this issue.” – by Gerard Gallagher

Disclosure: One researcher reported receiving grants from the Dutch Ministry of Health, Welfare and Sport and the National Institute for Public Health and the Environment during the study.