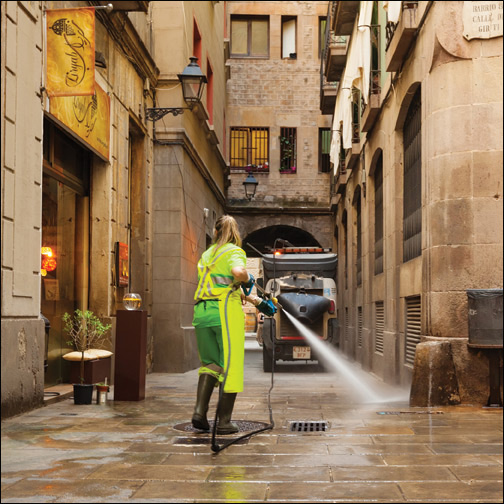 A street cleaner in Barcelona hoses down an alley.
Source: Shutterstock.com

Researchers in Spain warned that street cleaning trucks are a possible source of Legionnaires’ disease.

Writing in Emerging Infectious Diseases, Natalia Valero, MPH, a public health technician in the Barcelona Public Health Agency, and colleagues summarized their investigation into the second case of Legionnaires’ disease at the same Barcelona street cleaning company in 4 years.

According to their report, the infections were likely caused by contaminated water tanks aboard the trucks and the release of aerosolized Legionella pneumophila bacteria through high-pressure water hoses used to clean the streets.

Since the discovery of Legionnaires’ disease in 1976, experts have identified windshield washer fluid, dishwashers, hospital hot water systems, cooling towers and even water births as possible sources of the sometimes deadly lung infection. According to the CDC, the incidence of Legionnaires’ disease quadrupled in the United States between 2000 and 2014.

In the area of Flint, Michigan, a large outbreak of Legionnaires’ disease in 2014 and 2015 followed the city’s switch from the Detroit water system to the more corrosive Flint River as a primary water source. According to Valero and colleagues, Legionnaires’ disease outbreaks in Spain have been linked to cooling towers, spa pools and water distribution systems, but these were the first reported cases involving street cleaning.

“A report describing similar exposure concerned an asphalt paving machine causing an outbreak of Legionella in 2009,” they wrote. “Like the trucks in this study, this was a mobile source, and the use of untreated water had also contributed to tank pollution. Although some studies have associated [Legionnaires’ disease] with occupations such as gardening and professional driving, no studies have related [it] to street cleaning.”

Legionella spp. are ubiquitous in freshwater aquatic habitats and can multiply in artificial water systems if the water is warm, stagnant, poorly maintained or not disinfected properly, Valero and colleagues wrote. To be infectious, Legionella bacteria must be inhaled into the lungs.

This is likely what happened to the street cleaner in Barcelona, a man aged 58 years who smoked and who was diagnosed with Legionnaires’ disease in August 2015, sparking an investigation by the Barcelona Public Health Agency that identified the water trucks as a possible source of his infection.

According to the report by Valero and colleagues, the water tanks aboard the street cleaning trucks contained internal foam linings used to steady the truck while in motion that were never cleaned. The tanks were filled each day with either untreated groundwater or drinking water and were emptied each night, but the foam linings remained sodden.

The tanks were disinfected once a year for 2 hours with a chlorine-based solution and the hoses were replaced relatively often because of wear and tear, but Valero and colleagues said the foam linings were never replaced, acting as a reservoir for L. pneumophila. They detected strains of the bacteria in two of the four trucks used recently by the man but not in the groundwater tank where the trucks were usually filled or in the hoses used to clean the streets.

The cleaning procedure described by Spanish law for the treatment of hot water systems was not effective at eliminating L. pneumophila from the water trucks, Valero and colleagues reported. They said the man did not use a protective facemask, but that all street cleaning workers are now required to wear personal protective equipment during work-related exposure. Moreover, they said the internal foam in the truck tanks was removed and stricter water management and control measures were instituted.

Although the environmental and clinical strains of L. pneumophila could not be compared in this case because the patient was diagnosed using a urinary antigen test and not a respiratory culture, Valero and colleagues said he was “probably” exposed via aerosolized droplets of water.

“The identification of exposure in sporadic cases provides a good opportunity to enhance understanding of reservoirs for Legionella in relatively rare sources,” they wrote. – by Gerard Gallagher