Health officials are investigating an outbreak of Salmonella infections caused by pet turtles.

According to the CDC, 37 people in 13 states were infected with the outbreak strain of S. Agbeni between March 1 and Aug. 3 this year, including 12 children aged 5 years or younger. At least 16 people have been hospitalized, but no deaths have been reported.

Salmonella infections cause diarrhea, fever and abdominal cramps within 12 to 72 hours in most affected patients, and the illness usually lasts 4 to 7 days, although severe cases may require hospitalization, according to the CDC. The agency said it expected the outbreak to continue because customers might not be aware of the risk of Salmonella from small turtles.

“Epidemiologic and laboratory findings link the outbreak of human Salmonella Agbeni infections to contact with turtles or their environments, such as water from a turtle habitat,” the agency said in an outbreak advisory issued today. 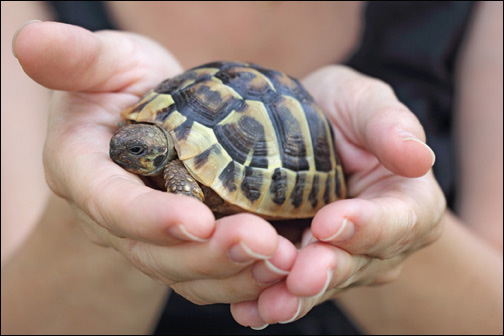 Dozens of people in 13 states have contracted Salmonella from pet turtles.
Source: Shutterstock.com

Children are at the highest risk for contracting a Salmonella infection from turtles, according to researchers. All turtles can carry Salmonella, but it may be a particular risk in smaller or illicitly obtained turtles. Last year, the CDC linked four recent multistate Salmonella outbreaks to small turtles or their environments, and a multistate outbreak in 2014 was caused by illegally distributed pet turtles.

Since 1975, the FDA has banned the sale and distribution of turtles with shells shorter than 4 inches because they are often linked to Salmonella infections, especially in children, according to the CDC.

The agency advises against buying small turtles or giving them as gifts. It said six people in the current outbreak reported buying turtles from a flea market or street vendor, or getting one as a gift. Fifteen people reported contact with turtles or their environments before becoming ill.

According to the CDC, turtles and other reptiles or amphibians can contaminate households with Salmonella germs from their feces, so it is not necessary to touch or handle them to become infected.

Among other things, the CDC advises that people wash their hands thoroughly after handling reptiles and amphibians and anything in the areas where they live or roam. Some people should not touch or handle them at all, according to the agency, including children aged younger than 5 years, people with weak immune systems and adults aged older than age 65. – by Gerard Gallagher