Despite an overall decline in MRSA infections, hospitalizations from serious, invasive MRSA-related infections have not significantly changed, study data showed.

“The emergence of community-associated MRSA, notably the USA300 strain, in the late 1990s led to a large increase in the number of hospitalizations for MRSA, driven mainly by skin and soft tissue infections,” Ramanan Laxminarayan, PhD, MPH, of the Center for Disease Dynamics, Economics and Policy, and colleagues wrote. “Recent reports suggest that overall rates of invasive MRSA infections have dropped significantly from a peak in 2005. However, national trends in MRSA-related hospitalizations have not been reported since 2009.”

Laxminarayan and colleagues used data from the National Inpatient Survey to determine the rates of hospitalizations related to Staphylococcus aureus and MRSA between 2010 and 2014.

The researchers pointed out that their results contrasted with reports from the CDC Active Bacterial Core surveillance (ABCs) system and the National Healthcare Safety Network (NHSN), which indicated that the incidences of invasive MRSA and hospital-onset MRSA bacteremia were falling.

“Differences may be because NHSN measures hospital-onset infections and not community-associated infections, and increased screening may have led to changes in onset classification without changing rates of infection,” Laxminarayan and colleagues wrote. “The study populations differ for the ABCs as well, which includes outpatient settings, while this study only included hospitalized patients. The decrease in rates of noninvasive MRSA hospitalizations may be attributable to a combination of efforts to combat this public health crisis. However, because the decrease was largely confined to community-associated infections, these changes may instead reflect the natural waning of an epidemic."

Laxminarayan and colleagues concluded by noting that MRSA rates remain higher in the U.S. than in many other developed nations, particularly invasive pneumonia and sepsis.

“Future policies should focus on increasing infection prevention efforts, which have demonstrated efficacy in reducing long-term incidence of MRSA at the hospital level, and would help avoid all S. aureus infection,” the researchers wrote. – by Andy Polhamus

Disclosure: Laxminarayan reports support from Princeton University's Center for Health and Wellbeing Program on U.S. Health Policy. Please see the study for list of all other authors’ relevant financial disclosures. 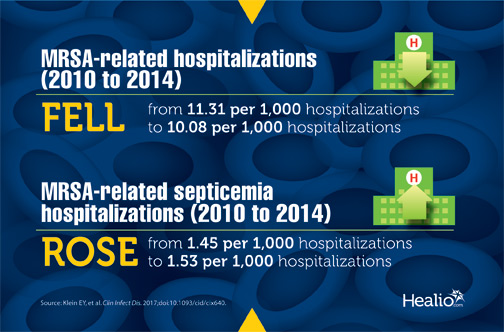