Ebola virus RNA was detected in 11 of 137 disease survivors who donated semen over 2 years after disease onset, according to recent findings. However, exactly why viral RNA persists, and whether its detection represents the presence of infectious virus, remains unclear.

“The prolonged presence of potentially infectious Ebola virus in the male genital tract has implications for both personal and public health,” William A. Fischer II, MD, assistant professor of medicine at the University of North Carolina at Chapel Hill, and colleagues wrote in Open Forum Infectious Diseases. “The reported propositions of men with detectable viral RNA in their genital fluid later in the convalescent course have varied widely. There are even fewer data regarding the presence of [Ebola virus (EBOV)] RNA in the semen of [Ebola virus disease (EVD)] survivors further out from their disease onset.” 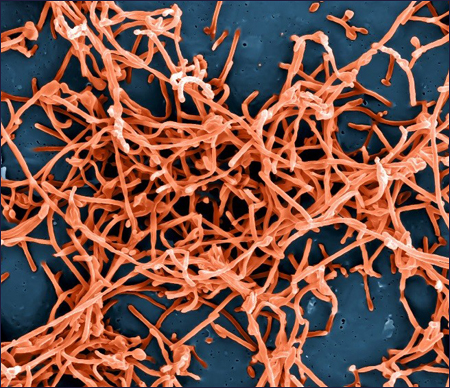 Between June 2016 and January 2017, researchers examined the prevalence of EBOV RNA in the semen of 149 EVD survivors more than 2 years after onset of acute illness. They recruited men aged 18 years and older participating in a study of EVD survivors conducted at the Eternal Love Winning Africa Hospital in Liberia. Every 3 months, the investigators performed physical and clinical examination and tested collected specimens using an assay that can detect EBOV RNA in semen. They compared demographics, time from Ebola Treatment Unit (ETU) discharge to enrollment and reports of new onset of symptoms between participants with evidence of EBOV RNA and those without.

Their analysis showed that EBOV RNA was detectable in semen for up to 965 days from symptom onset. Of the 149 men who donated semen, 13 had detectable EBOV RNA; of the 137 men who provided semen specimen more than 2 years since EVD onset, 11 had detectable EBOV RNA. In eight of 13 patients who had a positive result, researchers observed that the detection of EBOV RNA was sporadic, with a detectable PCR result preceded by an undetectable result. Notably, men with detectable EBOV RNA were significantly older (median age, 41.8 vs. 31.2 years; P = .0004) and more likely to experience issues with vision and fatigue compared with men whose semen tested negative. There was no significant variance in the time from ETU discharge to first semen donation and other symptoms between men with EBOV RNA and men who tested negative.

“This unexpected and prolonged presence of EBOV RNA in the male genital tract should prompt discussion of revised approaches to the prevention of sexual transmission of Ebola and encourage novel investigations to determine the mechanisms by which this virus remains in this and other compartments, its infectiousness, and strategies for its elimination,” Fischer and colleagues wrote. “Such data are necessary to inform public health recommendations that are used to counsel thousands of EVD survivors.” – by Savannah Demko