A simulation showing the functions of an HIV capsid, or protein container, may provide ideas on how to fight the virus, according to researchers. 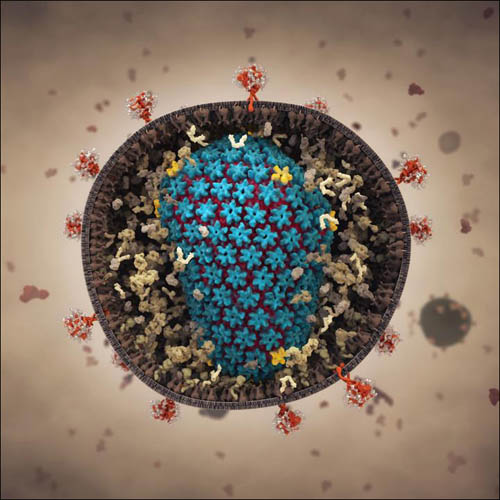 A representation of an HIV capsid — the blue portion — which protects the virus and takes it to a host cell’s nucleus, where infection occurs.
Source: Juan Perilla, MD

They used a supercomputer to simulate 1.2 microseconds of capsid activity, thereby learning more about how it works, they wrote in Nature Communications.

“We are learning the details of the HIV capsid system, not just the structure, but also how it changes its environment and responds to its environment,” researcher Juan R. Perilla, PhD, a biophysicist with the University of Illinois, said in a news release.

The research team created the simulation using the United States Department of Energy Titan supercomputer. It analyzed the data from Blue Waters, another supercomputer located at the National Center for Supercomputing Applications at the University of Illinois.

Experts already knew the HIV capsid is made of about 1,300 proteins and 4 million atoms. It holds the virus’ genetic material and carries the virus to a host cell’s nucleus to infect it.

From their simulation, the researchers learned more about the capsid, including characteristics that likely help it find the host cell’s nucleus, Perilla said in the news release. Portions of the capsid oscillate at different frequencies, likely moving information within itself, he added.

Perilla and colleagues also learned that ions enter and exit pores in the capsid. Negative ions gather on the positively charged inside surface, and positive ions are drawn to the negatively charged outside surface. That may be a key to stopping a capsid in its tracks, the researchers said.

“If you can break this electrostatic balance that the capsid is trying to keep together, you may be able to force it to burst prematurely,” Perilla explained.

In addition, the researchers found that intracapsid stress occurs in patterns and aligns in areas shown to be most prone to bursting. That and other observations show possible weaknesses that can be used to create new drugs aimed at destroying the capsid, Perilla said. – by Joe Green