Antimicrobial resistance over 3 decades: Moving toward a post-antibiotic era

To mark our 30th anniversary, Infectious Disease News will be examining some of the infectious diseases that have defined and changed the field over the past 3 decades.

In November 2015, researchers from China reported the emergence of a gene conferring resistance to colistin, named mcr-1. This report was followed, less than a year later, by the first incidence of an mcr-1–positive infection — Escherichia coli — in a U.S. patient.

Colistin, which became available for clinical use in the 1960s, is known as an antibiotic of last resort, according to Debra A. Goff, PharmD, FCCP, clinical associate professor, infectious disease specialist and founding member of the antimicrobial stewardship program at The Ohio State University Wexner Medical Center.

“We hadn’t used colistin in decades because it’s so toxic,” Goff said. “However, in the early 2000s, most of the drugs for gram-negative infections had developed resistance, and we were literally out of antibiotics. I had never used colistin in my career — and I had practiced for 20 years at that point — but I had to learn how to.”

The recent history of antibiotic resistance began in the late 1980s with the emergence of vancomycin-resistant enterococci, or VRE, and an increase in MRSA infections.

“The 1970s and 1980s were a period of growth and development in antibiotics, but we started to see resistance in the 1980s to, importantly, even a drug like vancomycin,” Helen W. Boucher, MD, FACP, FIDSA, director of the infectious diseases fellowship program and professor of medicine at Tufts Medical Center, said in an interview.

Thirty years later, resistance has developed to nearly all antibiotics. The latest development — resistance to colistin — affects “one of the last lines of defense against resistant gram-negative bacteria,” according to Boucher, who is also treasurer of the Infectious Diseases Society of America.

Currently, infections caused by the “ESKAPE pathogens” — which include Enterococcus faecium, Staphylococcus aureus, Klebsiella pneumoniae, Acinetobacter baumannii, Pseudomonas aeruginosa and Enterobacter spp. — are the biggest concerns. These gram-negative bacteria elude the mechanisms of antimicrobial agents, and some are resistant to most antibiotics in current use. Resistance to the antibiotics used to treat gonorrhea, Clostridium difficile and tuberculosis represent additional challenges to patient care.

“The single biggest concern in hospital-based infectious diseases is carbapenem-resistant gram-negative bacteria,” Infectious Disease News Editorial Board member Keith S. Kaye, MD, MPH, professor of internal medicine and director of clinical research in the division of infectious diseases at the University of Michigan Medical School, said in an interview. “These bacteria are often multidrug-resistant to other classes of antibiotics, and they severely limit therapeutic options. Outside of the hospital, Neisseria gonorrhoeae has become progressively resistant to antibiotics, to the point that we don’t really have reliable oral options. We’re even seeing some resistance to our intravenous options.”

However, multiple approaches are being used to halt this growing problem. Infection prevention is one of the most important strategies; antimicrobial stewardship programs and education also have a critical role.

Between 1986 and 1998, P. aeruginosa was identified by Lister and colleagues as the second-leading cause of nosocomial pneumonia, the third most common cause of urinary tract infections (UTIs), the fourth most commonly isolated pathogen in surgical site infections and the seventh most frequent cause of bloodstream infections. Those same researchers determined that, in the mid-1990s, the pathogen was responsible for 21% of pneumonias; 10% of UTIs; 3% of bloodstream infections; and 13% of eye, ear, nose and throat infections in ICUs in the U.S. It was also identified as the second most frequently isolated organism in ICU–acquired infections in a European study.

Other ESKAPE pathogens — K. pneumoniae, A. baumannii and Enterobacter spp. — have become more problematic in recent years, according to multiple reports. Illnesses caused by community-acquired A. baumannii, including pneumonia and bloodstream infections, were reported with increasing frequency starting in the early 2000s by researchers from Germany, Hong Kong, the U.S. and France. K. pneumoniae and Enterobacter spp., which are both members of the Enterobacteriaceae family, are particularly concerning because of growing resistance to carbapenem antibiotics, which began to emerge with increasing frequency about a decade ago.

Most recently, in January, a woman was hospitalized in Nevada following an extended trip to India, where she had been hospitalized on several occasions for a broken leg and related infections. The U.S. hospitalization revealed carbapenem-resistant Enterobacteriaceae, or CRE, that was resistant to all existing antimicrobial agents; the patient died of septic shock less than a month after her admission.

“Breaking your leg should be something that’s easily fixed, with a good outcome, but this woman died because we had nothing — including colistin — to treat her infection,” Goff said.

C. difficile is an infection that is caused, in part, by antibiotic overuse, so resistance to treatments for the condition have always been a concern; between 2003 and 2004, however, a new strain of the illness led to an uptick in resistance. A 10-year retrospective review by Halabi and colleagues demonstrated a 47% increase between 2001 to 2005 and 2006 to 2010 in the incidence of C. difficile among hospitalized patients.

An updated version of the CDC’s Sexually Transmitted Diseases Treatment Guidelines released in 2012 shows that resistance to the fluoroquinolone class of antibiotics, used in the treatment of gonorrhea, emerged in the 1990s and 2000s, prompting the agency to stop endorsing their use for this disease. This left the cephalosporin class of antibiotics as the only treatment option recommended for gonorrhea. However, according to data from the CDC’s Gonococcal Isolates Surveillance Project, or GISP, ceftriaxone resistance was identified in Japan, Spain and France by 2009. By 2014, resistance to penicillin, tetracycline or ciprofloxacin, and reduced susceptibility to cefixime, ceftriaxone or azithromycin, was reported among 38.2% of all isolates gathered through the GISP. 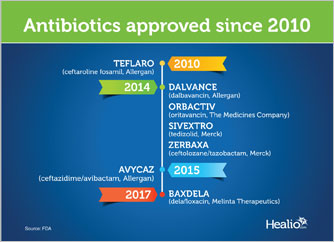 “The question I get most often ... is whether we’re in a post-antibiotic era,” Boucher said. “It has not become a widespread problem, at least not in the United States. There are some places in Western Europe, India and elsewhere where some might argue that we have entered the post-antibiotic era, but that’s what we don’t want to see happen on a wider scale.”

‘Everyone can contribute to the solution’

In combatting these issues, infection prevention is critical, according to the clinicians who spoke with Infectious Diseases News. Research published in the International Journal of Environmental Research and Public Health demonstrated that effective sanitation, food and water safety, vaccination and proper handwashing techniques all play a role in prevention; the same research shows that hospital disinfection and the hand hygiene of health care workers are particularly important. A review on antimicrobial resistance published in 2016 by researchers from the United Kingdom also demonstrates that infection prevention decreases the likelihood of infections that would require antibiotics and, therefore, opportunities for resistance.

“First things first: If we can prevent an infection, that’s best,” Boucher said.

Antimicrobial stewardship programs, or ASPs, are another critical strategy. These programs use formulary restrictions, provider education, guidelines and audits of prescribing habits to promote more effective, appropriate use of antibiotics. ASPs have been shown to decrease unnecessary prescribing and resistant infections.

Efforts on the national and international levels are also making a difference. The “10 x ’20 Initiative,” launched by the Infectious Diseases Society of America in 2010, aims to develop — and approve — 10 new systemic antibiotics by 2020; since 2010, seven new antibiotics have been approved, according to data provided to Infectious Disease News by the FDA. The 21st Century Cures Act, enacted in 2016, created a new FDA approval pathway for antibiotics and antifungals that treat critical or life-threatening infections in patients with unmet medical needs. Most recently, in February, WHO released its first-ever list of antibiotic-resistant “priority pathogens.” The list, which specifically highlights the danger posed by gram-negative bacteria, is intended to encourage research and development of new antibiotics.

“There have been a lot of positive developments in terms of recognizing antimicrobial resistance that have inspired and promoted more activity in research and development,” Kaye said. “But I worry about antibiotic resistance not being the flavor of the month, or the flavor of the year, so to speak, and losing some of the funding and interest that we’ve achieved.”

This is where education and behavior change are critical, according to Goff.