CDC: Incidence of influenza-like illnesses, deaths remain elevated in US

Despite a decrease in influenza activity in the United States, the number of outpatient visits and deaths attributed to pneumonia and influenza remain high, according to a recent report prepared by CDC’s Influenza Division.

Researchers antigenically characterized 547 influenza A(H3N2) viruses, 176 influenza A(H1N1)pdm09 viruses and 346 influenza B viruses collected since Oct. 1. They found that 97.8% of influenza A(H3N2) viruses, 92.2% of influenza B/Victoria-lineage viruses, and all the influenza A(H1N1)pdm09 and influenza B/Yamagata-lineage viruses were similar to components of this season’s Northern Hemisphere vaccine recommendations. Susceptibility testing for antiviral medications, including Tamiflu (oseltamivir, Roche), Relenza (zanamivir, GlaxoSmithKline) and Rapivab (peramivir, BioCryst Pharmaceuticals) showed that all viruses tested were sensitive to all three antivirals.

The CDC reported that 3.2% of outpatient visits from March 12 to March 18 were due to influenza-like illnesses (ILI), which is above the national baseline of 2.2%. Regions experiencing the most ILI activity included Alabama, Georgia, Indiana, Kansas, Kentucky, Louisiana, Maryland, Minnesota, Mississippi, Oklahoma, South Carolina and Virginia. 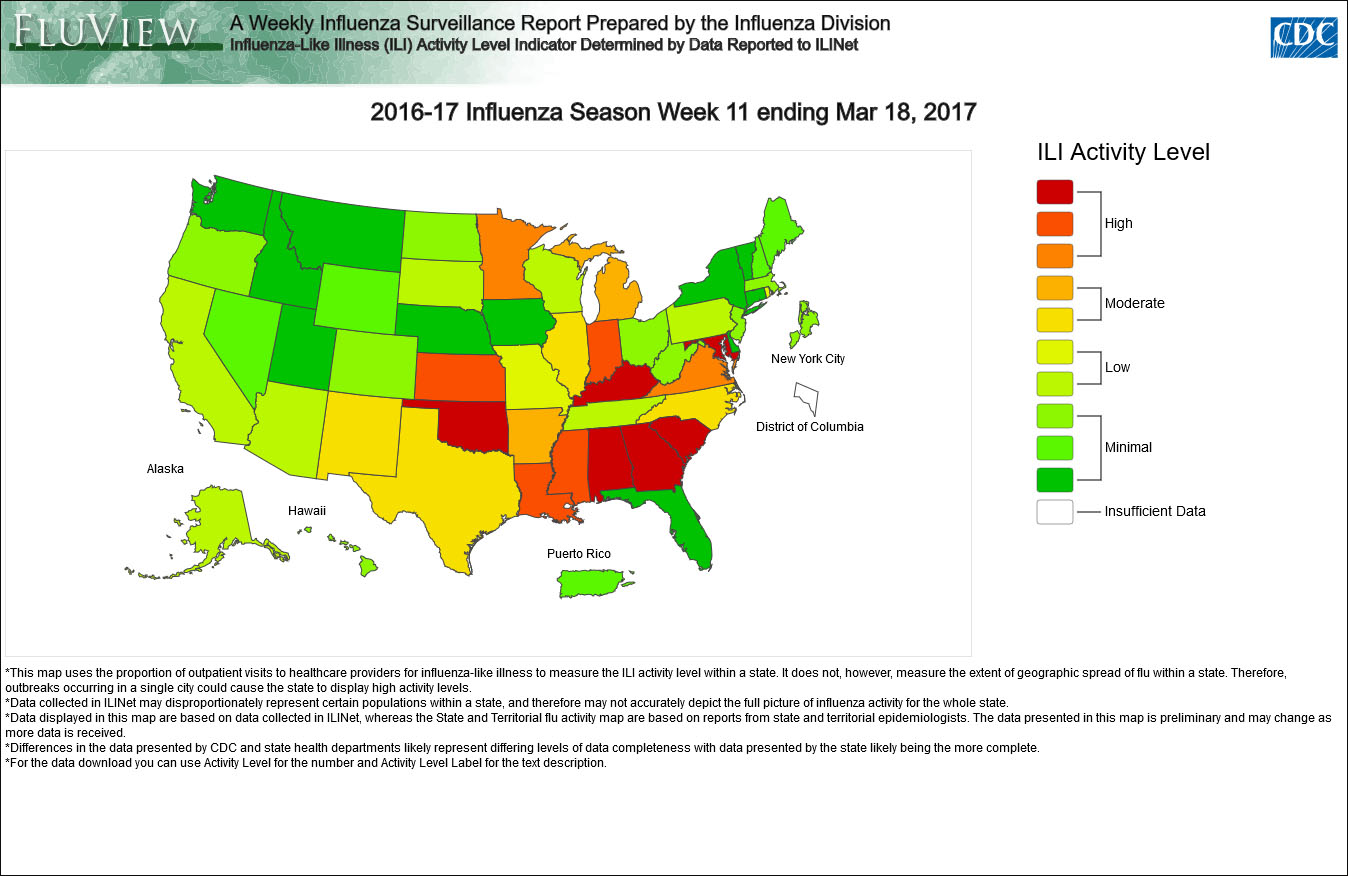 Additional data from the National Center for Health Statistics showed that 7.8% of deaths occurring the week ending March 4, 2017 were attributed to pneumonia and influenza, which is above the epidemic threshold of 7.5% for this week. Overall this season, 55 influenza-associated deaths have occurred in children.

Also in the report, the CDC listed WHO’s recommendations for the 2017-2018 Northern Hemisphere influenza vaccine composition. The organization recommends that trivalent vaccines contain an A/Michigan/45/2015 (H1N1)pdm09-like virus, an A/Hong Kong/4801/2014 (H3N2)-like virus, and a B/Brisbane/60/2008-like (B/Victoria lineage) virus. For quadrivalent vaccines, which have two influenza B viruses, WHO recommends including viruses in the trivalent vaccines as well as a B/Phuket/3073/2013-like (B/Yamagata lineage) virus.

“This is the same recommendation made for the 2017 Southern Hemisphere vaccines, but it does represent an update to the influenza A(H1N1) component recommended for 2016-2017 Northern Hemisphere influenza vaccines,” the report said. “These vaccine recommendations were based on several factors, including global influenza virologic and epidemiologic surveillance, genetic characterization, antigenic characterization, antiviral resistance, and the candidate vaccine viruses that are available for production.” – by Stephanie Viguers