When President Donald J. Trump nominated Scott Gottlieb, MD, to be the next FDA commissioner, the announcement was met with relief by some that the agency’s scientific rigor would not be undermined but also warnings about Gottlieb’s deep ties to the pharmaceutical industry.

Gottlieb, a past deputy commissioner at the FDA, has been a paid consultant for several pharmaceutical companies, reportedly accepting close to a half million dollars for his work.

Trump was said to also be considering former HHS official Jim O’Neill, an advocate of speeding up the FDA’s drug approval process by eliminating the efficacy requirement. This, coupled with Trump’s criticism of the FDA in other matters, caused concern among some observers who worried that decades-old safeguards in place at an agency with sweeping regulatory responsibilities would be undone in an ideological takeover.

But Susan F. Wood, PhD, associate professor of health policy and management in the Milken Institute School of Public Health at George Washington University and former FDA assistant commissioner for women’s health, said the selection of Gottlieb raises different concerns about how the FDA will be run.

“Is it going to be captured by the industry in a way that it hasn’t been in the past? That brings its own challenges,” Wood told Infectious Disease News.

Gottlieb, while reportedly in favor of lowering drug costs by speeding up the approval process for generics, has not shown any signs that he wants to eliminate the efficacy standard for new drugs, according to Bassil I. Dahiyat, PhD, president and chief executive of Xencor Inc., a biopharmaceutical company. In an interview, Dahiyat called the selection of Gottlieb over O’Neill “a sigh of relief,” saying the drug industry benefits from an approval process that is based in science and not ideology. 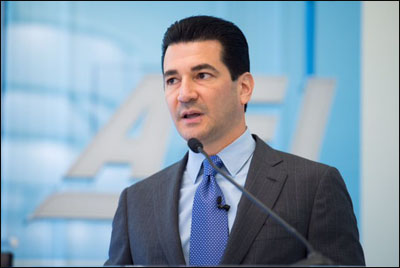 “You need to have somebody who is highly aware of and experienced and knowledgeable of medical science and drug development, what that really means and how that interplays with regulation,” Dahiyat said. “I think that experience gives you the perspective and knowledge to make the right decisions. I think coming at it with an ideological view about how things ought to be done is very unlikely to reflect the reality on the ground.”

Gottlieb is currently a resident fellow at the conservative American Enterprise Institute, where he focuses on the FDA, CMS, health care reform, and political and clinical trends in medicine, according to his biography on the organization’s website. He is a partner in the venture capital firm New Enterprise Associates, where his specialty is health care investments, according to the company. Gottlieb is also a clinical assistant professor at NYU School of Medicine and a columnist and blogger at Forbes magazine, where he has written about the FDA.

He held several positions at the FDA between 2003 and 2007, including deputy commissioner for medical and scientific affairs. He worked for a time under former FDA commissioner Mark McClellan, MD, PhD, who ran the agency during President George W. Bush’s first term. McClellan told The New York Times he thinks Gottlieb is “very well qualified for the job and would make an excellent commissioner.”

Gottlieb’s industry roots run deeper than the most recent FDA commissioner, Robert M. Califf, MD, whose nomination was stalled because of such concerns. And there already have been calls for the Senate to reject Gottlieb’s nomination, including from Michael Carome, MD, director of the health research group at Citizen’s Health, a progressive consumer advocacy group. Carome said in a statement that Gottlieb “is entangled in an unprecedented web of Big Pharma ties” and has advocated for “dangerous deregulatory approaches to the review process for new medicines.”

“In exchange for getting medications to the market faster, Gottlieb is willing to accept a greater degree of uncertainty about safety and effectiveness at the time of approval. He also has favored looser restrictions on off-label promotion,” Carome said. “Gottlieb’s appointment would accelerate a decades-long trend in which agency leadership too often makes decisions that are aligned more with the interests of industry than those of patients.”

“He brings with him the perspective of someone who is very sympathetic to industry concerns,” Wood said.

Califf was picked by President Barack Obama in September 2015 but served only about 8 months in the job after facing challenges from several senators, including then-presidential candidate Bernie Sanders (I-Vt.), who blocked the nomination over worries about rising drug prices and what he called Califf’s “extensive ties to the pharmaceutical industry.”

Dahiyat said Gottlieb’s experience and knowledge of drug development from the regulatory side would be valuable for an incoming FDA commissioner and criticized the notion that the agency needs fundamental, bedrock changes.

“Ignorance of the detail and the practical aspects of what it really takes is the problem. I think there’s this belief that the official agency or body is intrinsically wrong and bad. I don’t think this is true,” he said. “I think we dodged a bullet [by getting a] professional, FDA insider with experience.”

Califf stepped down in January when Trump was inaugurated. Stephen Ostroff, MD, has been serving as the acting commissioner after overseeing the FDA’s food and animal health activities for about 8 months.

Vaccine safety is one area where Gottlieb has shown clear disagreement with Trump, who has repeated the false claim that vaccines can cause autism. In a 2015 interview with CNBC, Gottlieb said the autism myth had been “thoroughly debunked.”

“We’re slowly picking apart the safety net that protected our own childhood,” Gottlieb said. “We don’t need more research. At some point, enough is enough. It’s fine to continue to collect data, but at some point, you have to take ‘no’ for an answer.” – by Gerard Gallagher

Disclosure: Dahiyat reports being employed by and compensated by Xencor. Wood reports no relevant financial disclosures.