Nontuberculous mycobacteria, or NTM, also called mycobacteria other than tuberculosis, traditionally have been categorized by their rate of growth and pigment production in vitro using the Runyon classification. However, with the advent of genetic techniques, species-specific identification by sequencing a number of target genes, including the 16S ribosomal RNA gene, has led to many new species of NTM being described. Currently, there are more than 125 NTM species. NTM are classified into rapidly growing mycobacteria and slow growers.

Rapid-growing mycobacteria produce nonpigmented mature colonies on agar plates in less than 7 days of incubation and include Mycobacterium fortuitum and the M. chelonae-abscessus group.

Slow-growing NTM require more than 7 days to produce mature growth in vitro and are further divided based on pigment production into three major groups: nonchromogens, photochromogens and scotochromogens.

Slow-growing, photochromogenic species (that is, produce pigment when grown in the light) include M. kansasii, M. marinum and M. simiae. M. simiae can cause lung infection, osteomyelitis, peritonitis, pyelonephritis and disseminated infection in immunocompromised patients.

Slow-growing, scotochromogenic species (that is, produce pigment when grown in the dark and in the light) include M. scrofulaceum, usually causing cervical lymphadenitis in children but also rarely causing extranodal infection.

NTM are widely distributed in the environment and are commonly isolated from soil and water, including both natural and treated water sources. NTM form biofilms can survive in water systems in residential, office and health care facilities and resist chlorination. NTM can survive and grow in protozoa, their intracellular location protecting them from an otherwise hostile environment. Commercial potting soils have high NTM numbers (1 million per g) due to the inclusion of peat, and samples of patients’ potting soils yielded NTM that were identical by DNA fingerprint to the NTM isolated from their lungs. 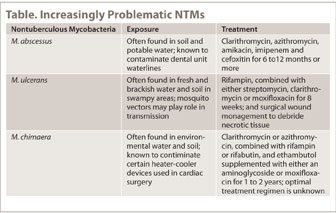 Most NTM infections are acquired from exposure to environmental sources; person-to-person transmission is rare. NTM cause skin and soft tissue, lung, lymph node, bone and joint, wound and disseminated infections.

Infections caused by M. abscessus, M. ulcerans and M. chimaera are emphasized in the following sections (Table), because they in particular have been emerging problems in the past few years.

Drugs with the best in vitro activity against the M. abscessus complex include clarithromycin, azithromycin, amikacin, imipenem and cefoxitin. The total duration of therapy usually recommended is 6 to 12 months or more. Surgical resection in patients with areas of focal severe bronchiectasis and/or cavitary pulmonary disease, aimed at decreasing the mycobacterial load and removing a reservoir of infection, when combined with multidrug antibiotic therapy, has been reported to result in more prolonged microbiologic responses.

Studies have demonstrated that dental unit waterlines (DUWLs) can become colonized with NTM, including M. abscessus, which replicate on the interior surfaces of the DUWLs to form a biofilm. The biofilm serves as a reservoir that can seed free-floating (ie, planktonic) microorganisms in water used for dental treatment. Recently, outbreaks of M. abscessus dental infections have been reported in Georgia in 2015 and in California in 2016. M. abscessus-contaminated water in DUWLs used during pulpotomies (root canal procedures) in children introduced M. abscessus into the tooth’s pulp chamber and root canal during irrigation. Pulpotomy removes decay and the diseased pulp to preserve a deciduous tooth. The illness in these children had a prolonged incubation period of weeks to many months. All affected children had severe infection requiring hospitalization, and many required surgical excision of infected tissue. Some patients developed cervical or submandibular lymphadenitis, and some had multiple small pulmonary nodules on chest CT scan. The pulmonary involvement could have been due to bloodstream dissemination or either microaspiration of water or inhalation of aerosols of water from the M. abscessus-contaminated DUWLs.

Studies have demonstrated that flushing and purging of DUWLs does not reliably improve the quality of water used during dental treatment down to less than 500 CFU/ml. The CDC’s Guidelines for Infection Control in Dental Health-Care Settings — 2003 has recommended implementing infection control strategies such as self-contained water systems, chemical treatment regimens, in-line microfilters, water purifiers and different combinations of these treatments. Monitoring of dental unit water is an important component of a dental treatment water quality program.

Buruli ulcer, which is caused by M. ulcerans, is the third most common mycobacterial disease worldwide after leprosy and tuberculosis. Buruli ulcer has been reported in more than 30 countries, mainly those with tropical or subtropical wetlands, and is endemic in many foci in sub-Saharan Africa, which report the majority of cases.

However, for unknown reasons, the incidence of what is usually thought to be a tropical disease has increased dramatically in a place with a temperate climate — on the coast of Southeastern Australia — where the disease is also known as the Bairnsdale ulcer.

M. ulcerans is likely acquired from the environment and is not believed to be transmitted from person to person, but the exact mode of transmission is unknown and may vary by geographic region. M. ulcerans has been identified in fresh and brackish water and soil in swampy areas. Abrasions of the skin after contact with contaminated water, soil or vegetation are likely routes of entry. Vectors, in particular aquatic insects and mosquitoes, may also play a role in some locations. In Southeastern Australia, mosquitos may be a vector, and opossums, which have laboratory-confirmed M. ulcerans skin lesions and/or M. ulcerans PCR–positive feces, may be a reservoir.

Buruli ulcer, which initially presents as a nodule or painless indurated area on the legs or arms, progresses without pain or fever with the subsequent formation of large ulcers because of extensive destruction of skin and soft tissue that sometimes involves adjacent bone. When neglected lesions heal, scarring may cause restricted movement of limbs and permanent disabilities.

The diagnosis can be confirmed by PCR and culture. Although very slow growing (requiring 6-8 weeks of incubation), M. ulcerans can be cultured from human lesions on media used for mycobacteria, provided the incubation temperature is kept between 29°C and 33°C (84.2-91.4°F). Genotyping of the strain can provide information about the geographical location where the patient was infected. The organism produces a unique toxin — mycolactone, which causes tissue damage and inhibits the immune response, allowing the disease to progress without pain or fever.

Treatment with rifampin, combined with either streptomycin intramuscularly, clarithromycin or moxifloxacin for 8 weeks in addition to surgical wound management to débride necrotic tissue, is used to treat Buruli ulcer.

M. chimaera strains can be misidentified as M. intracellulare unless sequencing techniques are used. M. chimaera is commonly found in the environmental water and soil, and is a known cause of pulmonary disease. However, M. chimaera infections have been recently reported to follow exposure to certain heater-cooler devices (HCDs) — specifically, the Stöckert 3T (LivaNova PLC) — during cardiac surgery. These infections include bloodstream infection, vascular graft infection, sternal wound infection, spondylodiscitis and prosthetic cardiac valve endocarditis (PVE), complicated by paravalvular leak, paravalvular abscess or cerebral abscesses.

Initially, in June 2013, a report described two patients who developed M. chimaera infections (PVE in one and bloodstream infection in the other) after cardiac surgery 2 years apart (2008 and 2010) at a Swiss hospital. Genotyping indicated a relatedness of the two M. chimaera strains, but no source was found at the time. A later retrospective study uncovered a total of six patients who underwent cardiac surgery between 2008 and 2012 at this hospital and subsequently developed PVE or vascular graft infection. These infections became clinically apparent between 1.5 and 3.6 years after surgery.

M. chimaera was found to have contaminated the water used in the 3T HCDs at the manufacturing site. Genotypes of M. chimaera strains from patients, 3T HCDs and the manufacturing site were almost identical. The water circuits of HCDs do not come into direct contact with the patient’s circulating blood; rather, studies established that M. chimaera was aerosolized by the HCD in the operating rooms, resulting in airborne transmission to the patient’s otherwise-sterile operating field during open heart surgery.

This slowly evolving outbreak has become truly global, based on the worldwide distribution of the contaminated 3T HCDs. As of November 2016, 52 cases of cardiovascular infection caused by M. chimaera have been detected in patients who had previously undergone open heart surgery in seven countries in Europe. Cases have also been reported in the United States (at least 24 cases from at least four different hospitals), Canada, Australia and Hong-Kong.

Although HCDs, including HCDs from other manufacturers, have been found to be contaminated with waterborne pathogens, including M. chimaera, only use of 3T HCDs has been associated with M. chimaera cardiovascular infection. To date, no cases of postoperative infection caused by M. chimaera associated with 3T HCDs manufactured after September 2014 have been reported. However, because of the passive reporting of cases in most countries, the long incubation period, the fact that mycobacterial cultures may not be routinely requested in patients with postoperative cardiac surgery infection, and the difficulty of identifying M. chimaera, more cases likely go unrecognized.

Using whole-genome sequencing analysis, it has been demonstrated that M. chimaera isolates from patients with HCD–associated infections and from the 3T HCDs from several U.S. hospitals (in Pennsylvania and Iowa) were all highly related, which is consistent with reports from Europe.

HCDs are used in approximately 250,000 cardiopulmonary bypass surgeries annually in the U.S. The 3T HCD that has been associated with M. chimaera infections is used in most hospitals around the world and in approximately 60% of heart bypass procedures performed in the U.S. However, the risk for infection was estimated to be low, between one in 100 and one in 1,000 in hospitals where at least one infection has been identified, but was highest in patients who had prosthetic cardiac valves or other prosthetic products implanted at the time of surgery.

Treatment has been particularly difficult. Case fatality rates approach 50%, but not all deaths were attributed to the infection. These bacteria establish biofilms on prosthetic valves or other implanted materials, which necessitate their removal. The recommended treatment regimens for a disseminated MAI complex infection include clarithromycin or azithromycin, combined with rifampin or rifabutin, and ethambutol supplemented with either an aminoglycoside, such as amikacin, or moxifloxacin. The duration of therapy is prolonged — 1 to 2 years. The optimal antimicrobial regimen for M. chimaera infections is unknown and requires further study.

Infections due to NTM are increasingly recognized worldwide. NTM are ubiquitous in the environment, and exposure to NTM may be common in homes, hospitals, long-term care facilities, hemodialysis centers and dental offices, where they are located in biofilms lining the inner surface of water lines. NTM exposure may be increasing because of the popularity of hot tub/spas, misting sprays in grocery stores and in outdoor restaurants, decorative fountains, car washes, cooling towers, ultrasonic dental scaling and other high-speed dental turbine instruments, and aerosol-generating humidifiers, to mention just a few examples. NTM infections are often difficult to eradicate. A prolonged course of therapy with a combination of drugs is required. Unfortunately, persistent or recurrent infection is not uncommon.